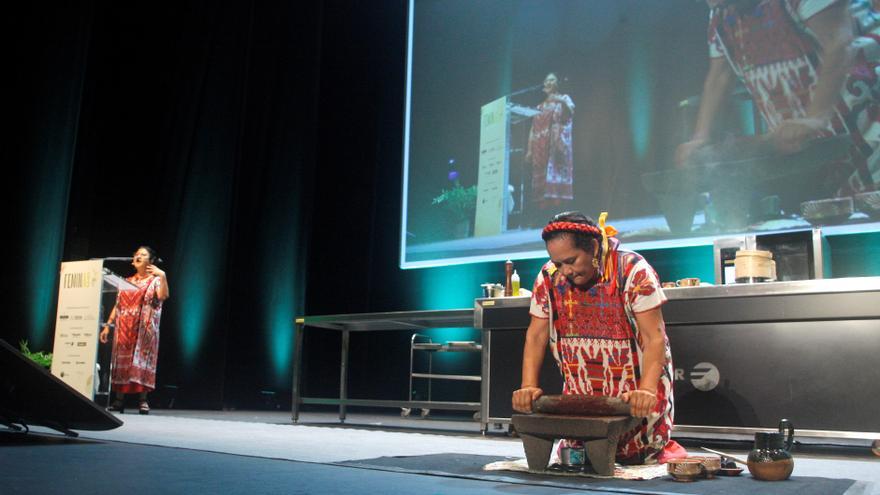 Gijón (Asturias), Sep 13 (EFE) .- The dishes of the traditional cuisine of America, almost always prepared by women, have starred this Monday in the first day of the first International Congress of Gastronomy, Women and Rural Areas (FéminAs) that is celebrated in Asturias until next Wednesday.

The cuisine of rural towns in Argentina, Venezuela, Peru, Colombia and Mexico, based on local natural products, and its relationship with the social and economic situation of women and different communities has been the focus of the debates held this Monday at the La Laboral Theater, in Gijón.

Cassava, a root vegetable native to South America, which is present in the gastronomy of many European and African countries as it has been brought by Portuguese sailors, has been the product chosen by the Argentine cook and television presenter Narda Lepes to vindicate living culture from rural areas.

In her presentation, entitled “Cassava Women”, she said that this tuber has become the main livelihood of the inhabitants of the poorest areas of America and could be an important factor in economic development “if it is given the due attention “.

Cassava is cultivated, processed and cooked by women, it feeds the communities and provides an extra income by selling the surplus and its derivatives such as starch.

This product does not require fertilizers or agrochemicals, it is not affected by vermin because in its natural state it is toxic, and it can be used as a base for an innumerable amount of different dishes and snacks according to each region.

Lepes has considered it necessary for the authorities to support family farming in rural communities, by providing aid for the purchase of tools and small machinery.

The Mexicans Rosario Cruz Cobos and Celia Florian, from the Association of Traditional Cooks of Oaxaca, who have valued the role of women in maintaining the gastronomic culture of pre-Columbian origin, have also intervened.

The cuisine of indigenous peoples acquired a new dimension with the arrival of species brought from overseas and today Mexican gastronomy is present throughout the world, they recalled.

Each region of Mexico has its own gastronomy, although they all have corn as their base, and it is mainly women who are in charge of this legacy, since they constitute 90 percent of those in charge of the stoves in inns and restaurants.

The Mexican cooks have also explained the role that the gastronomic association of Oaxaca has played in supporting women, especially in matters such as sexist violence.

The congress was opened by the Minister of Culture, Language Policy and Tourism of the Principality of Asturias, Berta Piñán, in an event in which the Vice Minister of Tourism, Graciela Blanco, and the Mayor of Gijón, Ana González, also participated.