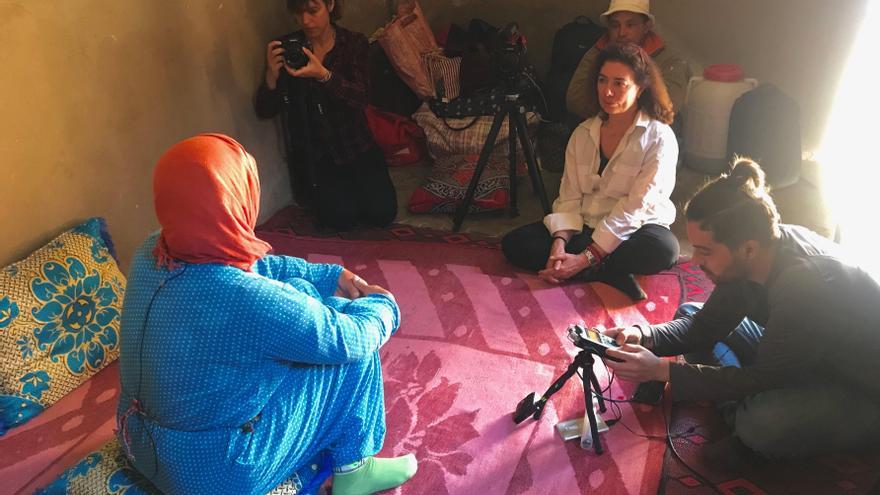 Inspired by the vital circle that begins with her mother (a woman with seven children who became a businesswoman during the Franco dictatorship) and continues with her daughter (actress Alba Fernández), the filmmaker Chus Gutiérrez unravels some of the links in the chain of oppression exerted on women and discrimination to which we are subjected. He does it in the documentary Role & Role, which has been presented at the Malaga Film Festival in Valencia, at the Renoir cinemas in Madrid and, soon, at the Seminci in Valladolid. And it does so by analyzing the representation of women in the media (advertising, press, film and television), and how this affects leadership structures and emotional and political behaviors in society.

For this, it uses the experience and testimony of women with outstanding professional careers in the field of politics, science, art or the media and communication: Nouzha Skalli, Mª Teresa Fernández de la Vega, Mónica Oltra, Anna Serner, María Gimeno, Yolanda Domínguez, Lorena Muñoz and Icíar Bollaín, among others. And it is supported by devastating data on the presence and relevance of women in these areas. Its objective, to transform society and that its documentary is part of an essential engine of change.

Film director and scriptwriter, Chus Gutiérrez is one of the most recognized filmmakers in Spain. Born in Granada in 1962, she studied cinema at the City College of New York and was part of the Xoxonees musical band. She is a founding member of the Association of Women Filmmakers CIMA. He has directed films and documentaries: in 1991 he shot his first feature film in the United States, Sublet, with which he won the Golden Conch at the Atlántico Alcances Film Show in Cádiz. In Spain he has directed Oral sex (1994) and Gypsy soul (nineteen ninety five). The warm (2005) is a film set in the so-called ‘movida madrileña’ and Return to Hansala (2008) narrates the problem of African migration. She has also worked as an actress in I give you my eyesby Icíar Bollaín. His films have participated in International Festivals such as Venice, Guadalajara or Toronto.

How did the idea of ​​making this documentary come about?

Living and observing what happens around me has always been the greatest source of inspiration for me. In 2008 I shot the movie Return to Hansala in a Berber village in the Atlas Mountains, Morocco. By chance, and not by conscious decision, it turned out that the director, assistant director, production manager and other people with responsibility for the shoot were women. Hansala women were mostly illiterate and fulfilled classic roles within the village society. They observed the female recording team in silence and a month after our departure they decided to go to the Council of Elders in the village and communicate their willingness to be part of it. The Council of Elders is the place for decision-making about the problems and needs of the community. When I learned about that awareness and that decision, I realized the importance of models and the strength of being able to identify yourself with an equal.

Had you previously addressed the political and cultural issues that affect women in your work? Do you think this is the time to do it?

When I started making films in the early nineties, I was not aware of inequality and the importance of telling the world through the eyes of women. I suppose I thought that we already lived in equality, but time has confirmed that changes occur very slowly and yes, I think that we are at a time when society demands more speed. The planet is asking us for a profound change and women and their way of doing things have to be part of that change. As a director and as a woman, I feel committed in the fight for equality and in the construction of references that help women and men to create a more just, more complete and diverse society. Many other women are raising their voices for a greater and more constructive representation of women in the media, in the cinema and in different spheres of communication.

However, the figures for that representation continue to be disappointing.

Women and girls make up 51% of the population, but female characters are underrepresented in movies, on television shows, in children’s content, and in advertising. The rendering ratio is approximately 3: 1. I think the problem is not that women are not doing things within culture, science or politics, but that the system systematically silences our achievements and does not make us visible in the same way and with the same forcefulness as our male colleagues . I do not think it is premeditated or malicious, it just happens, and that is why we have to be vigilant, each one, each one, from our small plot of responsibility. Being aware of what is happening is the first step to change things.

Role & Role It is, therefore, a documentary of feminist activism.

I am an activist in my cinema and in my life. I cannot separate what I do from what I feel, and what my intuition tells me is that any positive contribution has consequences. CIMA has managed to make visible the problem of the lack of women in audiovisuals and highlight the power structures that expel them and prevent them from telling their stories, their way of understanding emotions and their vital priorities. As Eduardo Galeano says: “Many small people, in small places, doing small things, can change the world.”

Have you encountered difficulties shooting this documentary stemming from that activist nature?

The patriarchy uses any excuse to attack women and minimize them. It doesn’t matter what we do. The important thing is to be clear about the objective and not lose heart. Financing this documentary has not been easy, since the first reaction of the televisions was to question why we wanted to make another documentary about women. As if all women’s documentaries were the same and we were clones. Also ignoring my career as a filmmaker and underestimating my possible contribution to a fundamental issue in our society.

A contribution that can serve as a reference for younger women.

There is a great majority of women, also men, who want a change. But it is not so easy. That’s why this documentary, to be aware of where we are. It is true that many things have changed, we are not like a hundred years ago, but in reality the patriarchy continues to exercise at ease. For me the important thing is to be aware of where we are and that we have to continue. Because my surprise is that the young women believe that we are at the peak of the struggle, that we have reached equality and that is it, that we are going to the demonstration on March 8 and we are great. No, we are not great. There is an impressive thing that does not appear in the documentary, an incredible fact: of a thousand students throughout Europe of technological careers, which will be the future, where everything will be structured (mathematics, physics, engineering, chemistry, etc.), there is only 29 women. So, how is the future going to be built? From what point of view? When you want to access a job, when you have an interview, how is the algorithm going to select you? Because all the data will have been entered by men.

Women continue to be valued and judged for reasons outside our work.

Exactly, it is a manipulation of the character to mislead, not to mention what is really important: what you have contributed to society, to research, to cinema, to journalism … That goes to the background and then you are not considered as an admirable being. They talk about things that have nothing to do with your professional part. Attention is diverted. But I think we are in a wonderful moment to continue fighting, to think and try to dig deeper, to see how we can make changes. And there the media have an incredible responsibility. To change looks and stop playing cliches. They have a huge responsibility in creating models.