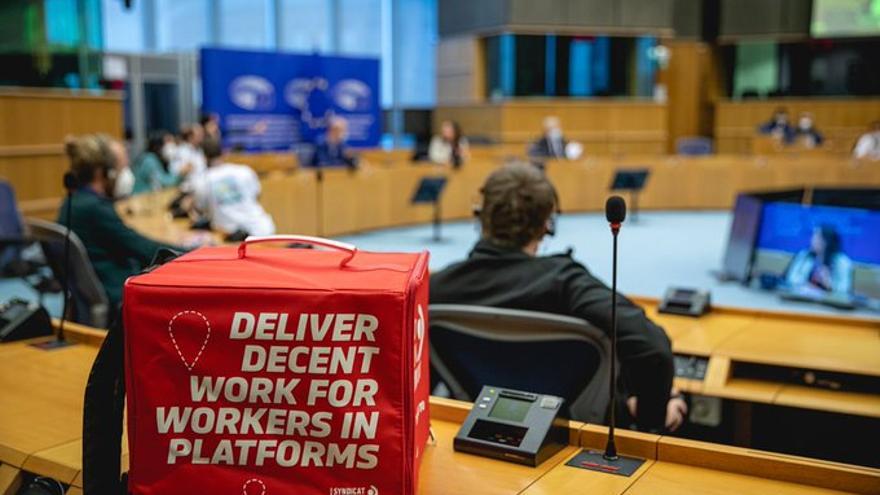 Collectives uberized from various European countries have brought their demands to Brussels. First, in the II Transnational Forum of Alternatives to Uberization, a day organized by The Left in the European Parliament, with the presence also of political representatives, and, later, before the European Labor Commissioner, in a meeting within the European Parliament. The commissioner, Nicolas Schmit, has recognized the danger that the labor protection model of the platforms is extended to the rest of the sectors, as reported later by Podemos.

"It is the worker himself who carries the whip", said a rider at the meeting: "We want to know which companies and lobbies the Commission has met with." The Kellys, for their part, stated: "Algorithms are entering hotels. Besides being precarious women, we now have a mobile that tells us how long we can be in each room. We demand that algorithms be controlled so that they do not enter in all sectors of society. " For its part, a representative of Correos en Lucha pointed out: "Without rights there can be no democracy, without job stability there can be no democracy. They will come to all sectors to continue making benefits. It is time to legislate for the majority and not for a minority." And Tito Álvarez, from Elite Taxi, said: "If the directive that the Commission prepares does not stop the platforms, we are prepared to do it on the street. We want to open the black box of the algorithms and see what is inside." .

Currently, the European Commission is preparing a directive on the rights of platform workers. The proposal will be known at the end of the year. The European Parliament has demanded that they receive the same social and labor protection as the rest of the sectors, that the figure of the false self-employed be fought and that the management of the algorithms be transparent. According to data from the Commission itself, 24 million people - 10% of the European workforce - have participated at some point in the gig economy.

Idoia Villanueva, Podemos MEP and head of the party's International, said after the meeting with Commissioner Schmit: "We came out of a meeting that we have had with more than 50 representatives of different groups and different countries. A very useful meeting because the commissioner has been able to listen to the only lobby that really matters, the workers' lobby. We have seen that they agree that there is currently a subordinate relationship that makes it very difficult to defend themselves against these platforms, and that they also share that the solution of a third statute would not be a solution with rights and guarantees for workers ".

According to what Villanueva has commented, "to the questions of the groups about what Uber, Deliveroo or the lobbies of these platforms have asked them, the commissioner, unfortunately, has not given an answer. At this moment there are still many doubts to be resolved , and the new directive that protects these platform workers has to take into account not only the transparency of the algorithms, but also the fight against tax havens, from which these platforms, these vulture funds, benefit. "

In the previous meeting in a place in Brussels that usually hosts meetings of social groups, La Tricoterie, the testimonies of uberized people have happened, as collected by Brave New Europe. Odile Chagny, from Shares & Workers in France, said that the European directive was only going to open a new phase of struggle: "Nothing assures us that the rights we are going to support ourselves with will be effective."

For her part, Mafalda Brilhante, feminist activist and member of Precárixs Inflexíveis in Portugal, said, according to Brave New Europe: "We have asked that specific legislation be developed to protect these workers, to allow an employment relationship. The platforms have decided to stop working with intermediaries, as a way of putting pressure on the left-wing parties. " Martin Willems of United Freelancers in Belgium, a trade union for freelancers, said: "What do most couriers want? Waiting times paid, guaranteed minimum wage, job insurance, social dialogue to address problems. They want to have the same rights as other workers. That would be the solution. Platforms use the argument of freedom to deny social protection. There is this scam of saying that we give you freedom in exchange for not he has rights. No, we want both. We want rights for those workers, but we also want more autonomy and less subordination. "

And Nuria Soto, from RidersXDerechos, stated, Brave New Europe continues: “The platforms are using anything to say that we are our own boss. Many cyclists say they are self-employed, but when you ask them if they want Social Security contributions from an employee, they answer 'yes'. So what does he want rider, one thing or another? The union struggle is key. We can create alternatives based on the collective, not just the personal individual. Trade unionism and cooperativism go hand in hand. "

“What is being discussed is not only what is the situation of the riders or the drivers, but the attempt to impose a new model of labor relations on all workers. This is not a problem for the groups that are already affected today, but rather it is a threat to the working class as a whole, ”said United Deputy We Can Rafa Mayoral in his speech at the forum:“ With the Spanish Rider Law both Labor inspectors such as workers' representatives will have the ability to open the 'black box' of the algorithm and access what, in reality, are the working conditions that were previously included in a contract. This is the way , we need labor inspectors to become more technical and we also need to technicalize union action, open the 'black boxes' and put the rights of workers at the center ".

Tags: claims, collective, Commission, democracy, European, no, rights, They carry, to have, uberized