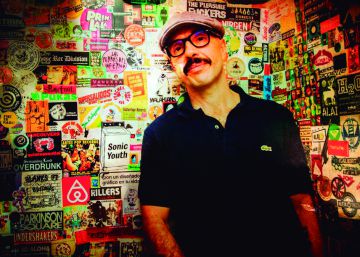 They ensure that in Spain about 90,000 books are published per year. With such a pace of releases, it seems incredible that - for all I know- there has never been a volume that presents an overview of the Spanish phonographic industry, essential to understand the sound evolution of the country and with more than one hundred years of existence. To confess everything, it is urgent to recognize that it is a very bad business, especially after the infamous battles of the "total free" of the Internet era.

But today we will not raise moral judgments. I prefer to highlight such aberrant absence of information, that it would be unimaginable if it were the national cinema or, already in place, the same edition of books. It occurred to me to check if the same thing happens in, go, "the countries around us" and yes, we are the anomaly. There they have general books, apart from works dedicated to certain entrepreneurs or companies.

Given the inaction of the employer of the sector, the Ministries of Industry or Culture and, already put, the SGAE Foundation, I suppose the ball to tell that story should end in the field of universities. The current musical journalism, I fear, no longer has room to undertake investigations of that draft. No one would appreciate it, on the other hand.

I have a telling anecdote. The journalist Patricia Godes launched the program in 2016 Conversations with music, on M21 Radio, which was intended to be a chronicle of Hispanic pop. There they paraded from record labels to producers, through composers and (naturally) musicians, in very prepared interviews. Was that effort rewarded? No. The municipal radio station in Madrid was closed last fall by the right-wing coalition that controls the current City Council, which did not deprive itself of insulting the workers. To finish off the play, at the beginning of this month the website that allowed the recovery of Conversations with music and the other M21 programs.

A calamity but, attention, the witness has taken Sympathy for the music industry, part of the monumental offer –33 titles! - of podcasts from Subterfuge Records, available on Ivoox or Spotify. The program is presented by Carlos Galán, co-founder of the label. It offers an extensive weekly conversation, not even interrupted to play music, with a series of powerful business actors, with special dedication to record labels, representatives and radio managers.

A respectful tone dominates: Galán insists that he does not want to "make nostalgia" (others would say "history"), which prefers to look for the lessons applicable to the present. But he faces great monsters, which might require questions and punctualizations: sometimes, minor lies and lies are sneaked only explainable by the pathology of dissatisfied egos.

Sympathy for the music industry It is a must for business professionals and, of course, for fans who aspire to an in-depth vision of how pop music was made (and spread) in Spain. Perhaps, now that I think about it, the discrepancies in the testimonies respond to the absence of a commonly accepted consensus. As now said, a story that sets chronologies, causes and effects. That is, a story.