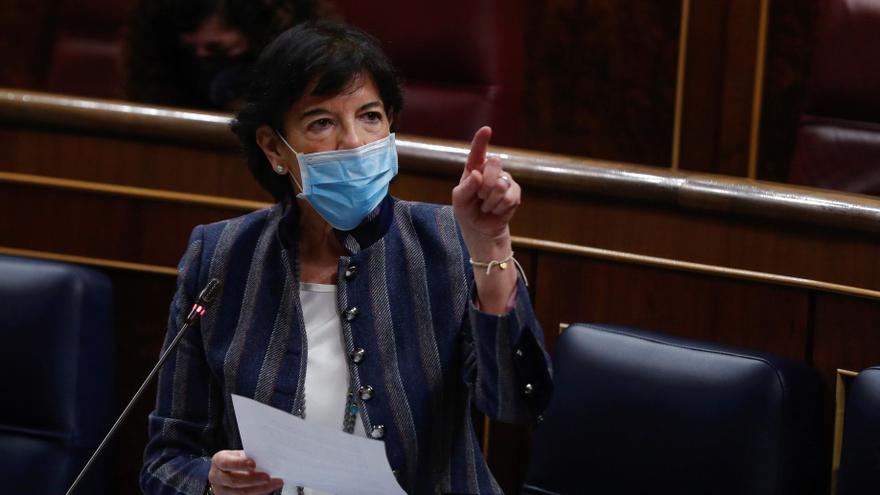 The Organic Law of Modification of the LOE (LOMLOE) approved on November 19 in the plenary session of Congress by the meager number of 177 votes and known by the common people as the Celaá Law, it is for many the worst educational law of the eight that Spanish democracy has seen so far, as for others it was Wert Law, the LOGSE, the LOCE or any other confusing acronyms. All, that is, none, are right. Reviewing – to date – is free, and education is one of these fundamental issues of which every living human seems to be a professor and a distinguished expert of interstellar scope.

Education is essential to the well-being and prosperity of a country. It would be great if all these wise people led by example and expressed their opinions, if not knowingly, then that would be more like asking too much, yes at least with a little of it, of education. Because the political and media sophistry with which this new rule has been received is being anything but polite. The LOMLOE, it is true, has been used as a bargaining chip in the negotiations of the PSOE with Podemos and ERC for the approval of the General State Budgets, and hence it exhibits a greater leftist bias than the minister herself would probably have wished. and the President of the Government, but that does not imply that it has to be bad per se. Let’s really see how this law can affect the 8.2 million schoolchildren in Spain.

His detractors assure that the Celaá Law intends to close the special education schools where thousands of children with different degrees of disability are attended, which will force them to refer these children to ordinary schools; that the Government wants a teacher who lacks the necessary training to attend to the needs of children with severe disabilities while simultaneously teaching thirty other children; and that neither these will be able to advance nor those will be taken care of as they need. And, as if that were not enough, and this is true, it does not detail how or who will finance this adaptation of the centers.

But the reality is that this measure is based on a UN report that concluded that the integration of children with special educational needs was necessary so that they would no longer be taught in isolated and discredited centers. And no, of course the new norm will not end up leading to the disappearance of special schools, but what is wanted is to adapt traditional schools within ten years so that they can accommodate more children with disabilities and attend school. special education centers only those school children who cannot be attended in ordinary centers because they need a very specific education, given the scope of their dysfunctions.

The LOMLOE eliminates the vehicular character (expression that appears for the first time in 2013, in the Wert Law) of Spanish or Castilian, so that children whose families want their children to use the Garcilaso language as the main tool in their instruction will be cut off their rights, says part of the mob. They already were, but the law formalizes the discrimination of Castilian-speaking children by depriving them of a legal basis to claim their right to receive at least part of their core education in Spanish. In practice, autonomies like the Catalan one had already cornered Castilian from the classrooms in the face of the passivity of the different governments of the PP and the PSOE. So, the Assembly for a Bilingual School of Catalonia analyzed a few months ago 2,214 educational programs in Catalan public schools and did not find any in which the vehicular language was Castilian, so in reality the article of the Celaá law does not change anything. Esquerra, nobody denies it, threatened not to support the Budgets if this requirement was not included, but it will give the same, because the stubborn reality shows that Catalan, Basque or Galician students dominate the language of Quevedo at least as well than the rest of Spaniards. And so it will always be, by the way, because no one can be so obtuse to renounce such beautiful and precise communication with more than six hundred million people.

Another common place these days is that the Celaá Law further sinks the already minimal level of demand of Spanish public schools and allows students to pass the course without limit of failures. It’s false. It is possible that the most radical wing of Podemos would have wished it that way, but the only thing that the new norm contributes in this regard is that it will be allowed to pass high school with a failure, something that has created a notable scandal, but which is common practice in the cloisters of centers since social pressure determines that children have to be approved just because, whether they deserve it or not, and this has been a couple of decades ago.

On the other hand, the most devout think that this law violates Article 27 of the Constitution that recognizes the freedom of education and the right of parents to have their children receive “religious and moral training that is in accordance with their own convictions.” Perhaps Iglesias and Sánchez wanted it, but the agreements with the Vatican of 1979 – which the Government wants to renegotiate – prevent the suppression of Religion from the supply of subjects, although now this subject will not have an alternative. It will appear – if the student chooses it – in the report card, but it will not count, which will cause many students who chose it to improve their grade in high school – instead of French or Technical Drawing, for example – do not take it, This may mean a loss of jobs for religion teachers, who are not civil servants even though they are paid by the State, but permanent or temporary appointed by hand by the corresponding bishop. But, it would be missing more, each family will be able to continue choosing the religious and moral formation that it considers opportune.

And we’ve saved the best for last, like in a good Disney movie. In the opinion of its fiercest critics, the LOMLOE puts a death date on the charter school. It eliminates it, it extinguishes it. It exterminates it. They assert that this law confuses public education with state education, since public education includes both state-run and concerted schools, which are as public as state ones, only that they are governed by teachers, foundations or other types of organizations. According to them, what the Celaá Law intends is to end parents’ freedom of choice and freedom of education, so that the only possible public education in Spain is that given directly by the State and thus can indoctrinate future students. voters from a very young age.

But that is not true. The great objective of this law is to achieve an equity in the Spanish school that does not exist today. Nowadays, nine out of ten children without resources and eight out of ten Children of immigrants are enrolled in public school, despite the fact that it instructs 67.1% of the students (the private one for 25.5% and the private one for 7.4%). That is why the law establishes that the proximity to the center prevails when enrolling a child. Each autonomy will set for each school a quota of students with special needs ―the ratios will be lower in sensitive areas―, there will be “living places” for enrollment during the course (often immigrants), it will not be possible to assign public land to build a school private or admissions processes will be more transparent. Likewise, the Government wants to stop the bleeding of irregular fees paid by parents, widespread in concerted teaching, that also the families are deducted, although it is prohibited.

And nothing more. And nothing less. And everyone who has an opinion what they want, but who is instructed and informed a bit before opening their mouths to fly with various excesses one or another flag representing one or another style and educational content. And that we pamper our children. And to their education. Because without them there is no present and there will be no future.

Tags: education, no, to have