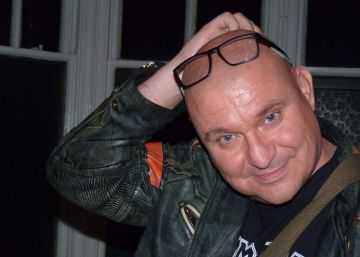 Washington Poe is a disgraced policeman, cynical, with serious problems with the authority, who looks for his way at any price, with a turbulent past … Does it sound like? Well, that’s the protagonist of The puppet show, a novel by M. W. Craven who won the Gold Dagger in 2019 and now publishes Roca in Spain. And yet, Poe hooks from the first moment without falling into the topic or gloating on it. Craven, who enlisted at 16 in the British army and spent a decade touring the world to end up as a probation officer, turns his life experience into a well-constructed plot, which is based on the figure of a psychopath and in a counterpoint to the protagonist, Tilly Bradshaw, a gifted with few social skills.

A book with known ingredients and that, Craven confesses to us as he passes through Madrid, is just the beginning of a long saga. In the United Kingdom the third comes out in June, but he is already thinking about the argument of the seventh. “We’re talking about 2024,” he says amused. “I like Poe. If we were in the pub I would like to talk to him and possibly he would send me to fuck. I would look like a guy too liberal for his taste, ”he says of his creature.

QUESTION: In front of the protagonist we have a psychopath who is burning people in prehistoric stone circles. A clever assassin who leaves no trace and who is allowed, invoking Poe, to play with the police. The stories with well-resolved psychopaths, with characters that, well done, are immense (Hannibal Lecter, Nesbo’s Snowman, Mr Pudd de Connolly …) work very well, but, if they are exaggerated or fail at something they make everything fall . Why take a chance on a first novel?

REPLY: It is true that if it is not well written it is almost a comic character. For me, although this psychopath is doing terrible things, the motivation and what happens in the end is based on reality, on what I knew from my direct experience as a conditional officer. My job at the police station was to discover why people had done what they had done. All the murderers of my books are going to have a legitimate motivation in their view, explaining why they are doing what they are doing.

P: Tilly Bradshaw is the counterpoint to Poe, a character who remembers the Holly that accompanies Bill Hodges in Mr Mercedesby Stephen King. I take this opportunity to ask you, what have been your influences within the genre?

R: Tilly receives influences from the King trilogy, Mr Mercedes, which I have read and I love it. There is also some of The Big Band Theory. It is a combination of people I have met in my life. It will kill me if I say so, but my wife has a lot to do with that character. In a broader sense my big influences in this genre are the bigwigs (Michael Connelly, Dennis Lehane, Don Winslow …) or a fantastic author who is not as well known as he should in Spain, Chris Withaker, who won the Dagger with Your first book. I also try to read books by authors who have not published anything, because it is interesting to read fresh ideas from arriving authors.

P: His biography is very different from that of most writers, but what does all that previous life contribute to him at the time of writing?

Poe ignores something bad because he believes that, in some way, justice has been honored. I think it’s okay? I don’t know if it’s the right question. Do I empathize with something like that? Yes

A: I am like a sponge. I remember conversations I have had 30 years ago, although I later forgot the name of my wife’s best friend. I am able to remember a funny insult that someone said in the Army in ’85 and use it at the right time. Obviously what I write is a mixture of all those experiences that I have lived, that have also shaken my values ​​and that I suppose also emerge in Poe.

P: The relationship of the characters with evil is complex. There is a time when one of them says: “It was not about doing justice. It was revenge. ” Poe himself transgresses the norms to save lives if he considers it necessary or to punish the wicked. Is it legitimate to do evil to fight against a greater evil?

R: Poe has done things that would surely have killed him in jail if he had been brought before a judge. And there are parts where he ignores something bad because he believes that, in some way, justice has been honored. I think it’s okay? I don’t know if it’s the right question. Do I empathize with something like that? Yes. Would you do the same? I don’t think it’s so easy to answer unless you’re in those circumstances.

P: In this procedure the investigation advances with tension, without excessive manipulation, all the pieces fit together. Did you think about the structure of the story from the beginning?

R: No. I always start with crime because of my previous work I always wonder about motivation. Once I know the crime, I put Poe and Tilly to solve it. The investigation has to give the impression that it is very real and this means that there is not much left at the mercy of the deduction, that there are not too many jumps, or big surprises at the end. If something is going to be important it has to be very clear before.

P: The novel points directly to power (to the economic one, to the policeman who hides the truth, to the ecclesiastical). Do you think social reporting is an essential element in the police genre?

R: During my time at the police station I worked mostly with people who had no voice in society, who had grown up without being given the opportunity to express themselves. People who are in office, in situations of power, are usually idiots, have veiled interests and defend them by keeping people who have taken them there and lying and Poe lives this reality