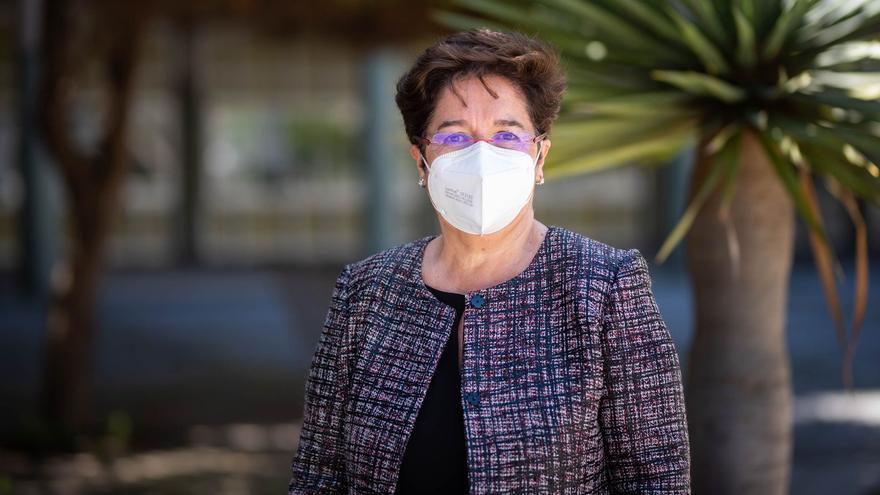 Two years ago it was proposed to occupy the M chair of the RAE, which was finally left by the playwright Juan Mayorga. The philologist Dolores Corbella Díaz (1956, Santa Cruz de Tenerife) She is once again a candidate to enter the Royal Spanish Academy, this time she aspires to the i left vacant by the biochemist Margarita Salas (1938-2019) together with Paloma Díaz-Mas (1954, Madrid). The guarantees of the Canarian researcher are Emilio Lledó, José Manuel Blecua Pérdices and Pedro Álvarez de Miranda, who already signed in favor of the professor from the University of La Laguna when he maintained the first pulse with Mayorga. The Madrid writer, for her part, has the support of Jose María Merino, Luis Goytisolo and Soledad Puértolas.

Dolores Corbella aspires to be the first Canary non-resident in the capital of Spain –until 1960, academics were obliged to live in Madrid– to access the Royal Spanish Academy. The natural replacement of the physicist Blas Cabrera y Felipe (1878-1945). Before that, Juan de Iriarte (1702-1771), Bernardo de Iriarte (1735-1814) and Benito Pérez Galdós (1843-1920) contributed their knowledge to the RAE.

Margarita Salas, Gregorio Salvador (1927-2020) and, again, Pedro Álvarez de Miranda were his guarantors in 2019. “It gives the impression that they want me there,” says a candidate who, at the same time, cannot hide a smile. she confesses to being intimidated by this call. “I should be a bit more used to it, but I’m very ashamed to appear in the media.”

In addition to seat i (Margarita Salas), seats d (Francisco Rodríguez Adrados), K (Federico Corriente Córdoba), and q (Gregorio Salvador) are currently free in the RAE. The Cordovan jurist Santiago Muñoz Machado is the director of the Royal Spanish Academy and the Asturian historian Víctor García de la Cocha is its honorary director. When Dolores Corbella Díaz was asked to participate in this “struggle” a few weeks ago, she only asked for a few days to think about it. “He had time to dedicate himself to this great responsibility, but he needed to assimilate the offer and assess coldly what it could offer him,” he says at one point in the conversation in which the Canarian aspirant describes her day to day: “I am a person who likes to work calmly, like most researchers… Many hours a day, but calmly ”, he abbreviates without subtracting a single gram from the teamwork that has been carried out for decades at the University of La Laguna. “This is a quiet work in which many people participate,” he emphasizes seconds before delving into one of his passions.

The search for a differential lexicon takes on an essential role at the moment in which Dolores Corbella thinks about the answer to a question that has been around her mind for days: What can she contribute in the case of being elected an academic at the RAE? “For a long time we have worked in silence analyzing words, which in addition to being one of my passions have many secrets … It is a job that has not always had a public significance, but that has been valued,” he says in relation to a model of the differential lexicon that is serving as a model in Venezuela, the Dominican Republic and Andalusia.

“In the differential canary lexicon we analyze the history of a word from its origin to the present,” he advances by expanding the radius of action to the media. “Journalism is an interesting field of work because of the amount of twists and turns and new uses that are given to words every day.” How they arise, where and their presence over time are three basic pillars when building the differential lexicon that Dolores Corbella uses. “Being able to discover the etymology of a word is a laboratory task … Recovering the differential lexicon is what makes us different within the unit of Spanish”, highlights the Canarian lexicographer to try to justify her candidacy. “I want to think that they want me to work in dictionaries and enhance the work that I have been doing for a long time ”, he predicts without losing sight of his rival. “With Paloma Díaz-Mas they have sought the profile of a writer who has a good reputation. I don’t know her personally, but I have read some of her works ”.

The candidates for chair i will be the protagonists of the plenary session that will be held on April 15 in Madrid in which the praise and merits of Paloma Díaz-Mas and Dolores Corbella Díaz will be read, for a week after calling the vote, which will come out elected the new academic. “It is very difficult,” insists the Canarian, “but living this experience is quite a challenge, one more of the many that I have already faced.”

Again, as happened a few days ago with the announcement of the 2021 Canary Awards, the woman is the protagonist of a story that is involved in a gigantic social draft. “It may not be normal for some people, but in the future it will be the norm. In the field of research, women have more and more prominence and in my particular case, I have never had problems competing on equal terms to carry out a project ”, highlights Dolores Corbella about the role that researchers play in the actuality.

Patience, without a doubt, is one of the best virtues that the Santa Cruz philologist exposes when it comes to “flirting” with words. “I have a lot of it and I know how to manage it well in the field of research, a work area that also requires perseverance, which is something that I put into practice every day. Without these two things it would have been impossible to travel through a terrain where there is a lot of loneliness and work, ”explains Corbella Díaz.

The “changes” of the RAE

They say we usually remember Santa Barbara when we hear thunder; just with the thunder that announces the storm. Well, something similar happens every year at the moment in which the RAE announces the news that is officially incorporated into Spanish. “The words are not from the Royal Spanish Academy, they are from the people who use them”, Dolores Corbella advances on a matter that in her opinion has no discussion. “What a dictionary should reflect is the lexicon that is used and the brands that are used dailyIn other words, the role of the RAE is to discover new words, not to prohibit them … The speaker is always the one who chooses, the one who makes a word obsolete and the one who gives it more relevance, ”explains the ULL teacher.

Regarding the changes imposed by new technologies, Dolores Corbella’s position is far from absolutist judgments. “I would like to read the accents in the messages that I read on my mobile, but that is an impossible mission. The rush to communicate marks our lives and, incidentally, the forms we use to write those texts … I am more concerned about the fact that today no one goes to a shelf to consult a dictionary because they turn to the online world. There we do have to do a good job so that language experiences a natural leap like what happened with telecommuting ”.

“I am a silent researcher who does not like noise that exists around the media ”. The phrase, signed by Dolores Corbella Díaz, defines the simplicity of a woman who made the news a few weeks ago, along with María Isabel Nazco Hernández and María del Rosario Álvarez Martínez, for the award of the 2021 Canary Islands Award. proposed to join the RAE, but I did not want to say anything because it was not the time, “says a Santa Cruz who lives in La Laguna. She is the oldest of five siblings, four girls and a boy, and the first in the family to study and finish a university degree. “My mother used to say that I and one of my sisters were going to have a difficult time choosing Philosophy and History of Art, that our future was associated with preparing for public examinations, but in the end we have not done badly,” says a lexicographer mother of two daughters who have worked at the ULL since she was 22 years old. “Do not give too much echo to this news”, advances without forgetting that it is “important” that they have remembered her as a possible member of the Royal Spanish Academy. “It is an honor to be in this situation, but at the moment all this is only a possibility and I do not want to draw too much attention,” he says, not without underlining the great illusion that makes him useful to the RAE.