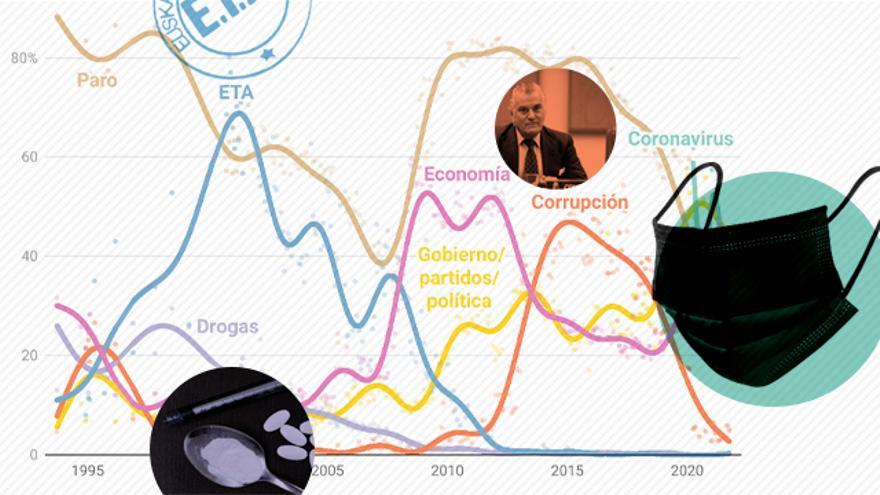 The more than 300 barometers that the Center for Sociological Research has drawn up in the last thirty years make it possible to trace the profile - and the evolution - of each party's number of voters. But they are also useful to look back and understand which phenomena have had the greatest impact on public opinion and, with it, on public and political life in Spain. That is to say: to understand how the concerns of the Spanish have changed in recent decades.

One of the most paradigmatic cases is the impact of COVID-19 on the lives of citizens. The biggest pandemic in recent years became, de facto, the main concern of citizens - beyond the sex, age, educational level or ideological origin of the person - at the beginning of the summer of 2020. Almost two years later, with the 80% of the population with the complete guideline of the vaccine, concern about the coronavirus is at an all-time low. Only 20% of citizens consider that the virus - and the management and care problems derived from it - is one of the three main concerns currently existing in Spain.

But, like the spread of the virus itself, concern about COVID-19 has not been linear. So much so that it went from being one of the biggest problems for almost 60% of the population in July 2020 to being one for less than 40% at the end of August of that same year, coinciding with the stage with the lowest incidence in Spain has registered since the start of the pandemic. After Christmas last year, in the midst of the third wave, concern soared again to exceed 50%, so it cannot be ruled out that the indicator will rebound again in the coming months due to the arrival of new variants of the virus.

Although the coronavirus is the most symptomatic case - since it is able to explain with some clarity the path that the main concerns of citizens tend to have, - from the nineties to the end of the first decade of the 21st century, it has been seen how they have evolved other matters. For example, ETA terrorism. It experienced a substantial increase in the nineties that placed it as the main problem in Spain in 2001, so that later, little by little and with upswings, it diminished until its disappearance ten years later, coinciding with the end of the terrorist gang.

Another major issue that has marked the agenda in recent years is the financial crisis of 2008. Until then, the economy was an underlying problem and concern about unemployment was trading down, although it always remained one of the priority issues for citizens. But during the crisis years, concern about the economy and unemployment soared to its highest in three decades. With the end of the crisis in 2014, according to Spain's national accounts, concern about the economy began to plummet -until October 2018, when it re-emerged again-, but the unemployment problem did not begin to drop below 80% until one year later.

In other words, although the economy became a secondary issue in 2014 with the end of the financial crisis in the state framework, concern about unemployment remained at the top until declines in the rates of employment began to be seen. unemployment, especially from the first quarter of 2015. Currently, unemployment is the third most important problem according to citizens, behind the economy and politics (governments, parties and politicians).

These data also help to understand political disaffection in Spain. As a result of the financial crisis of 2008 and with the beginning of the protests in Puerta del Sol shouting "They don't represent us", the political class has suffered a continuous wear and tear that places it as the main problem for citizens today. today.

Sandra Leon, PhD in Political Science from the Autonomous University of Madrid, commented rigorously almost a decade ago that "although political disaffection in Spain is traditionally associated with citizens who are estranged and disinterested in politics, this is not the case of the growing distrust of the Spanish citizenship ", since" disaffection is not the result of carelessness or negative attitudes towards politics in general, but of dissatisfaction with the functioning of the system. "

The truth is that concern about politics in general has been growing in recent years, but concern about government action - whether in the management of the pandemic, government crises, etc. - has grown, on everything, between the voters of the bloc of the right. In the last fifteen years, the right wing has experienced a substantial growth in concern about government action, especially in periods when they have not governed. In 2010, for example, just before the first legislature of Mariano Rajoy began, one in ten voters on the right considered the Government as one of the three main concerns of the moment and ended up falling below 2% with the arrival of the leader. conservative to the Moncloa.

At the end of 2018, with the motion of censure that promoted Pedro Sánchez to lead the Executive and with the irruption of the extreme right in public life, concern for the Government soared among the voters of the PP and Vox to place itself above of 15% within the block of the right, while the left has certainly remained stable, below 5%.

It has been said that the main concern of citizens is the political class. However, it is interesting to see how current problems evolve since the arrival of each president to Moncloa. To do this, the percentage of concern that a specific issue supposes at the beginning of each legislature is compared to see the evolution during the days in office of the president-elect.

In the most recent case, in the second term of the socialist leader Pedro Sánchez, concern about the economy has increased, with a net growth of more than six percentage points, going from 28% in January 2020 to 34% in October 2021 On the other hand, although unemployment has decreased by half during 2020, it is experiencing a significant rebound in 2021 and is placed as top three of the problems for almost half of the population.

In the following interactive you can see the most important issues for citizens during each of the governments from the fifth legislature, the last of the socialist Felipe González as president.

Some specific cases can be highlighted. In the first stage of Mariano Rajoy in Moncloa, in the period between 2011 and 2016, corruption was the issue that grew by far the most. It went from an index of 100 to 687, that is, the concern multiplied almost by seven, going from 6% to 38% in just three years, temporarily coinciding with corruption schemes such as the Punic or the Gürtel.

During the first stage (2004-08) of José Luis R. Zapatero as president, the financial crisis broke out and, with it, fear of the economy soared, as mentioned above. Concern about immigration also grew, which increased threefold after the sustained growth of immigrants residing in Spain.

The two legislatures of José María Aznar were certainly calm. As an exception, in the first legislature the concern for ETA stood out and, in the second, the housing problem went from being residual to being a priority for one in four citizens. It is plausible to think that this phenomenon occurred after the announcement of housing liberalization and deregulation, which led to double the price of free housing between 1996 and 2003.