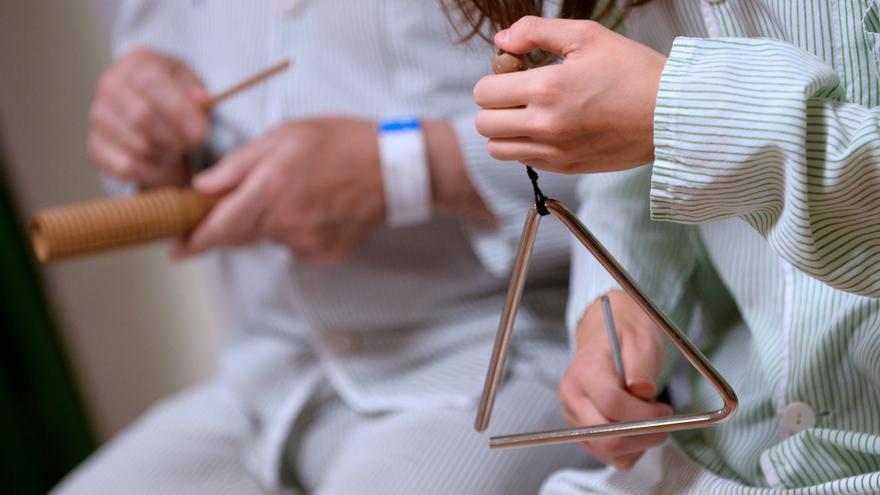 Madrid, 22 (EFE) .- To reduce physical pain or anxiety and stress generated by hospitalizations, as well as humanize the health experience and even facilitate a calmer end of life, the “Musicians for health” collective leads the music to 44 hospitals in the Spanish geography for six years.

It was an initiative of Guillermo Giner, who, after spending a year accompanying his mother in the hospital, realized the loneliness, anguish and lack of joy of his mother and that he only smiled when he saw him arrive or when he put him music.

The idea of ​​founding “Musicians for Health”, together with the Social District Foundation, came to him at a meal with a conservatory director and a musician who had developed a similar initiative with older people.

In 2015, he decided to launch it despite the “stupor” shown by the health authorities of Valencia when Giner told them that they did not want to act in the hall or assembly hall of the hospitals, but in the rooms or “where they need it most. patients ”.

Since his first performance at the Lluis Alcanyis Hospital in Xátiva, “Musicians for Health”, he has performed thousands of micro-hundred in more than 40 hospitals and more than a hundred social and care centers.

After verifying the benefit that this activity brings to the sick, the Association has initiated a collection of signatures to ask the Government to legislate to incorporate the arts into the health system for the benefit of patients, as is the case in neighboring countries.

According to Juan Francisco Blázquez, from the San Carlos Clinical Hospital in Madrid (one of the participating centers), both mental and physical improvements are found in patients through music.

“The stay becomes more pleasant and enjoyable for them as well as their mood and sociability improve. There are even patients who coordinate their appointments to be able to coincide with the music sessions because they notice that it is better for their own health ”, explains Blázquez to Efe.

He remembers how a person was “lying in bed and barely related, got up, went to the room where the musicians were playing and stood with the flamenco cajon”.

In addition, Blázquez details that music not only relieves hospitalized patients, but is also a great therapy on many occasions, as happens in pregnancies with classic compositions that reduce “cortisol, a hormone that marks stress.”

“Musicians for Health”, which is present in almost all the communities, works in Madrid, through the Healthcare Humanization Plan coordinated by the Ministry of Health, with the San Carlos Hospital.

One of her collaborators, Katia Marqués, assures that the micro-concerts in health and social-health centers have changed her life and made her go from “wanting to succeed on stage to studying music therapy in order to know better and help patients better”.

He describes as “very shocking” his first performance in a hemodialysis center in which one of the patients asked him to sing “Think of me.” When he finished singing the bolero, the man cried. That made him realize that “that’s what I wanted to do.”

The artist, who also collaborates with residences for the elderly, recalls how live performances were suspended during the covid pandemic and it was necessary to resort to online platforms to encourage those who had lost friends or loved ones with music.

He recalls how he was moved to sing “Happy Birthday” to a 100-year-old woman in a nursing home or when he sang the bolero “Bésame mucho” to a person with Alzheimer’s, who burst into tears with emotion.

The singer explains that she works with a repertoire of more than 600 songs, ranging from “classic boleros to reggeaton”, to adapt to the requests of the patient “abandoning the artist’s ego” and putting herself at the service of the patient.

Despite the suspension of live performances due to the pandemic, Juan Francisco Blázquez assures that they want to give continuity to the “Musicians for Health” project and regain presence, which in this activity “has a very important added value”.

Colombiatex and Colombiamoda, invigorated by the catwalks and presence