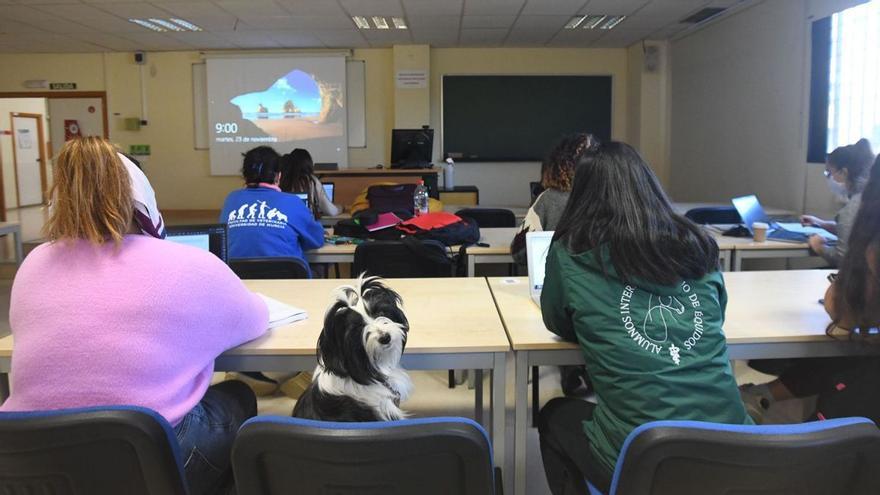 A group of students occupy the rows of desks that make up the José Luis Sotillo de la Faculty of Veterinary Medicine of the University of Murcia. A common picture if it weren’t for the fact that, in their midst, as if it were one more, sits a bitch that seems to listen carefully to the lesson. It is a curious image that has an explanation, told by its own protagonists to The opinion.

Veterinary students at UMU have the possibility to attend class with your pets if they need it, “as long as the animals behave well and do not interrupt the class,” explains José Murciano Pérez, professor of Surgical Pathology and Special Surgery, a subject he teaches in the fifth and final year of the grade.

The teacher has already encountered the situation of a student asking him to enter class with his dog on several occasions. “For my part there is no problem, the animals are used to living with the students on the floors and they behave well, they do not interfere with the teaching“, he assures. An opinion shared by the vast majority of faculty professors, since, as far as José is aware, none of his classmates has objected to four-legged friends entering their classrooms. Of course, For reasons of safety, comfort and / or hygiene, animals cannot access some areas of the faculty, such as laboratories, the interior of the cafeteria, the farm or the hospital.

“I feel empathy for those who for whatever reason one day have to go from here to there, do not pass through their apartment, and they need to be accompanied by their dog“, points out Murciano Pérez, who adds that” the students thank you and also create a closeness that helps them attend and get more involved. ” trust with which to leave her pet. This is the case of Alba Usó, one of the students who on some occasions has gone to class with her dog Shasha. “She is very good, she does not bark and she even seems to like being there” , says the young woman, a resident of Murcia but a native of Castellón.

“Teachers never make a problem for us, also because we know the limits. No student would think of trying to take his dog if he knows that he is nervous or barks a lot; or to any other pet that cannot be controlled, “says Alba. Her dog, a Tibetan terrier, not only does not bother, but seems to cater to teachers’ teachings more than some students. “She is very calm and seems to like it,” says its owner.

“During a class I put Shasha as an example of attention“, laughs Professor Murciano, who has been a sponsor of three promotions of Veterinary Medicine at the UMU. The good harmony he has with the students has led him to have a high pass rate, close to 90%.