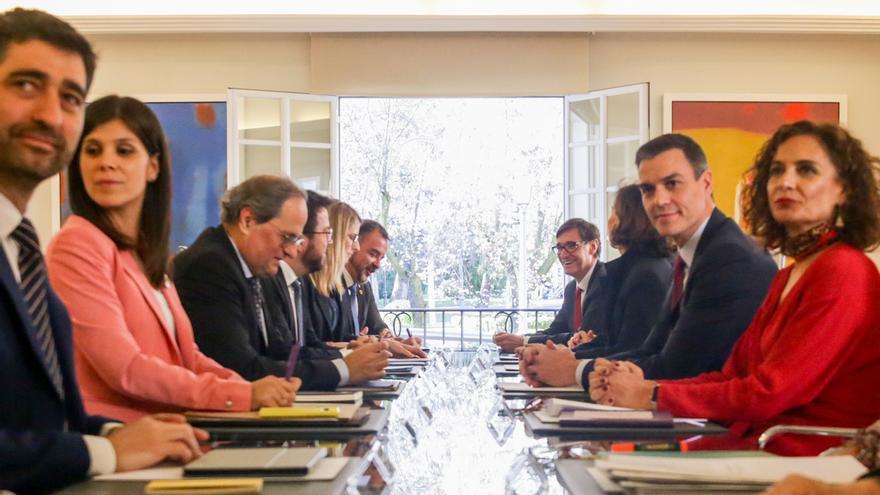 Catalonia has been in pre-electoral mode for months. Since the Catalan High Court of Justice sentenced Quim Torra to disqualification for disobedience by not removing the yellow ties from the public buildings of the Generalitat, the threat to press the red button for calling elections has flown at almost all times except for the months in which the country was confined after the alarm decree. Now all the parties assume that the appointment with the ballot boxes is close, although there is no specific date. And that, in this scenario of fragmented majorities, has collateral effects: the two members of the Govern look at each other askance but the consequences are also felt in Madrid, where the Government of Pedro Sánchez is aware that competition at the polls complicates the position ERC for the approval of the General State Budgets.

That ERC dependency has bothered Sánchez from the moment the polls of the last general elections were opened. Socialists consider that it is not a reliable partner for the fight it has for the hegemony of independence with JxCat. And with Catalonia in campaign, the Executive recognizes that its support for budgets is uphill. Still the appeals do not stop. “I want to think that it is in the majority,” said the spokeswoman and finance minister, María Jesús Montero, last Friday.

Montero does not leave the script and assures that he works with the scenario of presenting the public accounts for 2021 “in time and form”, that is, on September 30. . Sánchez was less restrictive this Thursday in an interview in La Sexta: he chose not to tie his hands and not set a specific date. “I would like them to be there before the end of the year. It will be closely linked to the degree of achievement of EU funds”, was the president’s generic response. However, socialist sources do admit privately that budgets should be matched to the date that Torra determines for the Catalan elections so that ERC has a clear path to be able to settle accounts that give the government air without it taking its toll on the ballot box.

Regarding the Catalan electoral calendar, there is no certainty, although there are some clues. The first is that the Supreme Court will in all probability confirm Torra’s conviction, which will definitively separate him from the Govern. Another question that is taken for granted is that the Parliament will not invest a new president without first going through the ballot boxes, something that the House could do but for which a majority impossible to articulate now is required. The third issue that can also be advanced is that Torra prefers to be the one who calls the elections, without giving room for the court to “force” them.

All of the above leaves a narrow time bracket between September and November. The campaign machinery of the parties is already underway, but it is foreseeable that by autumn the electoral race will already be the only theme of Catalan politics, with the focus placed especially on the tight competition between JxCat and ERC. It will be then the moment in which the most expensive will be the votes of the republicans in the Congress, since any pact or support to the Government can be used with a weapon by the Puigdemont supporters, who do not want to give oxygen to Sánchez and have voted against the alarm decrees.

This situation can also be extended beyond the electoral date depending on the results and the composition of the Parliament that comes out of the polls. After a stormy legislature between the members of the Govern and in a very open scenario, nothing guarantees that the journey towards the formation of the new executive is easy or that from the first moment electoral repetition is ruled out. If this happens, the 13 votes of the Catalan republicans for the budgets may continue to be difficult to obtain for several months and even until the end of the year.

Juggling not to anger anyone

However, the Catalan republicans not only attribute the reluctance to support the budget project to the possible elections, but in recent weeks the relationship with the investor’s allies has been strained due to the government’s approach to citizens and the lowering of expectations. of some of the measures previously agreed -such as the repeal of the labor reform- in the conclusions of the reconstruction commission.

ERC warnings have been constant for the past few weeks. “It looks bad,” said the spokesman, Gabriel Rufián this Friday. In reference to the budgets, a few days before, in the framework of the reconstruction negotiation, the deputy Joan Josep Nuet, who warned the Government about his intentions to agree with the PP on a position for Europe based on the stability pact that confines increasing public spending. “If this announced pact is fulfilled, the Social Budgets that address reconstruction will not be possible. Or it will have to be agreed with the PP,” he sentenced.

In Moncloa they see a certain margin for Citizens to end up facilitating the approval of public accounts due to the approach that Inés Arrimadas has fostered with the Government during the COVID-19 crisis. The Executive left to point out ERC as a priority partner for budgets and summons broad support. However, in the PSOE they find it difficult to maintain that harmony in the face of public accounts and trust that it will be the allies of the investiture who will finally support them. In fact, the deputy secretary general, Adriana Lastra, insisted again that they will look for the forces that allowed the coalition to get going. “We hope that when the budgets reach the Chamber they will have significant support from the investiture partners and also from other forces, such as Ciudadanos or even others who did not support us in that investiture,” he said at a press conference this Friday at the who sent a message: “Reaching agreements with other forces is not giving up on your principles, but making them possible and viable.”

United Podemos does not hide the reluctance generated by an eventual alliance with the Arrimadas party. “We know their policies of privatization and dismantling of public services. Is an understanding viable? I think not, because parliamentary mathematics is what it is”, said the second vice president, Pablo Iglesias, in an interview on RNE this Friday. “I think that the block of the investiture will be that of the Budgets”, predicted Iglesias, who warned the PSOE that they are not going to “give up a single point of the Government agreement.” “In the end, the only possible agreement for the budgets will be that of the investiture, “he sentenced.” It is not right to say with Citizens not when we still do not even have a budget project, “said the spokesman, Edmundo Bal.” “The philosophy is to reach agreements, which is what the people. People are afraid, “he added at a press conference in Congress.

The situation is very preliminary and, basically, what underlies it is the lack of knowledge of where the tiles on the board will definitely be placed. What everyone in the government agrees on is that the priority objective is to get the budgets ahead, since those that are still in force were prepared by Cristóbal Montoro in 2017 during a very different situation than the one the country is currently experiencing.

The Executive, yes, has been juggling for weeks to maintain the balance between the allies on the left and the alliance with Ciudadanos. Thus, Sánchez has maintained the will to dialogue at the table with the Generalitat, with the commitment that he meet again in July, despite the fact that the Arrimadas party sees it as an obstacle difficult to overcome. “Are they government partners? No, they have denied that possibility themselves,” said Rafael Simancas, trying to reassure the forces that supported the investiture.