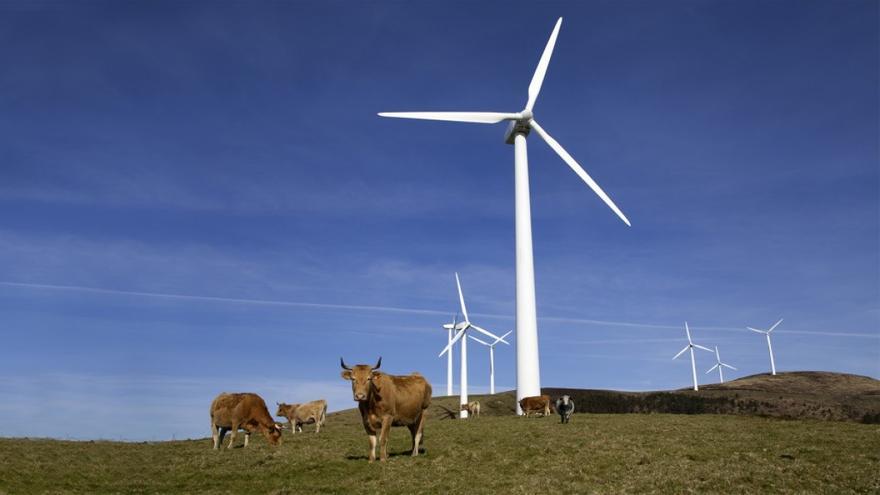 Spain is rushing to make up for lost time with renewable energy to do its part in the fight against the climate crisis. The commitment is to produce a large amount of green electricity based on wind and sun in 2030. From the current more than 30 Gigawatts to 89 Gw. To achieve what was promised, the acceleration is already here. The very rapid proliferation of very large projects to take advantage of this open field raises more and more fears where huge wind farms with gigantic windmills are being drawn.

The last Sunday, the Teruel Existe platform protested precisely because of the fear raised by the renewable expansion model in the province: a cluster of 22 wind farms projected in the east of the province. But concern about the accelerated implementation of infrastructures has already sprung up in Cantabria, Asturias, Galicia, Catalonia, Castilla y León and the Canary Islands.

"We have to increase the percentage of clean energy. That is unquestionable and we have to do it fast, but all of a sudden it's like running a marathon at a speed of sprint and speaking at the same time ", explains David Howell, in charge of Climate and Energy at Seo-Birdlife. This organization warned in January 2019 that, before the foreseeable boom of renewables, a "responsible renewables" plan was imposed.

The common danger, when reviewing the controversies scattered on the map, is the weak regional planning of the territory now that the projects are launched. The authorization of any park smaller than 50 MW is within its competence. "We need the communities to have an organization and a zoning on the host capacity to guide the projects of the promoters. It is necessary to accommodate the state map at the regional level," summarizes Howell. Governments such as the Asturian, Cantabrian or Canary Islands are in the process of preparing these plans while the requests for parks accumulate.

In the Teruel Maestrazgo, the 22 parks of the PEOL-449-AC Cluster project They will be distributed over a dozen municipalities in Teruel and even Castellón. All range between 44 and 38.5 MW and it plans to produce a total of 729 MW. The inhabitants of the area are concerned that large infrastructures installed "in an abusive, accelerated and uncontrolled manner" will take away resources to avoid depopulation: "Nature tourism, cultural and social heritage".

At the beginning of April, a similar protest march that was held in El Bierzo (León) reflected a similar fear: "The destruction and looting of the communal, natural and economic resources of the area," explain the promoters. They call it a "wave of macro-projects." Castilla y León is the community that produces the most wind power in Spain with 257 active installations, according to the Wind Business Association and there are another 100 more large parks on the table to double the power.

The technology now makes it possible to plant huge mills over 150 meters high where there was nothing before. "That scares," Howell admits. Add to that the danger to birds and ecosystems. José María González Moya, director of the Association of Renewable Energy Companies (APPA), understands that this fear is born "when it is perceived that a lot is being done at once, but we need to do a lot to make up for lost time because from 2012 to 2019 there was an almost total stoppage ". González Moya affirms that Spain is on the path of "transforming an entire system based on fossil fuels into one based on renewables" and believes that "except for specific cases, it is being done in a rational way."

The boom is evidence: Red Eléctrica Española points out in its planning project for 2021-2026 that "the expectations of the developers" have meant that the requests to have access to the grid and to pour the electricity that they generate "add up to three times more wind energy" than the objective set by the Government in the Energy and Climate Plan for the year 2026 .

The truth is that 50% of the territory in Spain is classified as "not suitable" to install wind farms due to its "maximum sensitivity" environmental, according to the zoning for the implementation of renewable energies of the Ministry of Ecological Transition. On the other hand, there are 20% (18.2 million hectares) classified as low sensitivity and another 15% (8.2 million hectares) moderate. The calculations indicate that the implementation of renewable energies to meet the objectives of the Energy and Climate Plan delivered by Spain in the European Union needs to occupy 2-3% of territory: between 4 and 6 million hectares.

The problem is that this State zoning was completed in December 2020. In many respects a decade has been lost. David Howell explains that "there is a gap between the analysis of the territory, that is to say, where it is more sensitive to the impacts of the infrastructures, and the projects that were being launched where there is more sun or more wind since the promoters seek a profitability. If that land coincides with protected areas or with other values, yes, of course, an environmental assessment is needed. "

As reflected in the IDAE wind atlas, "the wind resource is concentrated in certain production areas and not distributed throughout the territory." The risk is that the parks focus on fishing grounds wind –or sun–, which results in a saturation and accumulation of damages. In this sense, the head of energy and climate at Ecologistas en Acción, Javier Andaluz, believes that "the occupation and fragmentation of numerous habitats is being generated due to a lack of rigorous and binding planning and selection of suitable sites" which ends , analyzes, "in incompatible renewable projects or of excessive dimensions".

They are observing this phenomenon of attraction with increasing speed, for example, on the Cantabrian coast. Only in the Pasiegos valleys of Cantabria 18 wind projects are in different stages of development. In Asturias there are projects for 70 parks of which a dozen are under construction. The highest concentration occurs in the southwest of the Principality - bordering the Leonese Bierzo-. The situation has led to a score of Cantabrian groups (environmentalists, but also farmers and politicians) have asked the regional government for a moratorium until there is a Land Management Plan.

In Asturias, the Ecoloxist Coordinator affirms that large projects are being divided up to favor the environmental authorization of the Principality. The Asturian Minister of Industry, Enrique Fernández, has replied that the Government is in the process of updating the guidelines to create "a general framework of where parks can be developed and where not."

But the mobilization of local groups does not stop. Just a few days ago, a group of Galician, Asturian, Cantabrian and Castilian-Leonese organizations started a fundraiser to be able to litigate in court against the disorderly implementation of infrastructures that, they say, threaten the "destruction of the Cantabrian mountains due to the avalanche of large-scale wind projects".

Javier Andaluz insists that "it is precisely at the regional level where the environmental problems of many of the specific projects with a high impact are being ignored". José María González Moya from APPA opposes that "there is a control over the development of renewables. The autonomous communities hold the key to environmental evaluation."

However, in the Canary Islands several wind projects are already being settled in the courts. The La Morra project, in Tenerife, was authorized by the regional government without consulting with the City Council involved and declared it of public utility. Later it allowed its expansion. But the Superior Court of Justice has given the reason to the council and has ruled that the works must go back to the beginning.

The Puerto de El Rosario project in Fuerteventura is also facing the magistrates, considering that the mills are too close to homes and bordering on a Special Bird Protection Zone. Also on that island, the Pájara park is planned in the highlands of Guerepe with opposition from the neighbors and the Canary Islands Coalition. The Canarian Executive also alleges that it is preparing an Energy Transition Plan to meet the demands and solve these problems.

Although, at the moment, most of the projects have been designed for the mainland, the wind from the sea is also an energy asset. In fact, in The UK and Denmark most of their wind power is produced offshore. In Germany, half. So maritime parks are coming to Spain. A macro installation in front of the Gulf of Roses in Girona has started this path.

The project, initially planned in two phases, plans to plant 65 wind turbines up to 250 meters above sea level. The promoters estimate that it would be able to satisfy 90% of the province's electricity demand - around 40% in the first phase. But such a line of gigantic mills has put neighbors, the tourist and fishing sector on alert. The Bay of Roses is included in the club of most beautiful bays in the world since 2011. The area of ​​the future park would be closed to fishing. The promoters answer that the park will be planted 24 kilometers from the coast with what the visual impact will be, they say, "minimal". Neighbors question that optimism.

The proliferation of wind farms in Catalonia, one of the most backward communities in renewable generation, has also unleashed a particular war by local agents who oppose their installation. Above all, in the southern regions, where most of the 811 wind turbines in operation and the 770 approved for the next few years are concentrated. Without going any further, this Sunday the affected peoples have called a demonstration in Barcelona. Among its demands is that of a moratorium on these facilities. Until now, Junts, which holds the Department of Territory, has opposed it, but in the pre-agreement of the Government between ERC and CUP, which is now in discussion with the neo-convergents, it is contemplated.

The fourth vice president and Minister of Ecological Transition, Teresa Ribera, recently admitted in a conversation with elDiario.es that the friction between infrastructure and territory is present: "This is a very sensitive issue where we also detect a logical concern on the part of the neighbors. We must address this concern. It is important to integrate renewables and protection of biodiversity." But then he added that "it is also not valid to say 'I want everything to be renewable, but nothing close to me." Therein lies the dilemma.