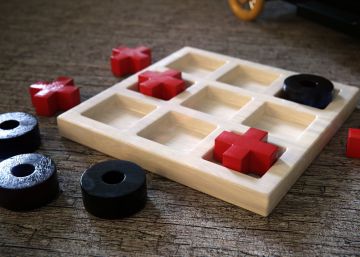 We started by proposing a collaborative game for two players, which we will refer to as Alicia and Berto. The game is known as the magic square (magic square game) and the best way to understand its rules is to consider a square like the one in Figure 1. We choose a row of the square in a random way and we ask Alicia to assign a zero or a one to each of the three boxes that form said row , so that the total sum of these numbers is a number pair. Analogously, we asked Berto for an assignment of zeros and ones for the three boxes that form a random column, adding in this case a number odd. Players win the game if the assignments made match the element of the common box to the chosen row and column (see Figure 2).

The difficulty of winning lies in the fact that the players can not communicate with each other during the game and, therefore, Alicia does not know the column that Berto has played and the assignment he has made and vice versa. However, players can meet before starting to agree on a strategy. If they follow a strategy deterministic, the allocation that they will give to each row and column must be prefixed in advance. In this case, a perfect strategy (the one that wins independently of the row and the column that is chosen) would consist in filling the square with zeros and ones so that each row adds an even number and at the same time each column adds an odd number. The challenge is to prove that this is impossible (see Figure 3) and, therefore, there is no perfect deterministic strategy for this game.

However, surprisingly, it is physically possible to implement a perfect strategy to win this game. So far we have implicitly assumed that the physical systems shared by players to elaborate their strategies and choose their assignments are governed by the laws of classical physics (for example, a square with assignments like the one in Figure 3). This essentially leads to deterministic strategies. However, if players can share physical systems whose behavior is governed by the laws of quantum mechanics (such as, for example, a pair of particles in a quantum state interlaced), then they will be able to develop perfect strategies respecting the restriction of noncommunication. For this, the players would make the corresponding assignments according to the result that each would obtain after making a certain measure on the particle of the interlaced state to which he has access.

The magic square is part of a class of games known as non-local games. In them, the advantage of quantum strategies over classical ones is a direct consequence of the so-called Bell's theorem, which establishes the incompatibility of quantum theory with local deterministic theories. The example we have considered gives an intuitive idea of ​​the quantum advantage in information processing tasks. On it, the current development of quantum technologies such as cryptographic systems or random number generators. However, understanding which nonlocal games give rise to a quantum advantage and what is the optimal probability of victory in each case requires immersing oneself fully in the complex mathematical structure of quantum theory.

Surprisingly, this type of questions are related to open problems of pure mathematics that in their formulation have nothing to do with games or with quantum theory. One of them is the problem of the isomorphism of Alain Connes (Connes embbeding problem), formulated in the 70s in the study of calls operator algebras and that is still to be resolved today. These algebras appear for the first time in a Article of the mathematician John von Neumann in 1930. Interestingly, at that time von Neumann was also investigating mathematical foundations of the then budding quantum mechanics. These two disciplines, although developed independently, have crossed paths on several occasions. Now, almost 100 years after his birth, they meet again, this time in the framework of information theory.

This and other related issues have been addressed in the thematic semester that we have organized in the ICMAT from March to June 2019 and that has brought together more than a hundred researchers from different disciplines.

Julio de Vicente He is a professor in the Mathematics Department of the Carlos III University of Madrid.

Fernando Lledó He is a professor in the Mathematics Department of the Carlos III University of Madrid and a member of ICMAT.

Diego Martínez He has a doctorate from the Carlos III University of Madrid and the ICMAT, as well as a pre-doctoral fellow from the Severo Ochoa project.

Carlos Palazuelos He is a professor in the Department of Mathematical Analysis and Applied Mathematics of the Complutense University of Madrid and a member of ICMAT.

Coffee and Theorems is a section dedicated to mathematics and the environment in which they are created, coordinated by the Institute of Mathematical Sciences (ICMAT), in which researchers and members of the center describe the latest advances in this discipline, share points of contact between the mathematics and other social and cultural expressions and remind those who marked their development and knew how to transform coffee into theorems. The name evokes the definition of the Hungarian mathematician Alfred Rényi: "A mathematician is a machine that transforms coffee into theorems".

The impact of the first asteroid ended the “Snowball Land”