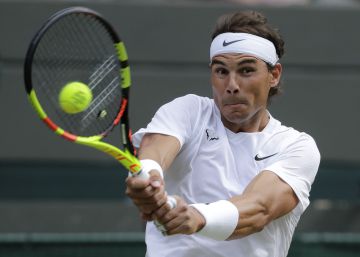 At least six stewards, the same ones who surrounded him in the middle of the morning as he left the warming zone and focused with cannibalistic eyes on Sam Querrey, shot down a few hours later, they would need to reduce the herculean Rafael Nadal that competes these days in London. "Bravo, Rafa!", An elegant lady encouraged him in that morning scene. And bravo, brave again, was the Spaniard during the collision with the American gunboat, which he got down (7-5, 6-2 and 6-2, in 2h 07m) with an intensive course of temper, rest and reaction.

Rounded the way the Balearic, cited again with Roger Federer in the umpteenth classic of 24 carats, a golden day because Roberto Bautista had previously expelled Guido Pella (7-5, 6-4, 3-6 and 6-3) and asked appointment with Novak Djokovic. That is to say, the semifinals of Wimbledon will propose this Friday a poster never before known, because never before had coincided two male representatives – yes female, Arantxa Sánchez Vicario and Conchita Martínez in 1995 – in the penultimate round of the major British, territory that historically has always been thorny for Spanish tennis.

Nadal to Federer, for the 40th time, with the determination of a hungry lion. It will be the fourth that both are measured on the rug of the English tennis sanctuary, receding to that lavish end of 2008 as the closest reference and little more to find the other two episodes, in 2007 and 2006, the two favorable for the Swiss. If only a month ago it was Nadal who was forced to safeguard his Parisian fortress, is now Federer, 37 years old and 20 great, the one who carries on his shoulders the weight of his own fort.

A month ago, in the Bois de Boulogne, the one from Manacor brightened up his dominions in a semi-final of dogs, dominated by the gale that turned the Chatrier upside down, and is now the Swiss (4-6, 6-1, 6-4 and 6-4 to Kei Nishikori) who must answer to his hierarchy on the lawn of London because otherwise Nadal would give him a brutal impact. Beautiful, in any case, the confrontation that returns to give the tennis in a minimum period of time, when not so much ago the saga was talked about only in the key of past.

To disembark in this last appointment, Nadal raffled a package of considerable dimensions. Sam Querrey is not the prototypical bomber, but a rather more complete stem than his physiognomic pattern reflects. He knows how to play well the American, a semifinalist a couple of years ago in London and who processes the game far beyond the mechanics that the grass requires. He knows how to rally Querrey, knows how to place the ball and defends himself superbly with the backhand, then his presence on the other side of the net always poses a bad swallow beforehand. Nadal distrusted, but he applied the script to his heart and resolved it as he had to solve it: he hit first and escaped from the splintery situation offered by the match in the first set.

Then, the tower of San Francisco (of 1,98 and 31 years old) retorted the early break from the Spanish to the third game and threatened the rebellion, but it was only a mirage. Nadal responded immediately, with a hit that decided the first heat and cleared the way to the semifinals, completing the task with a radical contraposition: he made 44 winning shots, and missed only 12 times. And again, their services to the service were spectacular, to give only 10 points with the first serves and adorning the performance with an approach almost perfect (13/14) in the approaches to the network.