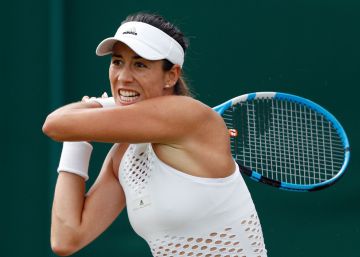 While Wimbledon opened its doors and welcomed the floods of fans before the quarterfinals of the women's box were disputed, a message completely diverted the focus.

"A few words to announce the end of an Extraordinary adventure. 2 Grand Slam and N1 World. More than grateful for these 4 years. Thanks Sam ", he tweeted Garbiñe Muguruza at 10.22, putting an end to a bond that was born four years ago and that did so with the aim of guiding the tennis player to the summit. When the mission was completed two years ago, the rest translated into an emotional carousel that lived its last chapter exactly one week ago, in the London grass.

The Venezuelan-Venezuelan, 25 years old and champion of two Grand Slams, in addition to having reached number one, stamped herself in the first round of the tournament – her worst result in a big one since September 2014 – and went head-down to the corner of her mind. There he reflected and after giving a million turns in his head he came to a resolution: his link with Sam Sumyk was to end.

Dismissal, page turn and blank sheet. After a long period listening to a number of critical voices from the outside, and other internal that recommended a turn to redirect his professional career, Muguruza is determined to start over. Bet on a reset as complex as it is necessary, since once the success was achieved, everything was derived in a toxic alliance that has deteriorated the tennis player's sporting career to dangerous limits. Garbiñe has been lost for a long time and the way to return to his natural place was through a relay on the bench. In this way, Sumyk is already history and the present is occupied by the search for a substitute that "will take time", as they move from their environment.

It closes, then, a cycle that has gone from end to end, from everything to nothing. Muguruza hired Sumyk in October 2015 to try to make a professional leap It would not be long before it arrived. The 50-year-old Frenchman replaced Guipuzcoa's Alejo Mancisidor, his lifelong technician, with whom he began to dream by disembarking in the Wimbledon final that same year. In 2016, the tennis player won her first Roland Garros major, with 22 years, although during that season and several episodes of a tension that in the eyes of the amateur climbed several degrees in the tournament in Miami, the following campaign. "Do not tell me to shut up the fucking mouth anymore," snapped the trainer in the middle of the track, while the cameras focused on him.

The intervention of Conchita Martínez

Later, the absence for paternity of Sumyk -president in Malibu, Los Angeles- coincided with the taking of Wimbledon, but with the help of Conchita Martínez and in a radically different team environment, and the moment of maximum splendor of the tennis player. Later came the ascension to the world throne, in September 2018, but the relationship between the player and the coach continued to be volcanic, very noisy by the brawls and not by new achievements.

The French he digested as an intrusion that Muguruza reincorporated Conchita in February 2018 to advise her in the tournaments of Doha, Dubai, Indian Wells and Miami, and closed that campaign with an insult accompanied by an insult ("fuck you!, he dedicated ") in the middle of a match in Zhuhai.

In spite of everything, Garbiñe always defended before the journalists the Gaul, until last week the reality offered a very striking change. Then, after the varapalo that supposed to fall in front of the 121 of the world (Beatriz Haddad Maria) and hit bottom, he responded when he was posed the possibility of betting on an alternative: "I do not know … But I do not want to talk about that".

The refusal was the prelude to goodbye, even though at the beginning of the year he intended to grant a more credit course to the rude Sumyk, driver of the two Grand Slams won by the Belarusian Victoria Azarenka in 2012 and 2013. "It's a matter of time before Garbiñe again find the way to success, "conceded the French before the bump. But no sign of reaction. Just a few incomprehensible setbacks, tennis stalemate and a couple of minor bites in Monterrey.

So until the current drift, which places it in the 27th position of the ranking and trying to relaunch a career that painted wonderfully well, covered with clouds now. Muguruza must recover the lost ground and he has no choice but to move piece. All part of it, and its maneuver is the first stone for reconstruction, with a decision that responds to logic. After all, at least 15 of the 25 first players on the list have made changes lately on the bench, among them figures like Simona Halep, Naomi Osaka or Angelique Kerber. He had to move the Garbiñe file to start the return route and yesterday he cleared a first obstacle.

Real Madrid fall to Khimki, outstanding bottom of the Euroleague