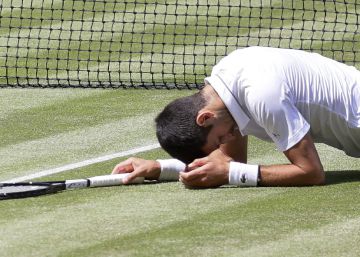 It was witnessed what was promised, what was expected: a match with the face of a dog. And escaped Novak Djokovic, but he had to sweat blood number one, because there are few tougher and tricky opponents than Roberto Bautista, splendid tournament his and formidable resistance in his first semifinal of a Grand Slam. Serbian hands and feet are missing to count trophies and merits, and even so it cost him a world to land in his sixth Wimbledon final (6-2, 4-6, 6-3 and 6-2, in 2h 48m) because the Spanish led him to extreme limits. Nole got out of the mess, but she had a hard time. Yes, it's where he wanted to be, cutting the edge of the scythe while waiting for Rafael Nadal or Roger Federer.

Djokovic spent a lot of time during a good stretch of the game, required from start to finish. It has already been said: a Baptist must be won each and every one of the points, he does not give one. He competed like the angels of Castellón and had much to gain, so he proposed an exercise in survival that the Balkan was successful, not without taking a handful of hot flashes. He had it for a long time there Bautista, but he escaped from the mud. It will attend, then, to its twenty-fifth final of a big one and equaled the number reached by Björn Borg, Jimmy Connors and Rod Laver (6) on the London turf.

He started the pulse on wheels for him, dictating and penetrating with that crossed backhand that cuts like a reaper. By the time you want to notice, the Serbian (32 years old) has already disengaged his jaw and has begun to swallow the opponent. He did this with Baptist, but he dressed in Indiana Jones and interrupted the banquet of the anaconda. He was removing the body and taking out the whip, escaping and leading the game to that area of ​​discomfort that spoke yesterday his coach, Pepe Vendrell. And if in the present there is a circuit player who knows how to entangle him in the game and get him out of his box, that is none other than Castellón.

Nole chokes on that flat right and that Bautista's metronomic tennis, pure reliability whatever the circumstance, always rough and silent like an electric car. He plays like that, apparently without hurting, but as he goes driving the knives. Despite the offensive embedded in the first set, did not crumple. He stood firm and replied in all the rallies. Impressive that of the third set, 45 strokes, after he had already balanced and Djokovic began to pout. Serbian blood began to boil, traditionally prone to easy combustion.

Then he had broken the rope a couple of times, he had made a mistake on the stands that would have applauded the closing of the second sleeve because the last ball had hit the tape, and began to scream that could be heard even in Picadilly Circus. However, awarding himself that kilometric exchange gave him life and took the opportunity to take his finger to his ear, with a challenging gesture: I can not hear you, Londoners. Here is Djokovic. He started from there to recover and to contain much better the permanent response of Bautista, and this began to take its toll on the effort and lost a point of tone.

He sealed the Belgrade in the third set with a volley that gently played the tape, and decidedly committed the final straight to the final. He achieved a break in the third game of the epilogue and another in the fifth, and landed on Sunday with the intimidating aura that surrounds him when he is in good shape. Meanwhile, Bautista was fired between palms throughout the Cathedral, including those of his friends from Ibiza. Now, there is time for the bachelor party, but it was well worth making history and having a few days of glory in Wimbledon. He will remember these two weeks forever, and in London they already have a very good impression of him. The rival that nobody wants.

Valencia CF: Valencia responds to Garay … and explains ‘his’ ERTE: “He was the only footballer who refused to sign the global agreement reached with the entire first team”