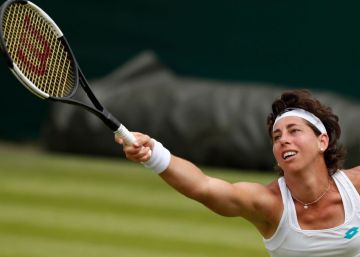 The feeling It was positive from the first days, because in Wimbledon the tennis player feels in seventh heaven. "My big favorite may be Australia, but this place is unique," he says with kindness and good vibes. Carla Suárez, smiling because he is enjoying these London days and now he is even happier, because this Saturday he beat Lauren Davis (double 6-3, in 68 minutes) and agreed to the round of the second round. major British for the first time in his career.

Twice, in 2013 and 2016, he had already reached the season, and now his triumph has Spanish tennis before a historical scenario: if Rafael Nadal wins this afternoon (at 4:00 pm, #Vamos) the Frenchman Jo-Wilfred Tsonga, will appear by first time four national tennis players in the fourth round of the tournament. "I'm happy, really, because it's never easy to adapt to the grass and I do not finish being comfortable, but little by little I'm moving forward," said the islander (30 years old) after getting off the American on Track 16.

Suarez comes to London without making noise, practicing good tennis and progressing from the background. He has not given any set in the three duels against Samantha Stosur, Pauline Parmentier and Davis, and on his horizon appears the ultra-moderate Serena Williams, superior (6-3 and 6-4) to Julia Goerges. "The last time I played against her (6-0 adverse in the global, with the last crossing in 2015, Madrid) was not the Serena of now, logically. It has probably been the best in history and the numbers are there, but I think it is more vulnerable now, "he answers when the question arises.

"Before, he was unstoppable and now he does not compete as often, and that may reduce his competitiveness", he continues. "The players already know that it is not the Serena of before and at the end they are also passing the years, and that physically counts … But to a game you never know. It's not like before, but you always have to be careful with it. I've always thought that I could hurt her, because I can rampage with her one on one. There is a lot of difference with the serve and the remains, but once we get to play the point the difference is not that great, "he says.

"I've never done more than three games, I think, but this is a different surface and with it (37 years old) I've never played here," says Suarez, who beat Williams would automatically become the Spanish with better ranking, ahead of Garbiñe Muguruza. "We do not compete between us," he remarks. "But hey, the fact that I can say you are up can be positive. It's something I've already experienced, but the important thing is to add up every week, "he says.