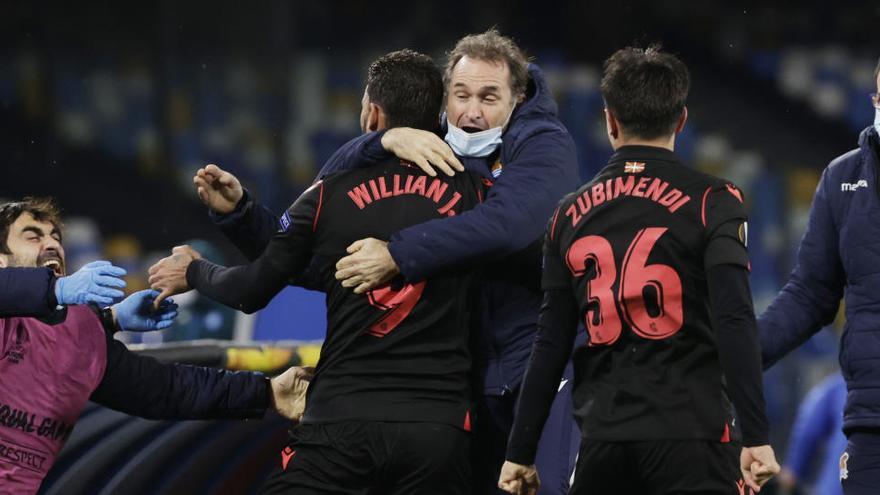 The Real society, at the premiere of Diego Armando Maradona stadium Neapolitan, managed to overcome the casualties of David Silva and Mikel Oyarzabal and drew 1-1 this Thursday against Naples, which gave him the ticket for the round of 32 of the Europa League as second classified in group F.

Eliminated until added time of the restart, when they lost in Naples and AZ Alkmaar tied in Rijeka, the story changed for Real Sociedad thanks to a great goal from Brazilian Willian José, who tied an initial goal signed by Pole Piotr Zielinski.

Seconds after the Brazilian forward celebrated his first goal in this Europa League, the news of the Rijeka advantage against AZ, which made the dream of Imanol Alguacil’s team come true of returning to the sixteenth, after the last participation, in 2018.

Without David Silva and Oyarzabal, the league’s top gunner with seven goals, Alguacil opted for Belgian Adnan Januzaj, Cristian Portu and Willian José, who scared Napoli with an aggressive start, but lacking punch, which significantly complicated his work.

Willian José was able to break the equality in the 13th with a powerful shot stopped by the Colombian goalkeeper David Ospina while Portu forgave in the 19th an unbeatable opportunity to overtake his team. A ruling that took its toll on the Royal Society, as it woke up Naples.

Gattuso’s team, which had won the last two league games 4-0, against Roma and Crotone, knew how to compact when they had to suffer and, after a warning from French Tiemoue Bakayoko, took the lead in 35 thanks to a great goal de Zielinski, absent at the Reale Arena crossing due to coronavirus.

In an action originating from a corner kick, the Polish international picked up a rebound, controlled and released a crossed right hand that entered the squad and glared at Remiro.

Zielinski’s goal sent the two teams to the dressing rooms with the 1-0 score in the Maradona light, a result that classified Napoli as first and eliminated Real Sociedad, AZ was drawing 0-0 against Rijeka.

The ball possession of the Alguacil box increased vertically at the restart, but with few real dangers in Ospina’s goal area, which convinced the coach to give way to Swede Alexander Isak to give more offensive weight and look for a goal that would be worth the classification, considered the tie that remained in Rijeka-AZ.

The nervousness increased in the Real and Naples got to have an excellent opportunity to sentence the crossing in 90, but he forgave her with a central shot from Spanish Fabián Ruiz.

The Alguacil team was saved and in the following action a defensive failure of the Algerian Faouzi Ghoulam was picked up by Willian José, who unleashed all his rage with a right leg volley that struck down Ospinto.

It was 1-1 that classified Real Sociedad as second in the group for the round of 32. It’s the fifth straight draw for Sheriff’s men, a result that this time tastes sweeter.

Incidents: Match corresponding to the sixth and last day of group F of the Europa League played at the Diego Armando Maradona stadium in Naples behind closed doors.

Thebes: “The clandestine Super League is dead and evicted”