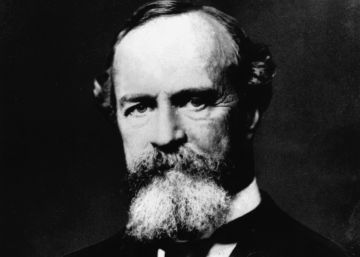 Irish immigrant and solemnly poor, the grandfather of William James He arrived on Ellis Island without shoes, at a time when only tuberculosis patients, anarchists, polygamists, and criminals were deported. As a boy, he was employed in a haberdashery in Albany. He invested his meager earnings and ended up buying the store. In time he became the foremost banker in the state of New York. He was married three times and had 13 children. The philosopher's father was a loose cannon. Romantic, night owl and drinker, he dedicated himself to the only profession that allows those inclinations: journalism. His life as a craze earned him disinheritance. He fought for a decade and finally got his share of the inheritance. He invested it in the education of his children, including Henry, the writer, William, the philosopher, and Alice, one of the first American diarists. Henry became the first American writer to be studied at Oxford and William the founder of psychology and pragmatism, a delightful school of thought whose name does not do it justice. A method to appease the endless metaphysical disputes. It is the world one or many? Free or determined? Material or spiritual? James suggests investigating each possibility based on its life consequences. If there are no practical differences, then the alternatives mean the same thing and any dispute is futile.

James came to philosophy after abandoning his vocation as a painter and assuming the scientific training his father wanted. He graduated in medicine but never practiced the profession. It was not a laboratory animal, in fact, it felt incompatible with the test tube. He preferred experiments on oneself. Psychology, then an eccentricity (which he helped found), allowed him to escape from physiology and anatomy, of which he was a full professor at Harvard. It was too intense to get along with the positivist lukewarmness and too awake for materialism, "which suggests an infinite insomniac factory" (Borges). Read to Schopenhauer, Spencer and Goethe, who taught him not to overestimate the scientific method (a way of satisfying the wishes of a community) and refused to reduce emotional and aesthetic experiences to mechanical models, epiphenomena, or illusions created behind the scenes. The rhetoric of the elemental (explaining the elevated by the inferior) seemed vain and prudish, a vital neglect, a surrender to the adventure of experience.

As a student he participated in a biological expedition through the Amazon. At that time he considered cabinet naturalists to be infamous types. I would think the same after the systematic philosophers, who enclosed the whole in adjectives and categories, distanced from living and numinous experience. I would rather do field work or listen to the account of unusual experiences, rather than dissect the metaphysical monster. He sarcastically said that if religion was a neurosis, atheism could be a liver dysfunction. He had inherited from his father his distrust of positivism and his mania for ignoring absent and unquantifiable aspects of the experience. The life of the mind for James was based on how we accept the universe, if we do it reluctantly and partially, or wholeheartedly and together, if we consider life as a fable or a nightmare. That sensitivity to invisible and dark forces had its reason for being. The opaque cloud of depression visited him frequently. To the point that in his youth he had to discipline himself to "force himself to live" and not break inside. He believed in many things that philosophers do not usually believe, in what are popularly called ghosts or spirits and Buddhists call the "subtle body".

After reading a pamphlet titled Anesthetic Revelation and the Essence of Philosophy, James underwent nitrous oxide inhalation. An experience that he recommends to anyone who wants to see for himself the strengths and weaknesses of Hegel's philosophy. He found that the gas slowed down mental activity and suspended the analytical function of intelligence, causing expanded states of consciousness, euphoria and hallucinations. James published a detailed scientific report, highlighting a genuine "metaphysical revelation" during which he was able to watch simultaneously the subtle ties that bind things together. The impossibility of expressing the torrential sense of identification of the opposites (the tragic and the comic, life and death, good and evil) was revealed when he read what he had written down during a trance, a set of disconnected phrases. The memory of an immense reconciliation remained, the same one that characterizes certain states of drunkenness, and the suspicion that "Hegelianism was true after all."

Each opposition vanished into a higher unity on which it was based and the so-called contradictions belonged to the same level. It was as if the world's antagonisms dissolved and surrendered in successive units. The ego and its objects, mine and yours became one, and one of the species, the noblest and the best, assimilates and absorbs its opposite. Another sensation was the certainty that we live in an infinite universe where the effort of the finite is negligible. We sail into infinity and that is our destiny, inescapable and dizzying. It was the most powerful emotion he had ever experienced and concluded, in line with the upaniṣad, that normal consciousness was only a particular type of consciousness. “Above it, separated by a transparent screen, there are completely different potential forms of consciousness. We can go through life without suspecting its existence, but if we apply the required stimulus, with a simple touch, types of mentality that probably have their field of application and adaptation appear with clarity ”. And it seems to be talking about angels, daemons or bodhisattvas when he affirms that "no description of the universe can be definitive if it neglects those other forms of consciousness." The Harvard professor confesses that all this sounds dark, but he is unable to evade the authority of that experience.

Anyone who has tried hashish or lysergic acid knows that these states, systematized by yoga and shamanic traditions, allow one to glimpse (be moved and perceive) a mystical genius in reality. Bergson, with whom he was friends, had suggested that nothing prevents the thinker from taking to the end the idea that mysticism suggests: a universe that would be nothing more than the visible and tangible aspect of love and the need to love ”. He was fascinated by Bergson's idea of ​​a creative and loving energy that was capable of extracting beings worthy of being loved, thus being able to sow worlds. With them it is possible to maintain a magnetic relationship, since the vital impulse and matter are complementary. The vital current through matter travels countless paths and can become stagnant in the wells of depression. Finally, it finds beings destined to love and be loved, capable of recognizing that same creative energy as love.

James dared to be a heretic of philosophy, postulating a multiverse of particular facts where rationality existed only in pieces and not in blocks. He had the sagacity to note that British philosophy had fallen (via Hume) into the hands of Kant (who believed that space and time were prior to mind and perception), and turned a blind eye to that sinister turn. He stayed true to Berkeley's radical empiricism. As Borges recalled, he succeeded in making his quiet hypotheses no less attractive than the most fantastic inventions of reason. A philosophy contingent on life, which does not intend to reduce the diversity and richness of the world, but simply to accompany it, to grow with it.

In his study of the varieties of religious experience, James set out to undo the opposition between science and spirituality. Both would become complementary aspects of the same reality. In this way we would not find ourselves doomed to live in a world devoid of inner content. In the time of James, mechanistic science was beginning to be overcome, especially in the realm of physics. James was able to contemplate these advances but noted that the positivist vision remained deeply ingrained in educated people. Descartes was still alive in the collective consciousness, especially in the insistence on considering extension as something inert (and outside of thought). James preferred the pampsychist vision (which is now back in fashion), it seemed to him a better way of understanding nature and trying to imitate it, instead of this blind drive that tries to subdue it and make the most of it. He preferred the view that everything living is interconnected. One part of a mechanism can be fixed without damaging the rest, but the same is not the case with living things, because each of its parts corresponds to an interactive totality. James recognized the threats of Cartesian epistemology, which we see today in the form of dramatic warnings from the planet.

William James was an admirable writer who left us with a series of unforgettable maxims. We are not biological puppets and our ideals and values ​​are not the result of blind or inert physiology. As a scientist, he warned that nothingness, chance and necessity are poor elements to support the casuistry of the scientific story, a narrow and dark panorama. A better story is needed, a subtle complement of the spirit, involving the imagination and feeling, as Goethe had rehearsed. Today more than ever, James' proposals and the need to reconcile both worlds, to renew our aging official scientific culture, are updated. Claiming intuition never hurts. And not because it takes us anywhere, but because it starts everywhere.