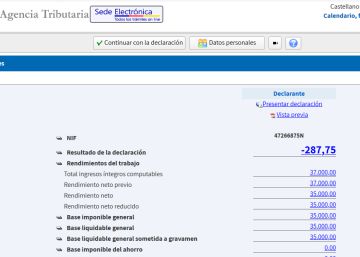 Since last week, taxpayers can comply with the Treasury, a process that although this year is altered by confinement due to Covid-19, it has not modified its deadlines. In fact, given that the vast majority of returns are completed electronically, some taxpayers have accelerated the filing in order to receive a refund in the event of a negative return.

The vast majority of statements are to be returned, since the Treasury has withheld more money than is due to be paid. Although the treasury usually adjusts withholdings at the expected effective rate, it does not usually compute deductions and other tax benefits. So tax advisers advise always review the declaration. In some cases, although the taxpayer has no obligation to file a declaration, they can still benefit from it.

How do you know if the statement goes out to pay or return?

You must use the Renta Web system of the Tax Agency, both in your internet version as for mobile applications (available for Android and to iOS. The draft declaration, which includes a preliminary result of it, has been available to taxpayers since April 1. To access the draft you need identify by any of the mechanisms enabled: Cl @ ve PIN, reference number or digital certificate.

Can I confirm the draft directly if I return it?

Yes. In fact it can be done directly from the mobile phone, without the need to provide additional documentation or check the data. It is also possible to confirm the draft through the Renta Web system via the Internet. In any case, it should be remembered that the draft is for guidance: even if the data is provided by the Tax agency, the responsibility for errors or omissions in these lies with the taxpayer.

I have no obligation to file, if I consult the draft am I required to file?

No. Consulting the draft does not affect tax obligations. That is why it is recommended that anyone who has entered rents review their situation. If the preliminary result is favorable to the declarant, a declaration can be presented, but if the result is payable, it can be ignored. This year, taxpayers who enter for income from work more than 22,000 euros from a single payer or more than 14,000 from several (they do not count if the second and others add up to less than 1,500) are required to file a return. Also taxpayers who, even if they do not work, obtain 1,600 euros of capital income or 1,000 euros of imputed income (the result of owned homes).

What happens if some data is not correct or missing?

If some information is not correct, the taxpayer has the duty to correct it and present, if required, the return. Confirming a draft with inaccurate data, even if you have no obligation to declare, may lead to a review by the Treasury. The data in the draft is generally correct and covers most of the user’s income. They are the so-called “black data”: payroll and withholding certificates, bank accounts, mortgages … The so-called “blue data” are those about which the Treasury has extensive, but not complete, information, such as a home owned. Finally there are the red data, about which the Treasury has no information of any kind (prizes, estate sales …). All of them must be recorded.

What if he won’t let me confirm the draft?

This happens with the so-called blue data: the Treasury knows that the taxpayer must provide more information but does not know it in detail. In these cases the Hacienda’s mobile application does not allow confirming or modifying the draft; this procedure must be carried out through RentaWeb.

If I have to return, when do I receive the money?

The Treasury has six months to pay, counting from the last business day to file the return. Like this year the campaign ends on June 30The last day to collect is December 30. However, it is known that the treasury is conducting verifications, normally it is charged before, and in fact some of the taxpayers who have taken advantage of the confinement to make the declaration have already received the return. Beyond the six-month term, the Treasury would pay default interest.

If I have to pay, can I delay the payments?

There is the possibility of splitting the payments, although the Treasury establishes the conditions. 60% of the couta to enter must be paid at the time of filing the return, and the remaining 40% must be paid no later than November 5, 2019.

What if I was wrong?

In that case, you must either file a supplementary statement or request a statement. In any case, for taxpayer purposes the mechanism is similar, and it is also carried out through the Tax Agency portal. In any case, the taxpayer must select one of the two options, depending on the result of the correction.

Tags: be, do, eraser, give back, go out, keys, obligate, pay, power, rent, return, should, statement, taxpayer, to receive