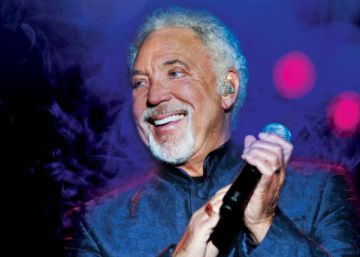 Wilco, Tom jones, Dido, Cat Power, Rufus Wainwright or Belle and Sebastian will be some of the stars that will be part of the programming of the fifth edition of the cycle Botanical Nights, which from June 17 to July 29 will fill the capital’s Complutense University with music.

As has been revealed this Thursday at a press conference, they will be joined by Pat Metheny, Of Monster And Men, Crowded House, Jessie J, Herbie Hancock, Agnes Obel, Víctor Manuel, Los Secretos, Estrella Morente in double concert with his brother Kiki , Tomatito, Diego El Cigala and Andrés Suárez, among others.

The Royal Botanical Garden of the University City will repeat as the headquarters of this fifth edition, which will have the difficult role of matching the success of its last call, with more than 90,000 attendees in 34 concerts, many with all the capacity exhausted.

To try, the one that its organizers have come to proclaim as “second musical event of Madrid brand” will have, in the absence of confirming more artists, with at least 35 days of performances, of which 16 will be double programming and will offer more music to Charge of women than ever.

This will be the beginning of June 17 reserved for Estrella Morente, who will share the stage with his younger brother, Kiki, a day before the landing of the British Dido, one of the most recognizable pop voices, which will be his first Visit to Spain and the capital in 16 years.

Even more legendary, Pat Metheny will wrap the gardens with that jazz backed by 20 Grammy Awards on June 20. More jazz will serve the combined Patax on the 21st as the opening of the Italian Zucchero, while Víctor Manuel and Andrés Suárez will put Spanish verse on the nights of 24 and 25, respectively.

Wilco, which will probably be the great sensation of this edition, return to Botanic Nights on the 26th to present Ode to Joy (2019), as the Italian LP also repeats on the 30th, after the passage of Los Secretos and El Twanguero on the 27th.

The month of July opens in a big way with Tom Jones, a living history of music, who has asked for a clue with a standing audience “and will have it,” said those responsible for Botanical Nights.

His fierce will be followed by a series of concerts of taste and sensitivity: the 2, the alternative folk of the Icelandic Of Monster And Men, perfect set for the 4 act the pioneers of sound indie Belle And Sebastian with surprise, the concert that same evening of the Canadian Beth Orton in his first performance in Madrid.

Throughout this line, the bis in Nights of the Botanist of Rufus Wainwright also enters, this time with a band, on day 5. He will take over the magnetic Cat Power on 6 and a double height program with the oneiric bankruptcies of Agnes Obel and the melodramatic acidity of John Grant, both on 7.

Jazz returns on July 8 with Cècile McLorin Salvant, crowned by the Grammy as the new great voice of the genre. After her, on the 9th and after years of a break, the whole story of Crowded House, authors of some of the most contagious melodies of all time.

Tomatito (in the company of Duquende, Israel Fernández and Antonio Reyes) lands on 10, followed by Diego “El Cigala”, who on 11 will present his new album dedicated to Mexico with an emerging star from that country, Flor Amargo.

I could not miss at least one appointment with electronics. The French star Woodkid will put it as a great star of style with his stunning staging on 12.

Other artists who will go through Botanic Nights will be George Thorogood & The Destroyers and Vintage Trouble (day 13), Carlinhos Brown and Cimafunk (14), Imelda May and Nikki Hill (16), Zenet and Javier Ruibal (17), Vicente García and Tony Succar (19), Yann Tiersen (20) and British commercial pop star Jessie J (21) and Little Dragon and The Cinematic Orchestra (day 22).

With an ear on Africa, Madrid can enjoy the 23rd Senegalese star Youssou N’Dour on a double program with another very unusual proposal in the capital such as Cymande, which will be followed by Asaf Avidan and Mayra Andrade on the 24th.

In the closing days you can see Quique González, accompanied by Egon Soda (day 25), but especially the combination in a single evening of Kiko Veneno with Graham Nash, who was a member of the mythical Crosby, Stills , Nash & Young (day 26).

The veteran Herbie Hancock (27) and the Oscar D’León sauce and the Peruvian folk of the veteran Eva Ayllón (28) will constitute the prelude to the definitive brooch, on the 29th, with the recovery of Gipsy Kings (“the authentic ones”, they have stressed since Botanic Nights) and La Barbería del Sur on their return to the stage.

“I am not an acting official”