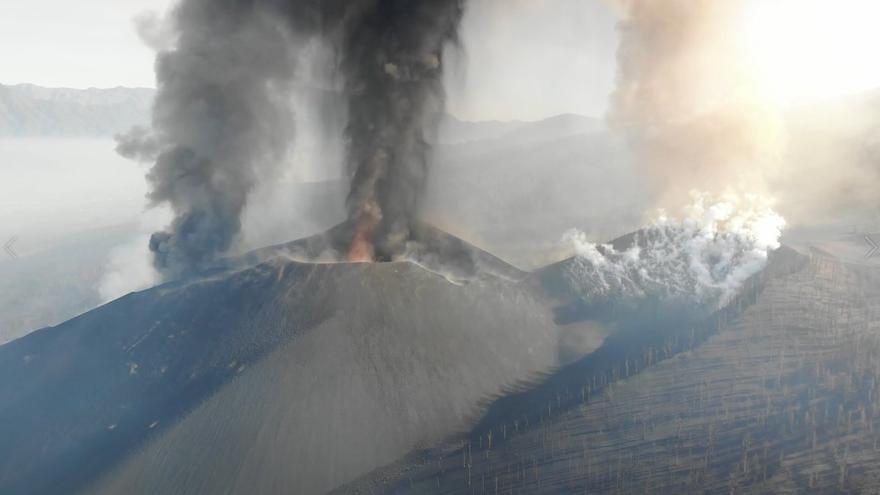 It cannot yet be said that the La Palma volcano is fading. It is true that the levels of sulfur dioxide (SO2) fell during some days and that there is “a certain seismic tranquility in depth”, explains the researcher from the CSIC Vicente Soler. But, for the moment, “no one dares to say that this is coming to an end.” After 40 days of eruption, he recognizes that there is a desire that the hardest part, the one that has affected La Palma trees, cease. “It is true that we have already been 40 days and that there is a desire for a reality. To see that this comes to an end. But for example, yesterday there was a decrease in the seismic tremor, that today is already recovering. Now it’s going up. “

Varying sulfur dioxide levels, even very low levels, is not an unequivocal sign of an impending power outage. “The volcano gives a little diffuse signals, the sulfur dioxide oscillates, but it does not descend clearly. In the latest INVOLCAN report this meter continues to exceed 20,000 tons per day. [un nivel considerado bajo podría estar en torno a 100]. The seismicity also oscillates, in fact since the earthquake that occurred yesterday at around 7:30 am, there is a certain seismic tranquility in depth, more than 30 kilometers away. “However, Soler considers that all this, all the variations in the levels, they are still passing signs “within a time series that has many ups and downs.”

Remember what happened on September 27 when the tremor dropped to zero, but was reactivated seven hours later. “There was no lava emission and the tremor was at zero. That would be like a flat encephalogram for a volcano.”

One of the estimates, when comparing this volcano with that of the island of Fogo, in Cape Verde, explains Soler, is that once the SO2 emission subsides, the eruption could continue for a week “with very low intensity.” The end of the underwater volcano of El Hierro was confirmed with the end of the tremor. “There are parameters that occur a few days before and others that practically represent the moment of the end”, distinguishes the scientist.

“The end of the eruption is associated with the tremor and the cessation of effusive activity that can be detected with the naked eye. The tremor has to stop, but the intense fumarole activity, strombolian activity and the emission of lava must also stop”, Add.

“A certain deformation will persist. There will be a much more moderate and dispersed readjustment seismicity,” Soler advances. In El Hierro, he gives as an example, ten years later there was still scattered seismicity. “The lavas will cool quickly, in a matter of a month. A small diffuse emission of CO2 will continue and the temperature will persist in some points for a long time,” he adds. Some gas exit points from the Teneguía “had a temperature of 400 degrees” a decade later. According to the scientist, there are volcanoes that have an “almost instantaneous” end and there are others in which there are remains “close to the surface.” Those are the two scenarios that are handled for the later moments.

In any case, the monitoring of the Cumbre Vieja volcano will last for years, just as it happens in El Hierro.

What is possible is that a new phase is beginning. “Seismicity is decreasing and hopefully it will continue. It would be in some way a sign that a calmer phase or the end is beginning, “says Soler. But yesterday [miércoles] There were two earthquakes at 7:30 in the morning, separated by three seconds, of 4.8 and 5. “Therefore, say 30 hours after the seismicity decreases … you have to wait a little bit because the seismic energy released as a whole it does not decrease if yesterday’s is computed. “

It is still expected that earthquakes of magnitude 5 or even higher, but not close to 6 will occur. “A statistically greater event is expected because it is not a calculation that has an origin related to the physics or chemistry of the phenomenon, it is a thing time series statistics “, explains the expert, who confirms that” a magnitude 6 is a lot for the Canary Islands area “.

Acid rain is out of the question. On the contrary, that it rains can be positive, according to the scientist. “I think that the rain favors the partial cleaning of the finest particles in the atmosphere.” “There is a situation and that is that the SO2 seems to rise strongly up to 3,000 meters, so much of the SO2 is dragged in a cloud off the island and does not have a direct impact on those of us who are here.”

When the volcano erupted, it was unknown what its eruptive capacity would be. There were no such predictions, although the previous references to Teneguía, considered “a much more moderate volcano” than that of Cumbre Vieja, did. “The damage on the ground was not expected to be so great, because the lava has only reached the sea once“Soler insists. The lava field that has been created is three kilometers wide due to its high viscosity.” When it comes out it is a very fluid material, but when it moves away from the eruptive center and cools a little it gains in viscosity, the magma it becomes doughy, it is difficult for him to move forward in front, the streams grow back, expand horizontally and do not reach the sea. This behavior was not expected, which is unfortunately the one that is causing the most problems. “

In general, La Palma trees want the volcano to go out. “The desire for the end to come is born, first of all, from the affection to society. The sooner it ends, the better”, the researcher comments. On a professional level, the most important thing has been to achieve the registry in which they have been working for a month and a half because “it will allow an analysis like we have never had before as a country.” There is already tremendous documentation about El Hierro, but that of the La Palma volcano will be much more complete because observations have been made on the surface with state-of-the-art technology.

Tags: are, diffuse, no, Palm, signals, sure, turning off, volcano