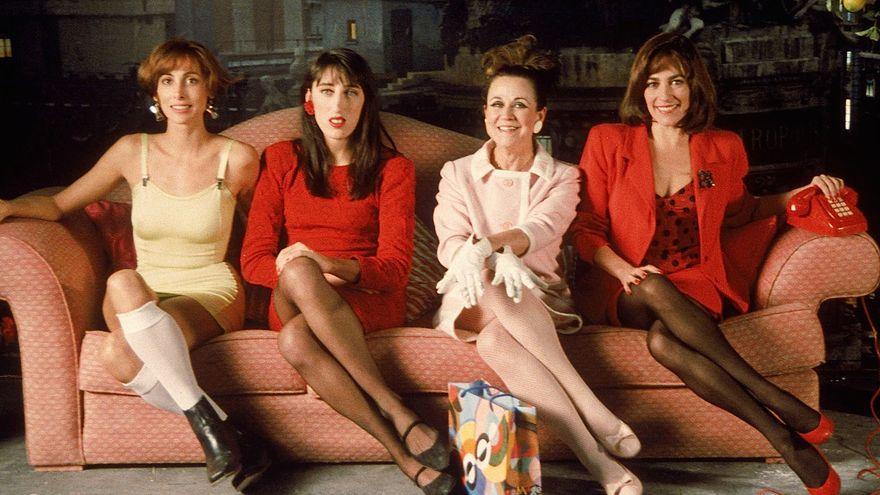 This chronicle begins with an intuition: something (bad) happens when they call us intense. Especially when men tell us, especially when so many women report discomfort when being questioned with that word. It is a diffuse discomfort but at the same time closely linked to several concepts that all the women consulted mention: asking, demanding something, pointing out, getting angry, showing emotions. It seems pertinent to ask if behind that word something elusive - it does not have a priori no negative connotation - a story has been constructed that serves to make us feel bad, to question us or to show us where the limits are.

I ask more women. "Men have told me when I have talked about how I feel in certain situations and it does not coincide with theirs. When I have expressed my disagreement with a situation that has changed. It is not about asking for explanations, which could also be done, but about knowing And of course, you feel out of a game where it seems that the valid rules are those that seem to him at all times, "says Charo. Amparo says she heard that word when she started talking about "feelings and impressions", also in bed, in heterosexual relationships. "They called me at the beginning of a relationship, I think it was to show my feelings. I felt weird," adds Y. "For being kind and not passing from a man. You show interest and a minimum of affection and you are intense", Carmen complains.

I speak with American writer and journalist Rebecca Traister, author of the essay Good and angry. The revolutionary power of women's anger (Captain Swing). I tell him my impressions, he nods on the other side of the video call. "What we now call 'intense' means difficult, it means that this woman behaves in some way that is not expected of her. It can be someone who shows a lot of personality, who makes demands, who shows strong opinions, who is vehement. .. The characteristics traditionally assigned and appreciated in femininity are different: women have to be easy to handle, they have to be less demanding, less opinionated, less talkative, "she says. As women, remember, we are not as legitimized as men to ask for what we want - more money, more authority, more decision-making power, more respect, better sex, better treatment in a relationship. Intense tour, therefore, on the idea of ​​asking, of showing, of claiming.

"Women are not supposed to be motivated by their own desires, ideas or needs. So 'intense' has to do with asking in any context: professional, personal, family, romantic, sexual ... It's a 'she wants too much of me or too much of the situation 'when it is assumed that our role is not to ask or demand, "he reflects. Indeed, the women with whom I speak report having heard that word in different contexts, although there are two that are constantly repeated: affective sexual relationships with men and work. It is not surprising, Traister tells me, after all, these are two of the areas in which we consume the most time and energy, "and they are areas that are still controlled especially by men", so the interventions of women are especially successful " disruptive ".

"It is a clever strategy because the word is not per se negative, I use it a lot as a good thing, to refer to someone's level of connection, passion, curiosity, or commitment. But it has undoubtedly become a sexist version less obvious than other words to say that a woman is 'too much'. Hysterical is a word closely linked to the body of women, it has a very marked gender component, it is easier to understand as something sexist. Intensa has a more elusive meaning, it can refer to the emotional or to be very demanding professionally, to be ambitious, very analytical, very audacious ... ", reflects Traister.

Alejandra says that they have called her intense in a sentimental context, "in conflicts and when claiming emotional responsibility." "I felt very weak," he adds. "In a couple context, for wanting to clarify things between the two and express what he felt. It questioned me. I came to not recognize myself, I doubted myself, I felt insecure and blocked, "says Laura. Carmen received the 'intense' when she spoke with a boy she was seeing:" I was longing to meet and I wanted to know what moved him To do it".

So, they no longer tell us hysterical, or at least it is worse than before, but we are intense. The psychologist and author of Therapeutic Feminism, María Fornet, shares that it is a qualifier heard by many women, especially in affective contexts. "That word and all its correlatives - crazy, hysterical - are similar expressions that describe an emotional experience that man perceives as overwhelmed, threatening or excessive," he says. The socialization of women revolves around emotionality, but not that of men. Putting a label on these behaviors is not innocent, it has consequences.

"Once we say how we feel or are assertive we come across that word, and the person who uses it invalidates our experience. There is patriarchy there, there is a very evident machismo. I think it happens a lot in heterosexual couple relationships, when men do not understand, or want to disassociate themselves, or take responsibility for their actions. When the response to something the man has done provokes that emotionality, then instead of asking for forgiveness or taking a step back, his response is to invalidate and blame " , Explain.

The feminist psychologist Ianire Estébanez believes that words are changing, but what is cataloged with them not so much: "In all cases what is being pointed out is the emotional, especially in women who set limits or who complain about a problem , women who show anger or make explicit something that is happening. It is a way of reducing our criteria, it is as if they told us that what we are saying is subjective, while whoever tells us speaks from a supposed objectivity ". The effect is a feeling of invalidation, he repeats, a penalization of the emotional, the idea that what we feel doesn't really matter that much. "It is a way of doubting ourselves, of feeling that we do not have the criteria to say what is important to us," says Estébanez.

The reaction, continues María Fornet, whether in personal or work settings, is to feel that our reaction is inappropriate. "The consequence is shame and guilt and those are two great socializing weapons. Your immediate reaction is to come inside, make yourself small, not continue down that path. It is an easy way to silence someone, especially when that person has listened many other times that discourse and it is easy to internalize it and assume it as true, "he says. Because 'intense' is a word that tends to repeat itself in our lives and that, although it can sometimes be emitted and received with a positive meaning, most of the time we perceive it with a clear pejorative connotation.

"They have called me in work contexts, friendships and in rolls. I feel questioned and it stops me from saying what I think or feel," says Julia. "They told me at an annual salary forecast meeting, I was the head of the department, he was the general manager. I felt powerless," says C., who prefers not to give his name. For his part, E. remembers that it was in a couple's discussion: "I felt that they told me that I am wrong, as defective". María focuses on her professional context, where she says that, for not being quiet and responding, she was described as emotional and intense. "I never raised my voice, I was judged for being forceful and vehement."

Returning to the conversation with Rebecca Traister, the writer highlights another of the implications, not so explicit, about what these expressions imply. "It implies not being attractive. The characterization of angry women has always been linked to ugliness. Women are supposed to be attractive to men, it is one of the ways in which society continues to condition women, and being marked as intense is a way of telling yourself that you are less desirable, that you have less chance of being liked in all areas, of course in a romantic and sexual sphere, but also in others, such as work. " It's a threat that looms over us: if you're intense I'm going to stop finding you attractive, you're not going to like it, you're not going to be so cool.

If we challenge the limits of that 'intensity' - no one knows exactly where they are - we jeopardize our appeal, but we also run the risk of conforming. In this sense, Ianire Estébanez recalls that this permanent disincentive that women feel about speaking, pointing, getting angry or setting limits has a very perverse effect: stop asking. "We end up keeping what there is. We are used to adapting to those who leave us."

The phrase is so revealing and at the same time so depressing that it is worth ending it. The patriarchal threat is that we will be left alone, recalls María Florencia Freijo in Alone, still accompanied. The reality, recalls Catalina Ruiz Navarro in Fighting women meet, is that feminism gives us friends, new networks, affections. And I add: tools to understand, to transcend the personal, to free ourselves a little more and find ourselves with the intense life that we want to live.