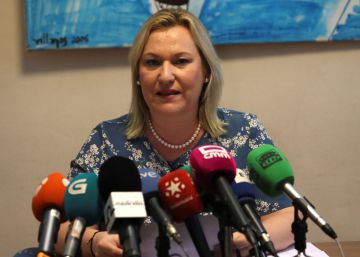 It's like looking for a needle in a haystack. But the beginnings are simple. A DNA kit is requested online. Arrive home The sample is taken and sent by mail to a laboratory in the United States. This was done by Inés Madrigal, the woman who brought the first case of stolen babies in Spain to trial. And he managed to find his biological family after 32 years of searching. I had also tried it here, but it did not get results. The difference lies in the technique: in the number and type of genetic markers that are analyzed. There they can detect relatives up to the fourth degree, something impossible with the method used in Spain.

"I have four brothers whom I have already met, who are wonderful people," said Madrigal on Thursday at the press conference in which he revealed that now, at last, he knows his origins. Her biological mother gave her up for adoption and her brothers had also sought her out. "One of them had even taken his DNA profile to one of the databases [private] with which we work with the associations of stolen babies in this country, that is dramatic, my profile and that of one of my mother's brothers was in a Spanish database that, however, has not detected the kinship ", has criticized.

"It's been possible thanks to an American DNA bank. Much more advanced than here. Not even the bank of the National Institute of Toxicology and Forensic Sciences would have served so that my brother and I would have met. However, in this American private company not only detect brothers and fathers, is that they put me in contact with a second cousin. Then it was simply a matter of pulling the thread, "said Madrigal.

Around a hundred people who suspect that they may have been victims of irregular adoption or theft of babies in Spain have turned to these private international DNA banks to try to find answers, according to Pedro. Rye, from the association Without Biological Identity, who looks for a sister and has studied in depth the method they use. "With Ines I already know nine cases in which they have managed to locate their family, if you find a family member, even if it is far away, you can solve the puzzle," he says. "We want the more people to participate, the better."

This is the success of companies such as 23andMe and MyHeritage, the two best-known private international banks in Spain. Madrigal resorted to the first of them, where the process costs little more than 100 euros. The number of Spaniards who have turned to these companies is unknown, which allows us to find out the ethnic origins or make family trees. Only in MyHeritage in Spain have 1.5 million users, according to sources of the company that did not specify the number of genetic profiles. The more samples, the more chance of matches.

"In Spain we analyze STR markers and there, SNP, but the fundamental difference is the number of 20 markers that are studied here to hundreds of thousands there," he explains. Antonio Alonso, director of the National Institute of Toxicology and Forensic Sciences, which manages the public file of DNA profiles, emerged in 2012. After Madrigal located his brothers, in the institute they carried out complementary analyzes and confirmed the relationship.

In Spain, the data comparison allows connecting parents with children or, at best, siblings. But the institute itself, which depends on the Ministry of Justice, warned in 2014 in a circular of "the low reliability that has the search of genetic compatibilities between possible biological brothers " in the database. The note warned of "the incidence of false negatives and false positives," which makes "a reliable search impracticable when only one brother is available." For this reason, they called to inform families of this difficulty and to recommend, in cases where a brother seeks a possible victim of an irregular adoption, obtaining samples from the alleged parents and, in case this is impossible, the remission of the profiles of two or more brothers of father and mother.

Spanish private laboratories, like the one used by Madrigal and his brother, use the same technique as the institute, so detecting siblings is very difficult. Even more so if it is, as in the case of Madrigal, a half brother. They share a mother, but not a father. "Here there was no possibility of detecting a half brother with the analyzes that are carried out," says Alonso. He points out that in the future "there will be a technological evolution in the laboratories, which is already there", and that at the institute they have just "finished a massive sequencing project", but that analyzing so many markers throughout the entire genome entails risks from a bioethical or legal point of view. "They can give us information about certain diseases, for example, it is very important to pay attention to data protection," he continues.

Sources of MyHeritage insist that they are the "only company" that "does not share the data with third parties" for police or commercial purposes, although they do use them for internal or scientific investigations. Last year, for example, 23andMe reached an agreement with the pharmaceutical company GlaxoSmithKline.

Alonso calls to regulate this market. "Individuals who turn to these databases, which belong to private companies, have to know what their risks entail.The protection of the genetic information that you put there is in doubt, you do not know very well what is going to be done with it. I do not know what kind of informed consent they are signing and we know that they cede or sell data for other purposes, "he warns. Therefore, it offers the possibility of advising the users of these companies: "Help them in the evaluation of these studies and their reliability and make a complementary analysis in case there is compatibility".

“We will defend the rights of the basic scale: 56% of the workforce”