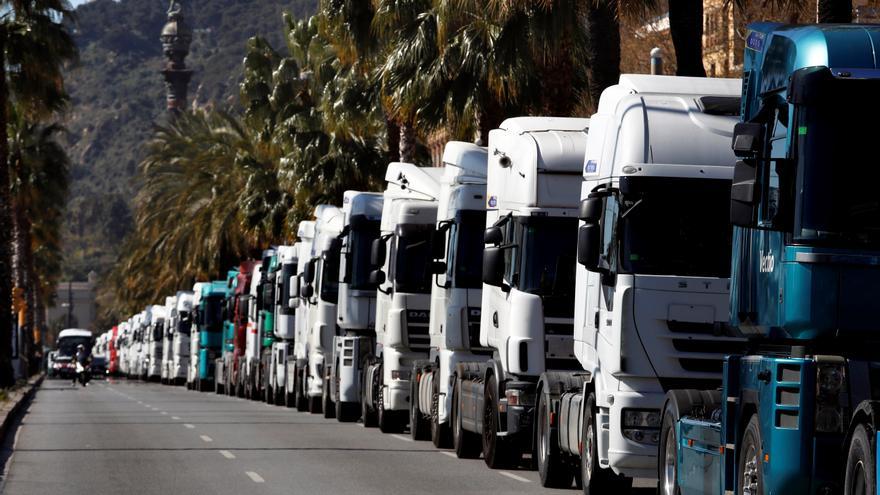 The road transport sector has called for work stoppages on key consumption dates, family parties, dinners and gifts. A mobilization that has been called by the main business associations in the sector. They are not only looking for the Executive to be sensitive to their situation, both due to the increase in fuel and the possible implementation of payment measures for use of the main roads. Also historical demands, such as prohibiting drivers from having to unload the goods they transport.

There is still more than a month left for this mobilization, which can leave supermarket shelves empty and plant roads with trucks on some of the busiest days of the year. We analyze the causes of this call.

It is a cessation of activity called by business associations. Specifically, by the Goods Department of the National Road Transport Committee. This committee is made up of the associations that bring together businessmen in the sector and that is the vehicle for dialogue, participation, with the different public administrations.

The strike does not have the backing of unions, such as the UGT and CCOO, which have distanced themselves from the call. They assure that it is not a workers’ strike and that it is the companies themselves that have caused some of the problems that the sector is going through, such as the precarious situation.

The organizers, on the other hand, argue that there is no difference between whether they convene one or the other. “It is not a matter of wage earners, what we propose is good for everyone,” Julio Villaescusa, president of Fenadismer, one of the associations that promotes mobilization, tells elDiario.es.

“When we talk about businessmen or truckers, it is the same. It is a sector with many small or medium-sized companies, people who have a truck or five. The average is 3.8. There is a predominance of small companies,” he indicates in the same sense José María Quijano, general secretary of the Spanish Confederation of Merchandise Transport (CETM).

And, between associations and unions, are the workers. Óscar Martín Brieva, a truck driver, assumes that it is the employer’s association that is calling for the mobilization and that it may be an “ordain” to be heard in the Ministry of Transport but, he emphasizes, the reality is that the economic situation is “strangling” the carriers.

There is more than a month left, which prompts a negotiation to be opened, positions to be approached or some kind of mediation is sought. In fact, Julio Villaescusa affirms that the sector “is not interested in a strike. What we want is to be taken into account” and to make its problems visible to society, which during the pandemic perceived road transport as an essential activity.

From the sector it is also reported that, on the dates set, most of the key merchandise for Christmas will have already been transported, except for certain fresh foods. A different question is the possible effect on the roads, if the roads are blocked.

The FESMC-UGT Road Sector focuses on the fact that the call, “curiously”, has been scheduled for a Monday, Tuesday and Wednesday. This union believes that these dates can be a “pantomime”, because the vehicles that make international transport of merchandise can work piecework the previous days, weekend included.

“We have decided to stop because circumstances are coming together. We have been trying for some years to reach an agreement with the Ministry to carry out an impulse plan, but there are no decisions, there are no measures on the table and the problems are growing and eternalizing”, argues José María Quijano, Secretary General of CETM.

There are four specific reasons: “the prohibition of drivers from loading and unloading trucks, the non-implementation of Eurovignette, mandatory application of the fuel cost review clause and the construction of safe rest areas for professionals” .

Regarding the cost of diesel, this has increased between 30% and 40% so far in 2021. Other measures, such as the Eurovignette -a subscription that allows heavy vehicles to circulate for a certain time-, the Commission The European Union has given a free pass to the States for its application and, for the moment, in Spain it does not apply.

Another issue is the future payment for use of the main roads, which the Government is studying and which it has promised to Brussels. The Minister of Transport, Mobility and Urban Agenda, Raquel Sánchez, has affirmed in recent weeks that, for its application, consensus will be sought both with the other political forces, as well as with the sector, which seems difficult to achieve.

The other two reasons for the strike are the construction of safe rest areas for truckers and the prohibition of unloading their goods. These two issues are demands that have been on the table for years and are a problem for all actors in the transport sector. Especially the issue of downloading. The complaint is that, after doing long hours on the road, on many occasions, truckers have to wait hours – without remuneration – until the companies for whom they transport unload the merchandise or, most of the time, do it themselves.

Some reasons that are also shared by new industry players such as Ontruck, a platform that connects truckers with companies that have to transport goods. “We agree with the demands of the sector”, assures Javier Escribano, its general director.

Instead, it highlights that other issues, such as payment terms, are not being claimed. He points out that the measure in Spain is payment in 90 days – in his case, he indicates, they pay carriers at 30 – and, on the other hand, that is not a problem in other European countries.

The organizers of the December strike also emphasize the need to dignify the profession. However, the salary issue is not among the main reasons for the call.

In fact, there is no single message as to what is the average salary of a road transport professional in Spain. The different sources consulted justify that different variables come into play, for example, if you work long distances, international or national transport, that there are very different agreements by territories or that there are differences if you are self-employed or salaried.

In this way, professionals in the sector point out that they can be charged from the minimum wage, plus bonuses depending on the work done. On the other hand, the associations of the sector indicate that you can receive between 1,500 and 2,500 euros per month, or above 3,000 euros in the case of international transport. Remunerations that, on the other hand, they recognize, are very far from the figures that were reached years ago and that did make the sector attractive for young generations.

Linked to the salary issue is the lack of truckers in Spain. The sources consulted perceive that it is not a problem in this country, as has been seen, for example, with what happened in the United Kingdom, with clear supply problems because Brexit has led to a lack of truckers from the European Union.

But drivers are also lacking on this side of the English Channel, and the same is true in the United States or Canada. Carriers are needed, even more so in a situation of breakdown of the logistics chain like the one that is being experienced in the final stretch of the year.

“The sector employs 600,000 direct jobs in Spain,” says José María Quijano, CETM secretary general, although he acknowledges that there may be more employees because there are companies, be they manufacturers or distribution groups, that have their own carriers. “We estimate that 15,000 drivers are needed, in three years.”

Time is there. Minister Raquel Sánchez assured this Thursday that “we have room to speak, as we have been doing”. “We are aware of the importance of the sector, the difficulties, the increase in fuel prices and the complicated relationship between carriers and shippers,” said the head of Transport and Mobility.

“We have been talking with the sector for some time, a few weeks ago the Secretary of Transportation met with them to propose measures to resolve their claims, some exceed the powers and are private relationships between shippers and carriers,” Sánchez deepened.

The Ministry sees itself as a “mediating agent” and whether the call is an ‘ordago’ of business associations or real demands, there are about five weeks ahead to see if negotiations and dialogue materialize or if the roads are filled with trucks , standing, on the eve of Christmas.