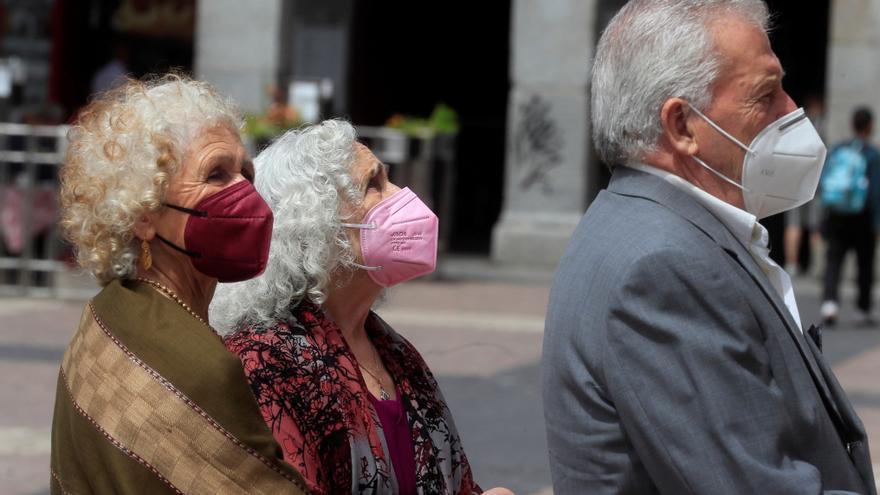 The end of outdoor masks is a written rule, but little supported in Spain. A week ago the new government regulations came into force that eliminates the obligation to take it outdoors whenever there is a safety distance. Some celebrated it at night with dances and songs, but the reality appeared a few hours later and in broad daylight: most of the people were still wearing it voluntarily.

This collective decision has come as a surprise after, in recent months, they have suggested more critical voices against the obligation at all costs than those who supported maintaining them. Even the European Center for Disease Prevention and Control (ECDC) recommended in April to “relax” the use of masks and the outdoor safety distance between people with the full guideline. Having 50% of the population immunized with at least one dose, the Ministry of Health and the autonomous communities reached a consensus on the date of the end of street masks. And they put it, but for many it is still early.

“We are experiencing the worst pandemic of the century since the 1918 flu. In Spain, it has meant an economic crisis and the biggest drop in life expectancy since the Civil War. We are not in a normal situation and it is very understandable that people want to take it easy, especially with measures such as the mask, which involve minimal cost and personal repercussions, ”says Usama Bilal, epidemiologist at Drexel University, in Philadelphia. “There are always people with excess of zeal, but better they than those who skip the rules to the bullfighting”, thinks Manuel Franco, professor of Public Health at the University of Alcalá and Johns Hopkins.

Franco acknowledges that the rule of the mask outdoors has been exaggerated, but that it helps to keep it in places where it is mandatory to wear it, especially indoors. “People knew that it was not necessary if they walked alone on the street, but they would wear it anyway and thanks to that we are understanding very well the nuances of this new rule,” he says. This has not happened in countries like the US, where the mask has been a political battlefield and its use has varied enormously between different states, as Usama Bilal subscribes: “Here a partisan use has been made because of Trump.”

Experts recall that in Spain it has not been an instrument of ideological division. The most that has happened is that a month ago some regional presidents they would like to be the first to remove it, such as Núñez Feijóo (Galicia), Emiliano García-Page (Castilla La-Mancha) or Isabel Díaz Ayuso (Madrid), and now the criticism of the Executive is for doing it “unilaterally”.

The risk that flew over a week ago was that these contradictory messages and the severity of the measure would cause a total rejection, even in contexts where it represents a safe and healthy habit. “The fear is that after this year we don’t even want to see it in painting”, the spokesman for the Spanish Society of Public Health SESPAS feared, Ildefonso Hernández. “People are wanting to live without a mask because it is the most visible symbol that the pandemic is over,” predicted Gema Escobar, director of the San Rafel-Nebrija University Center for Health Sciences. So why do we have it so ingrained?

“Because we have acquired the habit and doing the reverse process is much more difficult,” summarizes Xavier Escribano, professor at the Faculty of Humanities of the International University of Catalonia (UIC). In his opinion, “the continuous exposure to the gaze of others” wears out more than your own weariness towards the measure. “Exposing yourself continuously leads to fatigue to maintain your own image in a social world in which we suffer from a hypertrophy of the visual,” he argues. Thus, “the mask gives us protection in environments with which we are not interested in contacting”.

“The sociologist Richard Sennett says that the great contemporary metropolises are characterized by the fear of contact, with which the individual tends to withdraw, something that we saw before in public transport and that now has become more evident with masks”, explains the philosopher. What does not mean that “the mask has many drawbacks for free breathing and communication” and yet “its use has received recognition and praise.” At first glance, “it was clear who was complying with the rules and who was not,” emphasizes Manuel Franco. But that balance between good and bad is now more delicate.

Since last Friday, there have been many testimonies on social networks of people who have felt singled out for making a decision or the opposite. Those who carry it, justifying that they feel more protected that way or for sheer comfort and, those who do not, remembering that it is not a mandatory measure if there are no crowds on the street and the security meter and a half are respected.

“The person feels that they have a chance to exercise their own discretion after a year with so many restrictions,” justifies the professor of Humanities. In addition, having to use it inside shops, bars and transport, there is “an element of mental economy by which we do not care to wear it.” Finally, according to Escribano, “although there is no possibility of contagion outdoors, we have internalized that fear.” “It is not so easy to digest a message for a year and a half, and get rid of it from one day to the next,” he assumes.

For Bilal, that people have assimilated the mask so well in Spain “is a triumph of communication”, although he acknowledges that it may also be due to a certain confusion with the recommendations. “It is true that outdoors it does not have the same utility as indoors, but at first there was very little science about it and we learned as we went,” he recalls. In his opinion, the important message is that its use indoors is mandatory and outdoors is not. “The problem is to polarize it and start pointing,” he warns.

Manuel Franco puts it this way: “Before there were policemen on the balcony and now there are policemen with masks; unfortunately, it is part of the pandemic and inherent to the human being ”. It does not help that there are politicians who are recommending its use outdoors given the current increase in cases, as Ximo Puig has done in Valencia. “Taking it outdoors again is not going to stop community transmission, because we already know what kind of measures work,” says Franco regarding other tougher restrictions such as closures of interiors or nightlife. “It is very important that in low risk places it is optional and that people are not judged for wearing it or not,” defends Bilal.

“In human relations, conflict jumps at any moment, but I don’t think it will cause big problems”, Xavier Escribano confides. “It would be conflictive if, having an obligation, people decided not to take it. But everyone understands that we are in a period of transition and we are sympathetic to the fears that others may have. To qualify them, the authoritative voice of the scientific community and experts is very important ”, he concludes.