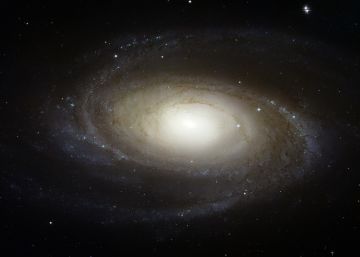 The question is very interesting and very relevant to the studies we do. Understanding why galaxies have the shape they have and how their structure is related to their formation processes and their evolution is a fundamental part of my research. It is important that you know that the fact that our galaxy is spiral is not a rarity, there are many that have a very similar shape. In fact, most galaxies are spirals. Properties such as its mass, its environment or the age of the universe influence that number is greater or lesser. We classify galaxies into two types: elliptical and spiral. When the universe was younger, the fraction of spiral galaxies was much larger than now that the universe is older since the galaxies are becoming elliptical by internal processes that we call secular. Also, in general, the smaller the galaxies, the more likely they are to be spirals rather than elliptical.

To understand why they have this shape, we must know that a galaxy is composed of stars, clouds of gas and dust and dark matter. We can consider this composition as a fluid, that is, galaxies behave like a fluid. If we have particles with an initial rotation speed and a well of gravitational potential, the physics of fluids causes a rotating disk to be generated in the same way that when we open a tap the water falls down the drain making circles or when we remove the foam from a cup of coffee often spiral structures form). The action of gravity and the conservation of angular momentum cause all matter to flatten and form a very thin disk that preserves that rotation. When galaxies evolve and grow larger, that rotation speed is lost due to frictional movements. Then, random speeds begin to dominate and galaxies become more elliptical, that orderly movement is distorted. Crashes between galaxies, which are relatively frequent, also destroy the spiral shape of galaxies. In general, elliptical galaxies are old and have already stopped forming stars and, also generally, spiral galaxies still retain many young stars and even continue to form new stars, as in the Milky Way.

The smaller the galaxies, the more likely they are to be spirals rather than elliptical

A spiral galaxy is very flattened, with a privileged dimension that is that of the disk, where most of the stars are contained. On that disk there may or may not be spiral arms. The spiral arms are areas in which the density of stars is higher and that works like disturbance waves, the stars that come behind collide and accumulate and that makes the spiral arms increasingly larger (it is precisely in the arms where more stars form). Spiral galaxies can have a bulb in the center, which has a more spherical shape and, almost always, contains an older stellar population; In addition they can also have a bar, which is when the spiral arms do not reach the center of the galaxy at all, but there is a structure between them and the center, precisely, shaped like a bar. There are many studies on why bars arise and what implications they have on the evolution of galaxies but it is still an open research front.

In addition, spiral galaxies have a halo that is like a sphere in which there are very scattered stars with more random speeds than those of the rest of the galaxy that are on the disk. And then there is, of course, the dark matter component. All galaxies are formed in halos of dark matter, which is something we have not been able to observe but to detect. The way in which dark matter was detected was because the rotation speed that we see in the outermost part of the galaxies is greater than it would be if that dark matter did not exist. This fact was discovered by an American astrophysicist named Vera Rubin.

The Milky Way has a bulb, halo and dark matter and it is very possible that it has a bar although we are not totally sure. And it has five spiral arms, in one of which, quite outside, is our solar system.

Helena Dominguez Sanchez She is a doctor in astrophysics and a researcher at the Institute of Space Sciences (ICE-CSIC, Barcelona).

We respond It is a weekly scientific office, sponsored by the Dr. Antoni Esteve Foundation and the program L’Oréal-Unesco ‘For Women in Science’, which answers readers’ questions about science and technology. They are scientists and technologists, partners of AMIT (Association of Women Researchers and Technologists), the ones that answer those questions. Send your questions to us@response@gmail.com or via Twitter #nosotrasrespondemos.