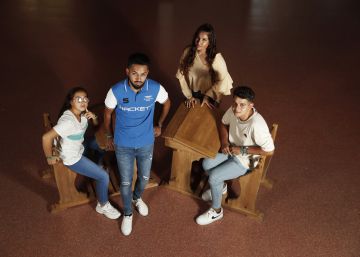 Miriam Salazar, 21, tells him without an iota of resentment: “In 1st and 2nd of ESO there were children who made comments to me: 'The gypsy is here' or 'Yes, I will believe that you are going to study' . Nonsense, but they end up affecting. I answered them ‘just as you study, I study’, and I went to the counselor who gave them a penalty. ” Years later, he left school overwhelmed by illness and homework, but now Miriam is in a medium degree in Administration. Follow the path marked by three high school cousins ​​who want to enter the Army and the police. They are the exception, because school dropout among the group is very high: 64% of gypsies don't finish ESO -Required for less qualified jobs-, compared to 18% total.

The Gypsy Secretariat launches a campaign, The gypsy desk, to make hostility visible. An artisan has built four desks that will travel through Spain. “They are full of tares that symbolize the difficulties of a gypsy. They limp because the educational system does not compensate for inequalities; the lid does not lift due to insulation; the wood is rough because of the discrimination of women… ”, describes Fernando Morión, psychopedagogue of the educational team of the secretariat. He, a 32-year-old gypsy, is the first graduate of his family. It is estimated that more than 800,000 Roma live in Spain, although there are no official data.

Monica Chamorro, director of the Department of Education of the Gypsy Secretariat, explains that the frustration of the families dates back to 1976 when it was finally decided to educate the illiterate gypsies. “The bridge schools were born as an agreement between the ministry and the Church. But it was difficult to enroll them without the minimum level of curricular competence. In the end, what was going to be a transitional measure, it was extended until 1985. They went to the gypsy school, had bad results … Zero inclusion. That now translates into the fact that many times the motivation of these families is not desirable. ” Truancy is very high. 42% of girls who drop out of school do so to help at home or to get married.

Chamorro praises the centers "that do very positive actions, which curricularly benefit them, with five children per class, very motivated teachers …", but remember that "that means they don't socialize." From the secretariat they distinguish two types of segregation: ghetto centers of gypsies or compensatory classes – for students who are lagging behind – exclusive almost for this ethnic group and immigrants. “They sent me to compensatory, where they put you to color, but I brought the Cambridge certificate from Primary and they put me in bilingual. The teachers had a list with all the Roma students and put ‘integrated’, or ‘half integrated’. From there only I left, ”says Marcos Montaño indignantly, who has just entered Law at the Carlos III University with a 13.2 out of 14.

“A gypsy has to demonstrate enough ability to enter a normal class. Why not do the rest, ”he asks. In addition, he adds, “there are students who discriminate against you. They tell you things like ‘why you enroll if you are not coming.” Marcos is an ambassador for a Gypsy Secretariat project: “Let's go to centers. We must finish with the cartoon image of the gypsy media: who does not study, who has mansions of the Gipsy Kings … There are gypsy lawyers, doctors … and they have to see that you are no more or less gypsy to study. ”

Chamorro explains that they try to convince families to school their children in other centers so as not to form ghettos, but it is not easy because of proximity and social relationships. The reception in many schools does not help. “Apparently neutral mechanisms are used so you don't enroll. They tell you that this itinerary is not good for you, that you may not end … And those low expectations come a time when you believe them, ”says the director.

“The history of the gypsy people is not in the textbooks, that causes ignorance and prejudice. Either our culture has become invisible or has been spoken badly, ”says Gypsy Secretary educator Fernando Morión. "I remember that one day in Lengua the text was starred by a gypsy who stole chickens and all my colleagues looked at me."

At 18, only half of the gypsies are in school. One in five leaving ESO returns to study after the age of 20.

“There is a lack of referents, not only family members, but also in the professions,” continues the psychopedagogue. “If in a Mathematics class with gypsy students you explain that the first woman in a university staff was a gypsy, open your eyes. It was a Russian, ”he says. It was the mathematical Sofia Kovalévskaya (1850-1891), who was hired in Sweden.

Morión also sets an example of the Holocaust, "we talk about the Jews and the LGTB collective, but we Gypsies were human guinea pigs." It is estimated that more than one million Roma died.

This is not the case with Isaac Heredia, a 2nd Telecommunications student at the Polytechnic of Madrid, who has not suffered racism and, like the other three, has family support. “I haven't had many books at home, but a grandfather much more cultured than me. He didn't have the opportunity to study and he loves to read, learn… ”, he proudly says. He is heard by Aitana Padilla, 13 years old and in 2nd ESO. "My family tells me to study, because if not then you have nothing." She recognizes from shyness that she is a very good student and that she wants to be a Mathematics teacher in an institute. She is already a reference for her sister, in 2nd grade. There are fewer gypsies to study, but whoever is encouraged goes further than men.

His future job is uncertain. Isaac, who would like to work in a large multinational, fears that with his "characteristics, maybe" the one who hires him will not "take that much into account." Miriam already knows what it is to work, she was a shop assistant, and she didn't feel discriminated against, but she knows about other girls who haven't managed to dispatch in a store. "They think you're going to steal." The most pessimistic is Marcos: “In a job interview the first thing they ask you is if you are a gypsy or they give you proof. If you are a cleaner, leave a ring to see what you do. ”