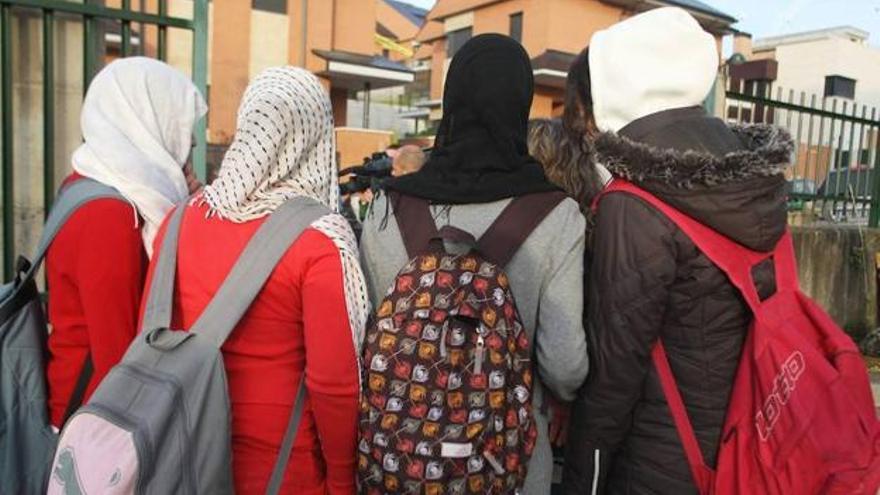 Hind is Moroccan and 16 years old, of which he has been in Spain for 15 years. She likes to draw, read and aspires to be a painter or modeller, “although by opening her eyes and seeing the injustices that exist”, she wants to be “someone with a voice,” she says, in order to change something in this world. He wants to study law, but first he wants to study high school in social sciences. For this, he chose the IES Alberto Pico, located in Santander (Cantabria), with a bilingual modality that only applies in that institute, but his aspirations are truncated when, once enrolled, he went to the center. “They don’t accept me with a hijab, they only let me in without it, but my religious convictions go with me, because if they don’t accept them they won’t accept me,” he adds.

Nadia and Imane are in the same situation, the latter using a fictitious name to protect her identity. They both live in Madrid. Nadia chose the IES Barajas, located in the capital, while Imane, the IES Prado de Santo Domingo, in Alcorcón. Both were received in the same way: “You cannot attend with a hijab.”

Nadia relates that when she went to IES Barajas they told her that she had to wait at the secretariat. An official then told her that she could not attend classes wearing a hijab and Nadia asked her to speak to the person responsible for that decision. The secretary of the institute appeared to inform him that, in effect, such a prohibition would apply to him. Nadia recorded the conversation “without thinking,” she says, “it comforted me to know that I was doing it.” Hind, due to the seriousness of the event and the helplessness she felt, did the same: “There are many girls who, surely, are going through the same thing and they may not be sufficiently aware of the extent to which it is legal, and they have to know that We have a voice that, if they don’t give us our rights, we will shout for them until we get them. ”

When Imane arrived at IES Alberto Pico felt “strange looks”. He was about to enter class when an official told him that he could not do so “with his head covered”, and, after asking why, she referred him to a rule that refers to the prohibition of hoods and caps. Imane decided to go to the secretariat and, after a brief conversation, an official snapped at her that, “just like I in your country I can’t go uncovered, you can’t go here covered either.” This center was already publicly denounced when it prevented another young Muslim woman from enrolling. Imane is clear about it, if the decision does not change, she will try to make a transfer of enrollment to another center and make up the lost days of schooling, but that she will not renounce her religious freedom because she sees it as “a lack of respect” towards her, her principles and your rights.

“All the centers that rely on the regulation of not being able to wear a hood or a hat in class, hide Islamophobia behind and, even though this regulation exists, they talk about accessories. My hijab is not an accessory to take off and put on,” says Hind who, after going through different administrative routes – meeting with the board, contact with inspection, education department … – has launched a campaign to collect support and that the Parliament of Cantabria responds to a simple question: “Why can’t I exercise my right to education without having to give up my identity?“The campaign already has more than 560 signatures and promises to continue growing.

Nadia received the same argument, “they told me that just as students are forbidden to use mobile phones and that people wear caps and hoods, they were rules and had to be followed. I think it is absurd that these types of issues are compared with a constitutional right”. For this reason, she comments that, even if the rule were to change, she has decided not to study at this center, although she would like no other girl to have to face the same. She assures that, as a result of making her case public, hundreds of testimonial and support messages have reached her: “I am in contact with many girls who have had the same thing.” “Those of us who choose to wear a hijab would like to stop seeing ourselves in situations like this and be able to access education without having to renounce what we consider to be ours,” he concludes.

The three centers mentioned are promoted, through their values ​​and statutes, as inclusive spaces that respect diversity and promote multiculturalism, something that, as we see, does not materialize in respect for identity, integrity and personal dignity, as well as respect for the freedom of conscience and ideological, religious and moral conviction of these young women. What we do observe is a flagrant violation of their right to equality, dignity, religious freedom and free access to education, among others.

It is not possible to dissociate what happened in these situations from the barriers faced, on a structural level, by the Muslim population in Spain. In “The radicalization of racism. State Islamophobia and anti-terrorist prevention” Ainhoa ​​Nadia and Salma Amazian analyze “how racism towards people and communities of Muslim tradition sinks its roots in the historical and structural Islamophobia” prevailing in Spain. During the analysis of this historical continuity, they cite some of the laws that have made it possible, an example is the enumeration of Juan Goytisolo, who pointed out a series of anti-Muslim pragmatics, among which is the one approved by Cardinal Cisneros in 1499 that gave to choose between conversion to Christianity or expulsion from the territory. Later in 1516, the Muslim population was forced to abandon their characteristic dress and in 1562 the Arabic language was forbidden to the Granadans. It is difficult not to draw a parallel between the described Islamophobia and what happened in the three institutes mentioned.

The knowledge of history must serve to fight and end against the structural violence that, despite the passing of the centuries, continues to prevail in the bureaucracy and the politics of the States. The teacher and researcher Fernando Bravo López described in “What is Islamophobia?” the nature of this phenomenon, capable of combining with different ideologies and mixing with forms of religious intolerance and racism similar to anti-Semitism. “Anti-Semitism was a reaction against the emancipation and integration of Jews in 19th century Europe that was based on anti-Judaism to legitimize the legal inequality of Jews and promote their discrimination and segregation,” he says.

“Their integration is not possible, and, therefore, protection must be the non-granting of the same legal status to those who pose a threat,” anti-Judaism postulated then. The same process would be followed today by Islamophobia. The presence of the Muslim population generates the reappearance of a context of emancipation. Therefore, when the Muslim population is pointed out as a threat from Islamophobic postulates, it is not surprising that a reaction against that emancipation is reproduced and that they enjoy social support. Exactly the same thing that these public institutions are reproducing that, under the protection of current regulations, intend to place Nadia, Hind and Imane in an insurmountable dichotomy: exclusive and exclusive access to an education that is presented as free, accessible and respectful, but that it is not, or your own individual freedom, your religious freedom.

Tags: convictions, education, exercise, give up, no, religious, right