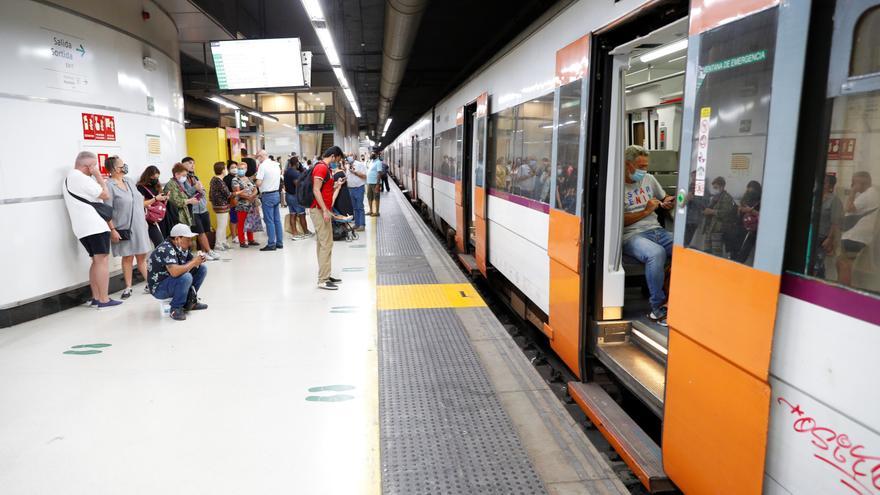 After two days of strike by the Renfe machinists and, with another six days of work stoppages ahead, the possibility of an agreement between the workers and the company seems far away at best.

If nothing changes, the delays and crowds on the platforms of the main train stations, especially in the Cercanías services, will be repeated next week in what is the first labor dispute faced by the Minister of Transport , Raquel Sánchez, since her arrival in office.

We analyze the causes of this labor confrontation and the resolution options.

Who has called the strike?

There is not one strike call, but two. The first, lasting eight days, has been called by the majority union among Renfe’s machinists, Semaf.

A total strike that began on Thursday, September 30 and will last until October 12, a holiday and return from the bridge.

The second call is partial, called by the Railway Union (SF), a minority among the train drivers and which represents other labor groups, such as workers in workshops, cleaners or lockers. SF has called work stoppages on the same days, but only during two time slots, from 7:00 to 9:00, in the morning; and from 6:00 p.m. to 8:00 p.m., in the afternoon.

The strikes have not been endorsed by other unions, such as CCOO or UGT.

Within the representatives of the Renfe workers there are different opinions. Semaf considers that the strikes should be long-lasting, because, they explain from the union, it is a conflict of depth where they do not perceive the will for dialogue on the part of the company.

Meanwhile, SF has opted for partial stoppages because, it understands that, even if it is a long battle, a situation of attrition must be avoided.

For its part, CCOO indicates that, although there may be differences of opinion with Renfe’s management, “there are still no sufficient reasons to call a strike and harm citizens,” says the general secretary of the CCOO Railway Sector. , Pepa Páez.

Why is it convened?

There are three reasons, as listed by the organizers: lack of trains, lack of drivers and the fear that Renfe will break the integrity of the railway service, with a process of transfer of powers, first to Catalonia and then to other Autonomous Communities.

Regarding the lack of trains, both Semaf and the Railway Union assure that the services that were provided prepandemia have not been recovered. They indicate that, currently, the long distance service is 70% compared to the precovid situation; in medium distance, 65%; and in Cercanías, between 90% and 95%.

They believe that the company has not been transparent when it comes to explaining why the same number of trains that circulated before the coronavirus cannot be recovered and, at the same time, they see it difficult for that service to be provided again given, they assure, that it is not employee replacement rates are being met. At the end of 2020, Renfe had 5,250 drivers, the lowest figure since 2016. At the end of 2019, there were 5,485.

The third reason, they fear, is the transfer of powers in the Cercanías, progressively, to the Communities that request it. The Generalitat Valenciana intends to claim them.

In Catalonia, the Government is already the one who manages Rodalies and Renfe, which operates their trains. However, the organizers point out that the secretary general of the Department of Vice-Presidency and Digital Policies and Territories, Ricard Font, has requested on several occasions the total transfer of powers. The last, this week, after the chaos caused in the stations by the strike.

Is it the same throughout Spain?

The strike is nationwide but the impact is being very different depending on the territory. This Thursday and Friday the problems have been in Catalonia, Madrid and in the Valencian Community, where, according to Renfe, the minimum services are not being fulfilled because the machinists who were summoned to carry them out, have not gone to their work station. However, the organizers emphasize that these services are being fully respected.

Renfe highlights that, on Friday morning alone, more than 360 trains have been ‘parked’. In the morning stoppages, he breaks down, only 39% of the minimum services of Rodalies have been fulfilled, 37% in the Cercanías de Valencia and 75% in Madrid.

And what happens if the minimum services are not met?

The Cercanías, which are used by more than 1.16 million people every day, are the main point of collision between workers’ representatives and the company during these days of strike, which can make negotiations take on new vigor given the impact on users or, on the contrary, that positions are castled.

The union representatives affirm that the workers comply and that if there are no trains it is due to poor planning by the company. The reason, they point out, is that this Wednesday the National Court lowered the minimum services decided by the Ministry. It reduced them from 100% to 75% at peak times; and from 75% to 50%, in off-peak hours, because it considered an “excess” those set by the Administration.

These percentages are not applicable in Catalonia, where the Department of Business and Work established them at 85% of the usual service.

The decision of the Hearing was on Wednesday and, according to the conveners, Renfe did not send all the letters in time urging the machinists who had to fulfill their shifts to work.

Renfe indicates the opposite: that the requirements are not met and that there may be consequences. This Friday it has already opened “the first files to train drivers from Rodalies de Catalunya and Cercanías de Valencia”, which is “where there have been more incidents considered very serious”.

Some files that will be studied case by case and that can lead to penalties of between 5 days of suspension of employment and salary until dismissal.

What does Renfe think of the strike?

Renfe denies the major and does not see reasons that justify these stoppages. Regarding the transfer of powers to Catalonia, the company points out that the Ministry of Transport has only committed to completing the budgetary allocation of the cost of the Rodalies service, so that the Generalitat pays, as the owner, the costs to Renfe and not the state. And at the moment, there are no more transfers on the table.

Regarding operations, it considers that, although full normality has not yet recovered, it is still working on it and that these stoppages may prevent 78 new AVE – Long Distance services from circulating again on different lines until the third week of October.

And, regarding the hiring, he affirms that, with the incorporation of machinists that he has planned for this final stretch of the year, he expects to conclude 2021 with 5,720 machinists on staff, 500 more than at the beginning of January. It would be achieved, it justifies, the highest number of machinists in the company since the start of the Employment Plan in 2016.

And the Ministry of Transport?

The Ministry of Transport calls for the minimum services to be met and at the same time the right to strike is respected. This was assured this Friday by its owner Raquel Sánchez. “Renfe has transferred its outstretched hand,” he said.

However, both Semaf and SF and CCOO acknowledge that there is no dialogue table convened, at the moment. The last meeting with the Secretary of State for Transport, Isabel Pardo de Vera, was a few days ago. An appointment in which the transfer of powers to Catalonia was discussed and where no date was set for a next meeting.

Do youHow much does a machinist charge?

According to union representatives, the issue of wages or working hours are not, in any case, behind this strike. Another thing is that they are in a not too distant period of time.

Renfe’s last collective agreement was approved in 2016 and expired a year ago. One more exercise was extended with the support of CCOO and UGT, the abstention of CGT and the rejection of Semaf and SF. The latter is against workers with the same functions charging very different amounts depending on the years they have been with the company.

A driver who joins Renfe receives, according to this agreement, 17,567.61 euros per year, to which he can add another 1,028 as an annual supplement. In the case of a chief machinist, the annual salary reaches 39,844 euros, plus another 7,200.9 euros as a supplement.

So is there a solution in sight?

If the convening unions do not see the will to negotiate on the part of Renfe, the end of the strikes does not seem near. “They do not have the will to solve the conflict. We will continue,” he summarized. They “feel” the disruption caused to users but, they say, “we do not ask for anything that a Renfe user does not ask for, more trains and better service”.