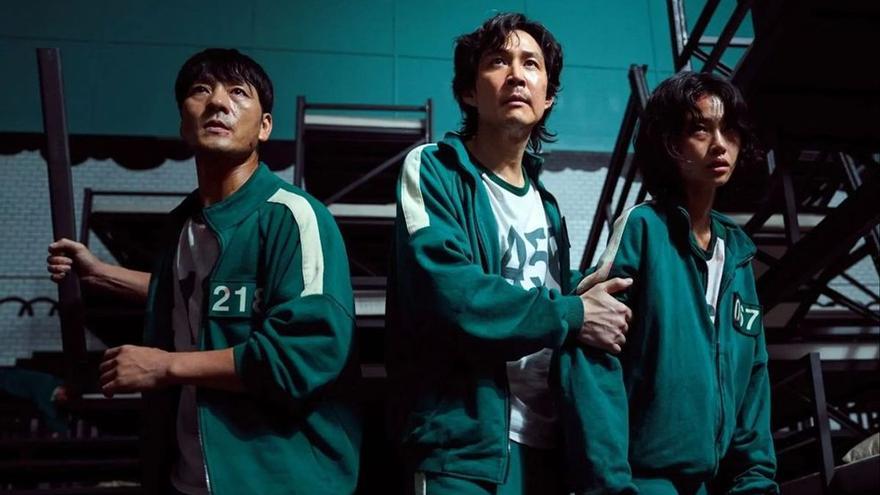 In South Korea, Lee Jung-jae it is quite a star. The actor who gives life to unfortunate protagonist Seong Gi-Hun (unemployed, divorced, penniless, stealing his mother’s pension and then gambling it on horse stakes, losing, of course) is also model and businessman. A successful man who has little to do with his alter ego in the series, who, after being contacted by a stranger in the subway, decides to participate, along with other indebted people, in a Deadly Quiz game with a final prize of 45.6 billion won; more than 32 million euros. Lee, 47, grew up in a prospective family from Seoul. When he was very young, he was working in a cafeteria, where a talent scout discovered him and signed him as a model. He walked for two years on the catwalks until taking the leap in interpretation. He made his debut in the series ‘Dinosaur teacher’ (1993) and among his best-known films stands out ‘Il Mare’ (2000), which was later adapted into ‘The Lake House with Keanu Reeves (2013). In honor of that movie, the actor also He named Il Mare to the luxury restaurant chain that has. He also owns a real estate development company and has founded the entertainment label Artist Company, along with actor Jung Woo-sung. In addition, on Netflix he also stars in another series, ‘Chief of state’ (2019), a political drama, and stands out in the ‘thriller’ ‘Svaha: the sixth finger’. His current partner is the wealthy heiress, Lim Se-ryung, the eldest daughter of the president of Korean food giant Daesang Group.

The oldest participant of ‘The Squid Game’ is Oh Il-nam and in his green tracksuit he wears the first number, 001. At first they tell us that he decides to undergo the devilish tests because he has a brain tumor, and he does not have much left to live, and thus, if he wins, he could leave him a good inheritance to his own. The old man is all tenderness, and he immediately wins over the protagonist of the series, who protects him. But, like the rest of the participants, he also hides some secret (and not only that he knows how to play marbles very well). Oh yeong-su, 76, is the actor behind the endearing character, and in his career he has played mainly monk roles, including the films ‘A Little Monk’ (2003) and ‘Spring, Summer, Autumn, Winter … and Spring’ (2003 ). Thanks to the success of the series, he has now signed for the South Korean fried chicken franchise Kkanbu Chicken, to which he lends his image.

Cho Sang-wooGi-hun’s childhood friend, with whom he played the squid game so many times, is the tallest guy in his neighborhood, having been able to study at the best university in South Korea. He became an investment banker and stole money from his clients to invest in the stock market. Like his friend from the neighborhood, he also lost everything and debts haunt him. In order not to end up in jail, lose his house and make his mother lose his business, desperate, he joins the macabre tournament. Park hae soo, 39, is a hugely famous Korean k-drama actor, and is best known for being the protagonist of one of the most popular, ‘Prion Playbook’ (2017). In addition, he has just signed for the Korean ‘remake’ of ‘The paper house’, which will be titled ‘Money Heist’, in which he will play the character of Berlin, the brother of The Professor who plays the actor Andrés de Fonollosa.

The young ‘top model’ korean Jung Ho Yeon, who has just been named new global ambassador for the Louis Vuitton brand, brings to life in the series the participant number 67, Kang Sae-byeok, a young defector from North Korea who needs money to rescue her family, and is willing to do anything to get it. He steals portfolios at the piece rate, but that does not give him enough to achieve his short-term goal. So, sure of her abilities, the go-getter decides to join ‘The Squid Game’. There, he will immediately steal the heart of the protagonist, Gi-hun. Also to the model herself, who has explained how was booked by the production company while preparing for New York Fashion Week: He read the script in one go, stopping only to eat, sent the video as an audition, and the director immediately asked for it. The hustler character in the hit fiction is the first television role Jung, 27, who had previously appeared on season 4 of Korea’s ‘Next Top Model’. And it is that she has been modeling since she was 16 years old, and has been covered in magazines such as ‘Harper’s Bazar’ and ‘Marie Claire’.

The actor Heo sung tae brings to life the gangster machirulo from the series. His name is Jang Deok-su and his number, the 101. The mafia chases him and to get away from it he joins the macabre adventure that is proposed to him in ‘The Squid Game’. His character is already terrible bad before traveling to the island where the series takes place, but as the contest progresses it becomes even more terrible. He takes advantage of the people around him to pass the tests; and if he has to kill, he kills in cold blood. The hated and arrogant fictional villain has nothing to do with the real personality of the actor, 44, a cat and animal lover, which he adores and photographs in cute snapshots that he then shares with his fans on Instagram. The interpreter has participated in more than 60 productions between Korean film and television, and among his most popular roles is that of the film ‘The age of shadows’ (2016), which was chosen to represent his country in the category of best foreign film in the 89th edition of the Oscars. The vocation came late, after graduating from Busan National University, where he majored in Russian. For many years he worked for a commercial ship and boat building company before he took his first role.

The actress Kim Joo-ryoung gives life to the histrionic participant number 212, named Han Mi-nyeo. Her character, screaming, procacious, wicked and always disengaged, is the female equivalent of the thug gangster Jang Deok-su. They are made for each other and both are used, also sexually, to stay alive in the game. The 45-year-old South Korean interpreter, married with a son, began her career in the theater and made his film debut in 2000, in the role of Werther in the movie ‘Plum Blossom’. She is a well-known face in her country, where she has been seen playing a nurse in the 2003 film ‘Memoirs of a murderer’.

Abdul Ali, the player 199, is perhaps, the character kinder and naive Of the plot. It is true that he stole money from his boss, and that he crushed his fingers with a machine from the factory while running away with the pasta. But his heart is good, and he does everything to help his wife and one-year-old son, with whom he came to South Korea looking for a better life, get ahead. He is very innocent and believes that no one can be so devious as to deceive him. That is why he has become one of the characters most beloved of the series. The 33-year-old Indian actor who brings him to life is Tripathi Anupam, with extensive experience shedding tears in Korean k-dramas. He began acting in 2006 and traveled to the South Korean country four years later as an international student at the Korea National University of the Arts. Since then, he has participated in films such as ‘Asura: The city of madness’ (2016) or ‘Space Sweepers’ (2021) and melodramas such as ‘Hospital playlist’ (2020) or ‘Taxi driver’ (2021).

The police Hwang jun-ho He finds a golden card from the game while searching the flat for his missing brother. He decides to infiltrate the game by posing as one of the red monkey guards whom he sends to the other neighborhood. Hidden behind the fencing helmet worn by the jailers, he will discover with horror a whole perverse plot in which people’s lives seem to be worth less than nothing. Although he has acknowledged that he would have liked to have had more minutes in the series, the truth is that the young actor and model Wi Ja JoonThe 30-year-old role of the undercover cop is giving him tremendous joy. Not only has he added thousands of fans on his social networks, beyond his native Korea, but he has just starred in the local cover of ‘Men’s Health’ magazine of this month, where he shows an enviable physique. And it is that his thing is to be a heartthrob, as he has shown in ‘doramas’ such as ‘Something in the Rain’, ‘Gonjiam: Haunted Asylum’, ‘Midnight’, ‘Nexen Heroes’, ‘Shark: The Beginning’ or ’18 Again ‘, among others. He has also done some musical first thing, because he himself interprets ‘Maybe it’s too late’, the main ballad of ‘Matrimonial Chaos’, a 2018 film in which he also appears.

With his ‘profident smile’, the recruiter does not kill anyone technically, but it helps, as he takes advantage of the most desperate and vulnerable people to manipulate them and encourage them to bet everything, their lives, for a quick money. This is the perfidious role reserved for the actor Gong Yoo, the most internationally known Korean megastar, the glittering ‘guest star’ of the latest Netflix blockbuster. His character is the one who signs Gi-hun in the subway for the squid game, challenging him to try his luck in another game, the ddakji. The 42-year-old actor is the protagonist of the hit zombie movie ‘Train to Busan’ (2016) and the fantastic ‘Guardian: The Lonely and Great God’, from the same year.

Behind the raincoat and the black mask in 3D hides the actor Lee Byung-hun, aka ‘The Front Man’. With his distorted voice and always attentive to all the cameras that monitor the game and the players, he is in charge of directing the game and the evolution of the games. From, we suppose, a megalithic attic calls its mysterious superiors to explain to them how many have already fallen and who still survive. In real life, the 51-year-old actor is also a leader in his own way, as he is one of the most famous actors in Korea with fifty films behind him. And not only in his country, because he has also appeared in some American films, such as’Terminator Genisys‘(2015), which can also be seen on Netflix.