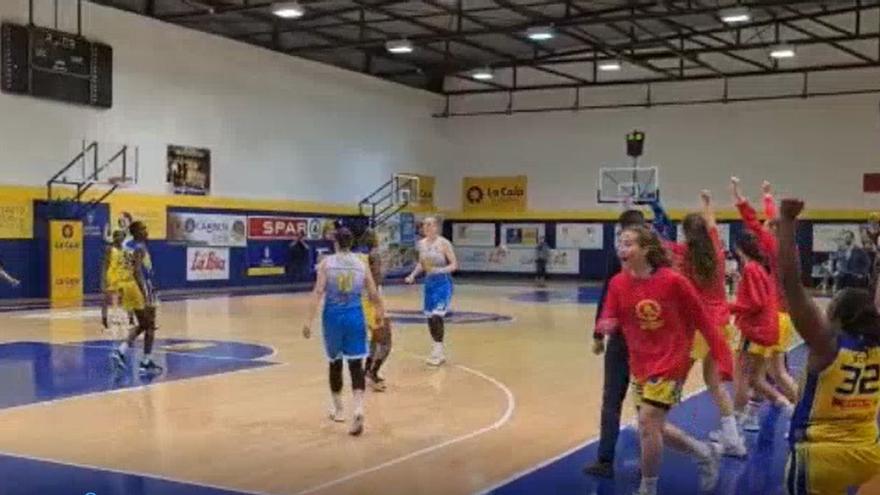 Is there a team that can stop this SPAR Gran Canaria? At least, so far in the last month no one has succeeded. The insular team added their fourth consecutive victory to arrive at twelve o’clock of the season after recovering from a bad start to the game, where he lost by twelve points, and rowed to take the crash against Cadí La Seu (74-71).

One more day the women in yellow played like a true team that believes in itself and up to five players reached the double digits of scores. Sika Koné, with 18 points and 14 rebounds, he dominated the contest one more day; next to the 15 of Sparkle Taylor, who assumed the hot balls in the last two minutes and with three baskets sentenced the duel. Spain (13), James (12 and 10 rebounds) and Ndiaye (10) they just got away.

The SPAR hit the track to face a Cadí La Seu who wanted to show his cards from the first minute. The Catalan club, in a direct fight for the Playoff with the yellow team, had to do the rest on their visit to La Paterna if they want to be part of the eight teams that play the postseason.

The first six minutes were practically a lot of baskets for those of José Carlos Ramos. Only a basket of two from Sika Koné managed to stop the partial 0-7 with which the insular rival opened the contest. Laia Raventós’ physical superiority in painting determined the future of the first quarter.

With Kai James and Sparkle Taylor charged with two fouls in the early stages of play, it was María España who picked up the SPAR offensive witness. The Mallorcan managed to meet again with the triple after a last game against Araski in which she did not score a single one in her seven attempts.

He managed to row the yellow team until 14-23 with which to face the second quarter. Those of La Paterna have been characterized during the season for being a team that never lowers its arms and was going to try to reengage in the game as soon as the defensive concepts that Domingo Díaz demanded from the back of the island bench to his players began to take effect .

Had the afternoon Maria Spain, With his second consecutive triple, the guard put the 24-25 in the light so that Bernat Canut, the coach of the Blue and White team, stopped the island reaction as soon as he returned from halftime.

Maximum equality was established. The difference was not more than two points in the following moments of the period. The speed with which the Cadí was moving at the start of the crash was already past water. Greater defensive criteria than those of Ramos, although the referee trio punished Kai James excessively in the body in the paint. The North American sat on the bench and the insular coach lamented, a small quintet to face the last minutes before reaching the break.

Again Sika Koné accumulated all the seconds played in the first half to make it clear that he has to receive the award for best center of the season. The one from Mali captured 8 rebounds in 20 minutes, six of them offensive, to work the comeback of points with which SPAR was seen in the first quarter and that they erased with a stroke of the pen to go to the locker room with 43-39.

The SPAR started the third quarter like a motorcycle. Three of their players were already showing double digits in scoring. Koné with another double-double, 10 points and 10 rebounds; the top filmmaker so far, Spain, with 13 (three triples); and James, with another 10 points. Tens everywhere to take the lead in the same number 52-42 fifteen minutes from the conclusion.

The Cadí was deployed on those borders leaning in a coral way. Except for Gala Mestres, all the Catalan players had achieved at least one basket in play. They did not want to deliver the spoon so quickly and throw away any option to fight for the Playoff in the two remaining dates (they have one game less than SPAR).

The foul bonus brought the visitors closer to 55-50. “Calm down,” Diaz said every time he approached Ramos behind the island bench. The excitement to rush the options to win the game were on the surface.

Ariadna Pujo began to believe in taking La Paterna’s loot with her baskets. With six to go, Cadí was just one point 59-58 and they launched to regain the lead. Then a triplazo from Djeneba Ndiaye, and a Sika Kone basket once again gave the island a comfortable mattress.

The inertias went through neighborhoods. If the women of Ramos seemed to take control of the game, Cadí responded with a partial 0-7 to go ahead after more than 25 minutes behind in the light (64-65), to which in less than forty seconds they returned to put SPAR ahead (68-65) two minutes from the conclusion. Authentic end of heart attack.

And the magic of Sparkle Taylor appeared, practically disappeared during the entire match, her hand warmed to take the reins and she played the fiery balls. Six points almost in a row for the North American to direct the victory and defend the last ball with courage until the final 74-71.

RTVE, after Luna Ki’s withdrawal from the Benidorm Fest: “There is no reproach or criticism towards her”