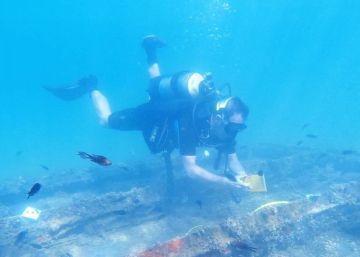 About 2,600 years ago, between 610 and 580 BC, the Mazarron II – that's what the researchers call it, although nobody knows its original name – it went down with a shipment of lithium lead, an Argentine waste from which silver can be extracted. It was about eight meters long and was stranded only 2.5 meters deep and about 50 off the coast of Mazarrón (Murcia). In 1994, his wreck was found by some divers, in 2000 it was covered with a steel dome to preserve it, In August 2019, the Murcia Region announced that it would be extracted and today the Scientific Commission for Monitoring the National Plan for the Protection of the Underwater Cultural Heritage, which advises the Culture Ministry, has recommended that it remain under the Mediterranean until new and more comprehensive reports are completed. The steel shell that covers the ship, as EL PAÍS was able to confirm, is already six centimeters from touching the wreck, since the sand on which it rests is being removed and the ship rests on a rocky bed.

The secretary of Fine Arts, Román Fernández-Baca, was very direct this afternoon: "The boat is a unique and crucial testimony," so Culture has "a great concern." But the national scientific commission that advises the ministry has calmed the waters by first recommending to strengthen the protection of the ship with precautionary measures, then stabilize the fund and then prepare a new report – which will take six to eight months to write – before of making a decision The study can conclude that the boat is removed, as desired by the Government of the Region of Murcia, or leave it on-site.

Fernández-Baca acknowledged, however, that "there was no unanimity" between the components of the commission, although the mainstream supported, in addition to preserving the good, "studying the risks", which is what has finally been agreed.

The general directors of Cultural Industry and Cultural Property of Murcia, Rafael Gómez Carrasco and Juan Antonio Lorca, present at the press conference after the commission was held, highlighted the "example" of this cooperation between administrations thanks to a " joint work ". They denied, in addition, that their Government is contrary to new reports, despite the fact that in August, after knowing that steel was only six centimeters from the wreck's wood, all regional archaeological alarms jumped.

At that time, it was announced that the first thing that was going to be done was to disassemble the ship to subject the pieces – woods and ropes – to a desalting process and, later, to bathe it in polyethylene glycol, a product that allows to consolidate the wood by serving as substitute for the water that it contains and that deforms it. The restoration process concludes with lyophilization, whereby the water to which the polyethylene glycol has been added is frozen and converted into steam without going through a new intermediate liquid phase.

A first Phoenician boat (Mazarrón I) was discovered in 1989 because of a "change in the dynamics of the coast", which caused movements in the sand and then its unearthing. Five years after the discovery, another underwater team located the keel and frame of another similar ship (Mazarrón II) in the vicinity of the first and that remained almost intact with its cargo. The remains of the first boat were extracted in 1995 and taken to the National Museum of Underwater Archeology, but the same did not happen with the Mazarron II, but a protective capsule was placed in 2000 as a temporary solution to the risks

But, according to specialists hired by the Region of Murcia, the "wreck is already broken", so they proposed in August to extract the chopped ship. The problem is that the sand continues to move and that the steel hull does not cease to press the wooden wreck. The professor of Archeology at the University of Zaragoza Manuel Martín Bueno told EL PAÍS that "the integrity of the vessel depends on the temporary evil not happening". But now all these forecasts have been on the air waiting for new reports. Central and Murcian government have raised the white flag at the same time. For now.

The National Museum of Underwater Archeology (Arqua), in Cartagena (Murcia), it is small. Perhaps, experts say, too much for a country that looked at the sea in its expansion in America and the Philippines. However, every corner of the great central hall overflows maritime history. Upon entering the remains of the 'Mazarrón I' are distinguished, the ‘twin’ from which he has now raised the controversy between administrations. It was located in 1988 by experts from the museum and the National Underwater Research Center.
The museum's director, Iván Negueruela, launched the so-called ‘Fenicia Ship Project’ between 1993 and 1995 to inspect the Mazarrón Bay in deep. Thus in the museum the keel, of 3.98 meters, frames and part of the board is preserved. The boat was built with cypress, pine, fig and olive wood. It is dated in VII a. C.

Next to it are replicas of laboratory devices so that visitors can get an idea of ​​how it was rebuilt.