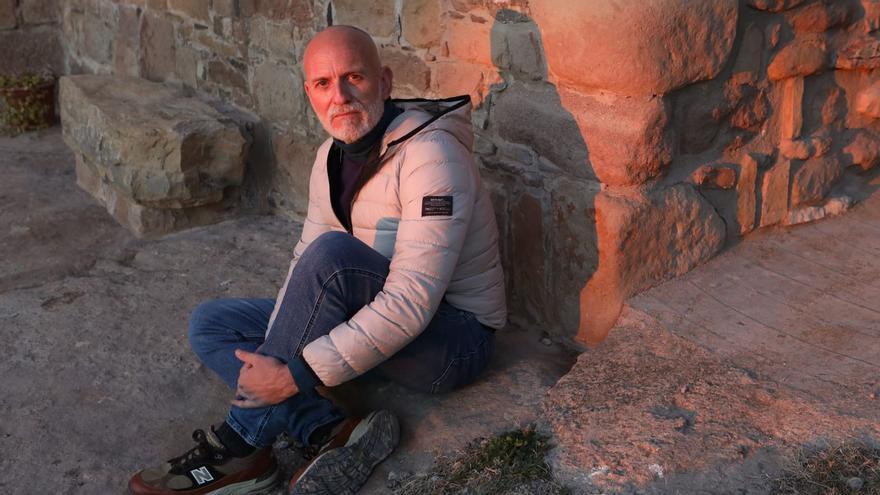 Despite the fact that his books, full of kindness and good feelings, are very luminous, the writer Alejandro Palomas sensed a secret pain, or not so much, as he himself is in charge of revealing. Everything was there in front of the eyes of the readers who, as soon as they read between the lines, could think that the author was dragging a secret. Now he has made it public, or rather he has put it on a plate for the press: when he was 8 years old, a brother from the Salle de Premià de Mar he groped him twice and in a third he raped him in the infirmary where the priest left him tied to the bed "to prevent him from harming himself" because the little boy had injured his eye. After the hand grenade was thrown, the author is agitated by all the signs of solidarity received but also satisfied by having received a direct call from Pedro Sanchez.

Did you imagine this impact?

I have made it especially for it to be so. He did not want a personal revenge against the aggressor who is now over 90 years old. Nor is it something personal. I'm recovered... (laughs wryly), well, recovered... you can say I have a life. Men appear and disappear but the perverse dynamics continue.

But if it is spoken about, if it is publicly denounced, there is a possibility that these dynamics will be transformed. What have you told the president?

He -or his chief of staff- saw my tweet and called me early in the morning. I was still in bed. He told me about the impact that the news had had on him and he began to tell me about the fine print of politics, something that doesn't interest me. I have told him that what he needed is for my story to be heard and from there an appointment has come out to see us quietly next week.

At the moment a parliamentary investigation commission is being proposed on the abuse of minors by members of the Catholic Church, cases like this could be a spur.

Until yesterday, Esquerra, Bildu and Podemos were in this commission, but in the conversation Sánchez announced to me that the socialists will also integrate it. So something has been achieved. I have been a bit of a 'whore' when I suggested that if there are 300,000 people who have been abused as children and no one has given them the opportunity to listen to them or give them a voice, you have 300,000 people who are not going to vote for you. Come on, you have to listen to the people, not your chief of staff. If with my statements I will get a ray of hope.

You denounce it now but you had already dropped in interviews that you had a difficult childhood.

In interviews and in presentations. I once gave a TED talk at the University of León before 1,200 people where I detailed the abuses. Nobody asked me.

Perhaps there are many people who are uncomfortable hearing that.

Why at this time?

Because my mother died, my father too. They did it eight days apart. She skipped a screening for her skin cancer because of the pandemic. My father had leukemia.

Had they been alive, would they have made it public anyway?

I do not think so. I told about it at home and they went to speak at the school where they were told that they would solve it and that it would not happen again. "We'll talk to the brother and we'll work it out, but you guys keep it low key," they were told.

I mean, they covered it up.

My mother spoke to me about 'discretion' and I did not understand it, I did not know what exactly this word was. She had only read in the comics of literary jewels that of "fire at will". But the discretion whatever it was worked for them: no one spoke of the subject again.

For you, your mother, as you have told in your books, has been the most important person in your life. Do you think she felt guilty?

She believed that she hadn't done everything that needed to be done, but she didn't know how to deal with it. Talking about it was the only taboo between us. Whenever the subject of Marist abuse appeared on TV, she immediately changed the channel.

The assaults and rape as you have recounted them are terrible. It hurts to hear them. What was going on inside you when they happened?

The night of the rape I was in bed in the infirmary of one of those vacation colonies for priests. Next to me was a large window. Between the visits that the brother made to me at night while I was immobilized, I only thought that the day would come soon and all that would end. While he raped me, I looked at the window and thought about the absurd possibility of throwing myself out of it but I couldn't. There was also the crazy idea of ​​asking my mom how Mary Poppins gets to fly out of trouble.

Mary Poppins is a recurring image in her literature.

'A son' that was awarded the National Prize for Children's and Youth Literature should have been called 'The boy who wanted to be Mary Poppins', which is how it was translated into French, but no one thought to ask me where that one came from.

The degree of loneliness and abandonment that an assaulted child faces in childhood is enormous.

It is true, but there is something else. The terrible thing is the abandonment of your aggressor, in whom you trusted because you were a vulnerable child and you were convinced that he was going to protect you, until he violates you and the earth opens up at your feet. You have no one because you blindly trusted and you cannot seek help because he was the one who provided it to you. That is the paradigm of habitual abuse, something that if it happens can be repeated in adult relationships, as it has been in my case. Child abuse is a victim factory for adult abuse.

Besides, that person he trusted was a man of God, a religious.

Think that this happened in 1975 when Franco was alive. When my aggressor ejaculated he told me: “You see what you make me do”. A phrase that I could put in neon lights on my front door.

He knew very well how to transfer guilt.

As a child he asked me many questions and it was somewhat complicated. While the aggression was happening, I only had sensations of anguish, disorientation, even physical damage, but I did not know how to order them mentally. But hearing that phrase, he made me believe that I was responsible, that I was the one who had to find the solution so that he would not act like that. He was drowning me in murky waters.

He has always defined himself as a lonely child.

I was a very effeminate boy, when I was very young I looked like a girl. I didn't play soccer, I didn't know how to relate to children and I was confined to reading. I had many numbers for the brother to notice me. I sure wasn't the only one.

It is important to verbalize these situations that until now had no words. James Rhodes was helped by writing them. Will everything end up being a book?

I do not know. I have other projects, although I'm sure my agent has received many proposals for him to do it. But deep down I think that these things should be done more from the emotion than from the intellect, which has many more defenses. I don't rule out writing but at the moment I feel more like an activist telling this out loud. I have managed to get Pedro Sánchez to call me.

What do you think that the president of the Episcopal Confederation said that the Church will investigate all cases but will not accept an independent commission?

This reflects very well what is the role of the Church. It's sad but not surprising. The Church should have an active and not a reactive role, perhaps because she still has a lot to hide. I cannot understand that they still feel that crimes committed by priests are not the responsibility of the State. It doesn't help me that these types of crimes are dealt with in the Vatican because I have nothing to do with the Vatican. I am a citizen, not a faithful, and my civil rights are what they are. Priests must answer to the law. And the law is ours and not the church.