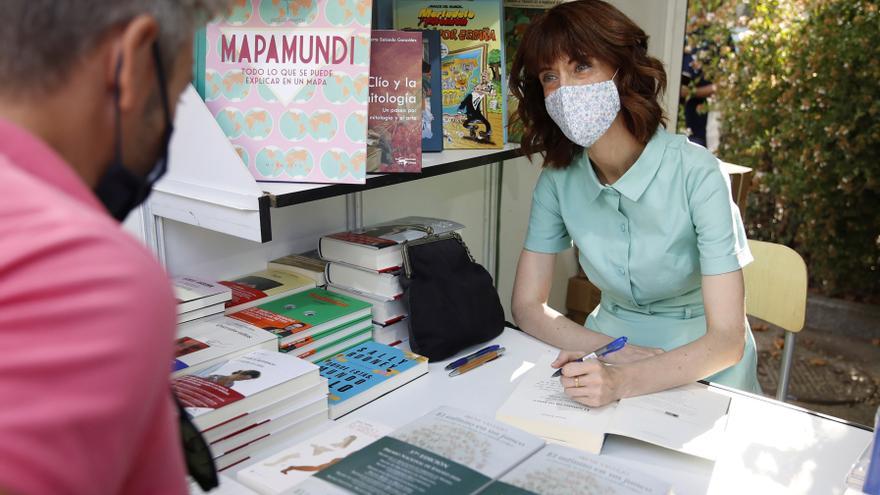 It has just been two years since the appearance of the book that revolutionized the popularity of a genre condemned to be a minority. Infinity in a reed (Siruela), by the author Irene Vallejo, has exceeded 335,000 copies sold only in Castilian and has been translated into 33 languages ​​”for now”, indicates its editor Ofelia Grande. “Irene has invented a genre: the narrative essay. It is a formula that reaches many more readers, who traditionally thought that the essay was contrary to entertainment. A National Essay Award that sells more than 2,500 copies is a miracle and the dream of any publisher. Irene’s thing is not going to be repeated … easily “, predicts the editor, which has its greatest commercial success in Sofia’s world (1991), by the Norwegian writer Jostein Gaarder, with 1.5 million copies sold, followed by Little Red Riding Hood in Manhattan (1990), by Carmen Martín Gaite, with 600,000 in more than twenty years. And then, Irene and her junk, “which over the years will reach a million copies.” These data are what lead the competition to look for their Irene Vallejo.

Siruela’s best-selling non-fiction books have been written by women. The previous success was Imperiophobia, by Elvira Roca Barea, with 150,000 copies. Just published The fabric of civilization in which the North American Virginia Postrel traces a history of the world through fabrics: in just two weeks she has reprinted three times. “The authors have a unique sensitivity for narrative non-fiction. Men are more academic, they do not turn their research into a story like them,” says the editor. Few nonfiction manuscripts arrive at Ofelia Grande’s work table, she says that one in ten and of them there is almost parity. In that Siruela is also an exception.

According to the study carried out by the Clásicas y Modernas association, with the titles published in 2017 and 2018, one year before the appearance of Infinity in a reed, barely 20% of the essay production was signed by women. “The intellectual leadership of women remains undervalued,” concluded the report that warned that only with an egalitarian essay proportion “we will banish the androcentric perception of intellectual authority.”

Pilar Pastor was one of those responsible for this study, the data of which are still valid. “We didn’t think the numbers were going to be that low,” he says. “Women have not been valued for their thinking and their opinions have never been considered. That is why in 46 years of the National Essay Award, only six authors have been awarded. That is why the data is so important because the greater the need transparency, greater inequality, “says Pastor.

The key to the notable differences in non-fiction publication figures is in what Pastor defines as “self-exclusion in the face of inequality”: the lack of references causes a lack of vocation. In 2020, according to ISBN data, 13,672 authors ‘titles and 6,185 authors’ titles were published in non-fiction. “That is why Irene Vallejo has been a great reference to follow, because she gives value to the thought of women, she gives value to all of us. Also Ana de Miguel (has published this year Ethics for Celia, in Editions B). We are exultant to come to light, because in this way we show that we are capable of collaborating in a better world, “says Pastor.

“I am not an exception,” says Irene Vallejo herself to this newspaper. And he quotes Marta Sanz, Edurne Portela, Marina Garcés, María Belmonte, Gabriela Wiener, Lina Meruane, Veronica Gerber and many more. “I think change is making its way,” he warns. “Thought is a terrain of influence and power and traditionally it has been a more inaccessible territory for women. For a long time women were left out of the spaces where ideas were gestated: chairs, academies, political life. Perhaps intellectual prestige is the last redoubt, but I am hopeful that the spaces from which to think about our time are widening. There are still ways to open up, but I feel that prejudices are opening, “he says with more doses of hope. He also mentions the increased attention to the voices of women essayists such as Joan Didion, Siri Hustvedt, Susan Orlean, Renata Adler, Valeria Luiselli.

In this sense, she agrees with Blanca Cambronero, editor of Capitán Swing, who observes how today the number of women writing non-fiction has increased. “But I think that women have not had the space or recognition to dare to create more,” she says. It confirms that it receives more manuscripts from authors, in part because they have more security for the endorsement. The authors have not. He acknowledges that there are fewer Spanish authors in his catalog but they want to add more and more. The editor Blanca Rosa Roca, from Roca Editorial, finds no explanation but hardly receives non-fiction manuscripts from Spanish authors. “They hardly rule, but they are the ones we reprint the most. In fiction I receive many more, even, than men,” he says.

Blanca Cambronero finds the origin of inequality in the flawed operation of the Academy. Irene Vallejo has suffered from it. “I have paid a high price in precariousness and uncertainty for dedicating myself to care. The decision to take care of my father, seriously ill, and later my son, who was born with problems, prevented me from continuing with the academic and research career at the University It is a very widespread problem, “says Vallejo. In such a competitive world, Irene decided to brake to attend to the needs of others and was penalized. He believes that the commitment to people, to health, to the most vulnerable should not be punished. Explain that, having a child with difficulties, he could not have written Infinity in a reed without the help of your partner.

Akal’s editor, Tomás Rodríguez, has another figure: two out of every ten manuscripts he receives are from authors. “Years ago the ratio was even worse.” He says that, in addition, there are theoretical spaces in which the authors are more common (feminisms) and others in which “it is necessary to be proactive in the search for texts and authors.” Why is there so much inequality in the essay? “Of course it is not for the quality. My experience is clear in that sense,” he indicates. Like the rest of editors, he believes that it is due to a problem of representation and visibility. “There are women in the Academy, but not in higher ranks, who are precisely those who have more visibility and what is more important, more time and availability to face any writing. Keep in mind that disclosure or essays are not rewarded, nor the book format “, says Rodríguez

The editor talks about another delicate issue: the privilege of the consent. He says that there is a look that makes when a text arrives at a publishing house by an unknown author, one is less critical and demanding of it than it is with a female one. “That gaze is also present when you hear the opinion of a commentator or in debates on networks. It is a gaze that makes it more critical and less opportunities are given with a female voice (not a female voice). It is a preventive closure. Very similar to what could be cultural colonialism or a domain of cultural class, “says Tomás Rodríguez. For all that, he is blunt when he states that the number of visible authors is much lower than that of men.” A lot, “he remarks. It seems that this is not the case and that at the peak of visibility there is a certain parity but it is a mirage, a ruse “, Rodríguez ditch.