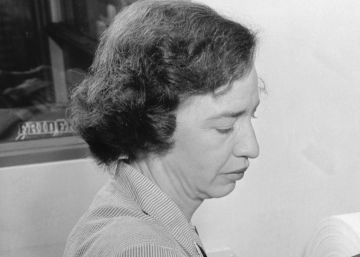 In April 1967, the American edition of the women's magazine Cosmopolitan public a report entitled "The computer girls." The photos were of a young IBM programmer surrounded by male engineers. "20 years ago [in 1947] a girl could be a secretary, teacher, perhaps librarian, social worker or nurse," the text said. "If I was really ambitious I could compete with men, often working more hours for less money. But now the great, fascinating computers and a new type of work for women have arrived: programming," he added.

Before the arrival of the personal computer, when computers were devices that occupied entire rooms, women were almost half of those employed in programming them. It was a special historical moment, with its characteristics and that lasted until the mid-80s, as the writer Clive Thompson recalls in his new book Programmers The creation of a new tribe and the recreation of the world, currently published only in English. "It is incredible how little is said about pioneer women," says Patricia Ordonez, associate professor of Informatics at the University of Puerto Rico Río Piedras.

Grace Hopper, one of the pioneers who helped create the first computer, said in Cosmopolitan, what to program is "how to prepare a dinner"

Why women dominated the beginning of software? Because it was a new sector and the prestige was in something close but different: the hardware. "One of the reasons why in the 60s men were not full-time programmers is because the sexy, rewarding part was the hardware", build computers, says Thompson. There was the money invested by the Government and the great intellectual difficulties. The programming was an intermediate point between the engineers and the secretaries: "The career programmers were not research staff, but served the research staff," Thompson writes.

Despite its weight, the cliches of the time were unbeatable. Grace Hopper, one of the pioneers who helped create the first programmable computer, the Eniac, said in the text of Cosmopolitan, what programming is "how to prepare a dinner". You had to plan "the details with patience," Hopper said, adding: "Women are made to program computers." It was not a rare comment for the time: a 1968 book on how to become a computer scientist suggested that whoever enjoyed "cooking from a cookbook" could have natural skills to program.

Also knowing how to sew was good to program, they said. The comparisons were with routine work and attention to detail. No one really knew exactly what programming was. The first compiler languages ​​- which translated something similar to our languages ​​into zeros and ones – had just been created. The women also had an added pedigree for having collaborated from key laboratories such as Eniac or Bletchley Park in the United Kingdom, which contributed to the Allied victory in World War II.

That mix of values ​​that made women consolidate as programmers reached its peak, according to Thompson, in 1984. At the beginning of that year 37.1% of computer students in the United States were women. From there, the fall. In 2012, the percentage was around The 17%. The data is more shocking because in other careers, female students have increased since the 1960s. In medicine or law they are around 50% since the beginning that did not reach 10%.

The three reasons for the disappearance

What happened for women to disappear from computer science or for men to massively move them? Three things, according to Thompson. One, software was increasingly important and companies were beginning to appoint managers with that training. One thing was to introduce programmers to type, another was to make directives.

Two, the arrival of personal computers in homes. Teenagers could mess with their Commodore 64 from a young age and parents used to give the device to the child or at least put it in their room. According to a study on the gender difference of Jane Margolis of Carnegie Mellon University in the 1990s, parents were twice as likely to give a computer to a son as a daughter. And it was easier to get into the race with previous knowledge of computers, although subsequent research has dismantled the idea that hackers Teenagers are better graduates in computer science.

Not only that. "That irruption was accompanied by videogames with quite simple but engaging narratives and that made the computer image begin to popularize as a geek, an asocial being that was not related to anything except his machine, which is a stereotype that did not it works among women, "explains Paloma Díaz, a professor in the Department of Informatics at the Carlos III University.

"When a new profession becomes stable, its status goes up, there is more money and men push women out"

That model of the geek computer set and had consequences: "It began to value more the person who was molded as geek, who worked at all hours, regardless of his appearance or hygiene and was obsessed with the computer. They looked smart, heard and valued, and began to create a toxic environment that repelled those who were different. That environment continues and creates a culture of exclusion, "Ordóñez believes.

And three, the arrival of money. "As sociologists have shown long ago," Thompson writes, "when a sector is getting better paid and prominent, the men who had despised it rush to enter."

This is how Diane Greene, former CEO of Google Cloud, recalled, in a recent conversation with THE COUNTRY, the years of change in 1985: "My class at the University of Berkeley was full of women. We were 30%. Everyone invented and nobody knew if you were a woman or a man. We just did that new thing together. Then, one day I found myself on a plane, I asked [the activist] Gloria Steinman what was going on, why it was so difficult now to women, why there was so much gender discrimination. He replied: "It is very obvious. When a new profession becomes stable, its status goes up, there is more money and men push women out."

Despite the differences between the initial computer development with the United States, in Spain the percentages among computer students are similar. In 1985, 30% of computer students in Spain were women. In 2016 they fell to 12%, according to data from a investigation by Juan Julián Merelo and Cecilia Merelo.

In another work by these two authors, they detected that "there is an inflection point around the 10 years in which girls cease to have an interest in Computer Science as a professional career. "This perception problem, which did not exist at the beginning of programming because it was a trade without a past, is key now:" When a An important part of the more qualified labor market requires programming and computer skills, which a part of the population excludes itself for subjective reasons, is a problem. That we lose part of the talent for a wrong perception of this profession, is a problem, "explains Diaz." You have to show the girls that it is a professional career, with large, medium and small figures, and especially with a large market labor."

Xiaomi launches the Mi 10, to compete with the most powerful phones on the market

WhatsApp use grows 76% in Spain due to coronavirus