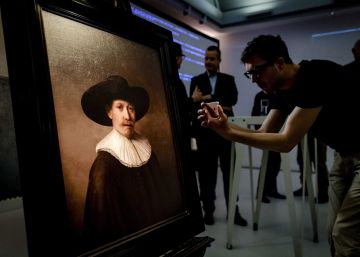 A few weeks ago, a court in China granted an article created by a machine operated by artificial intelligence the same copyright as if it had been written by a person. For this reason, he decided to fine a company for using the text without authorization. According to the sentence, the logical structure and the original style of the text made it protectable through copyright.

It is not the only case of an artist robot. In 2016, a story entitled The day a computer writes a novel, written by software, was close to winning the first prize of a literary contest in Japan. The same year, a group of researchers and museums from the Netherlands presented The new Rembrandt, an unpublished portrait painted by a computer capable of perfectly imitating the style and chiaroscuro of the Baroque master.

Until now, the creative activity of the machines had not raised problems because it was used to support the work of a human. However, to the extent that they have learned to develop as complex as artistic works for themselves, there are endless legal questions. Who is the author: the robot or the human who controls it? Should the painting or the text be protected? What to do if someone imitates it?

Today, almost all countries only recognize humans as authors. In Spain, the law of intellectual property He speaks of the “natural person who creates a literary, artistic or scientific work.” Therefore, at least for now, a robot cannot hold the rights inherent in a creation. However, the acceleration of artificial intelligence requires addressing a very complex legal issue with numerous economic implications.

The first step, according to the experts consulted, is to assume that it is probably not enough to retouch the law, but that a change of approach will be required. “We will have to rethink some axioms, such as that the author or inventor of a work can only be a natural person,” says José Carlos Erdozain, advisor of Pons IP. Actually, he explains, it is another step in the natural evolution of law: no one in ancient Rome would have imagined that an abstract entity, such as a legal entity, could have rights such as property or honor. Today is an indisputable reality.

Just need someone to take the first step, says Erdozain. Now there is a legal vacuum, but “in five or ten years some country may dare to regulate it” or there is a draft international agreement that serves as a basis for recognizing some copyright or invention rights to artificial intelligence.

Less futuristic is Álvaro Ramos, director of New Technologies at ClarkeModet, for whom robotic autonomy is still science fiction. For now, he defends, “copyright is for computer developers” because “there is always the human factor.” Thus, for example, after the program that was able to paint Rembrandt’s portrait is the hand of the man who taught him to imitate his painting.

Recognizing the authorship of the machine, in any case, would open a wide range of practical problems that are difficult to solve. Whose economic benefit would it be? Who can report their plagiarism? Is it possible to sell the work without the authorization of the software? For Ramos, a robot can generate rights, “but always in favor of who has programmed it.” Something similar to what happened to the famous case of the selfi taken by a monkey, which caused a legal dispute over whether the ape should benefit from its authorship, he explains. In that case the judges ruled in favor of the photographer because it was he who had generated confidence in the animal to take the snapshot.

Beyond who should be the owner of the rights over the works developed by artificial intelligence, in which all those consulted agree on the need to protect them so as not to discourage investment in these technologies. And, for the moment, in this aspect there is a solution in the legal system. For Ignacio Valdelomar, director of the legal advice of Isern Patentes y Marcas, “there is no doubt that creations are protected” and that they belong to the owner or designer of the software, a computer program that can be patented. It will be, therefore, who has the capacity to exploit it and perceives the economic benefits generated by what it produces.

What happens is that, at the rate that technology advances, Valdelomar does not rule out that, in the not too distant future, the robot becomes independent and has the capacity to create its own works without the need for its programmer to intervene. An issue that is “still green”, but is already being studied how it should be addressed. In the end, the lawyer settled, “technology is going at a speed of vertigo, and the laws and lawyers have to put the batteries.”

Although the legislation has not yet incorporated concrete solutions in the field of copyright, governments and international organizations are taking the matter seriously, developing proposals and drafts. No one wants to be left behind in the digital age. The World Intellectual Property Organization (WIPO), for example, studies options such as attributing authorship to the human creator, granting legal personality to artificial intelligence or establishing a special system for these cases. From Europe, also very active in the matter, a nuance is added: the need to preserve ethics in everything related to the application of these new technologies.

One of the legal solutions that have been raised to solve the problems that may arise in a future in which humans interact with intelligent robots is the creation of a third personality. Just as men and women (natural persons) and organizations (legal persons) have recognized, some theorists are committed to developing electronic people. An idea embraced by the Europarliament, which, in February 2017, approved a resolution that advocated giving this treatment to the androids when they make “intelligent autonomous decisions or interact independently”. Thus, for example, they could be responsible for repairing the damages caused by their activity.