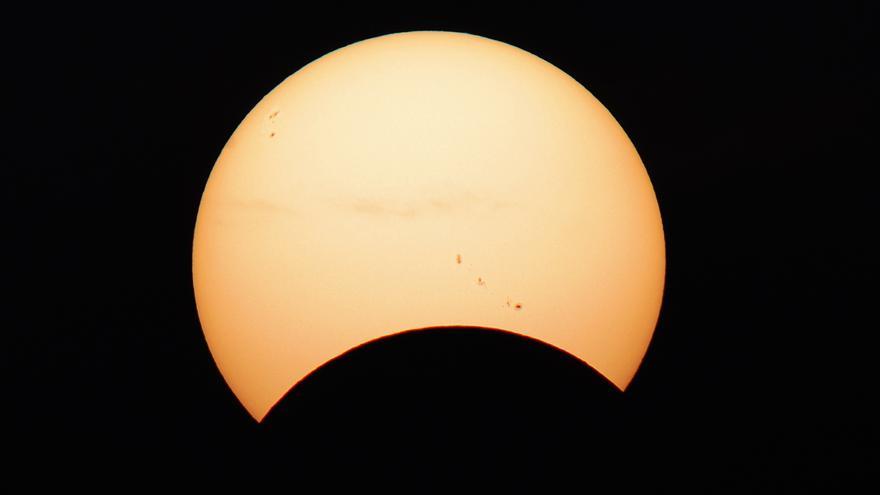 The annular eclipse of the Sun next Wednesday, June 10, can be seen from Spain as partial, according to the National Geographic Institute (IGN), an organism dependent on the Ministry of Transport, Mobility and Urban Agenda.

The partial eclipse will be visible in northern North America, Europe and Asia. It will start in the Atlantic Ocean, at a latitude of 23º, and will end southeast of Kumul, in the Xinjiang autonomous region (China). The total duration of the phenomenon will be 299 minutes (almost 5 hours).

The annulment phase of the eclipse will begin north of Thunder Bay (Canada), will cross Canada through the provinces of Ontario and Quebec, continuing through the islands of Baffin and Ellesmere, in the autonomous territory of Nunavut; It will enter northern Greenland (Denmark), cross the Arctic and finally enter Russia through the Far Eastern federal district. The eclipse will end east of Seimchan (Russia). The total duration of the whole will be 104 minutes (slightly less than 1 hour and three quarters).

The maximum of the annular eclipse will be at 12:42 pm (official peninsular time) at a latitude of 61º and a longitude of 67º west., on the Kenedy Channel, between Ellesmere Island and Greenland. The maximum duration of the totality will be 3 minutes and 51 seconds and the width of the shadow at that moment will be more than 500 kilometers. In Attawapiskat (Canada), the duration of the annulment will be 3 minutes and 29 seconds, in Pituffik (Denmark) 3 minutes and 49 seconds and in Seimchan (Russia) 2 minutes and 45 seconds.

In Spain, the eclipse will be seen as partial. It will have a magnitude (fraction of the solar diameter hidden by the Moon) of 0.2 on the northwest coast (A Coruña), around 0.1 in the interior and northeast of the peninsula, and around 0.02 or somewhat higher in the southeast, in the Balearic Islands and in the Canary Islands.

What is a solar eclipse and why does it occur?

From the observer's point of view, eclipses of the Sun are classified into: total, annular and partial. Such an observer will say that he has seen a total eclipse when he sees the Moon completely cover the disk of the Sun. However, another observer located hundreds of kilometers further north or south than the first will see the Moon cover only part of the Sun, so that for him the eclipse will be partial. There are times when the Moon does not completely cover the Sun from any point on Earth, so for all observers the eclipse is partial.

Another common type of eclipse is the annular eclipse. These occur when the observer sees that the disk of the Moon does not cover the disk of the Sun, although its centers are well aligned. This is because the Moon is farther from Earth that day than in the case of a total eclipse, so that its disk looks smaller than that of the Sun. In this case, a bright ring is observed surrounding the lunar disk.

In practice, the number of eclipses that occur each year is between 4 and 7, including those of Sun and Moon. In many cases the eclipses are partial (or even penumbral only in those of the Moon), and visible from a fraction of the Earth's surface. When the Moon is close to the Sun in the sky, the phase is a new moon, and there is the possibility of an eclipse of the Sun. When the Moon is in the opposite direction to the Sun (visible all night), the phase is moon full, and there is the possibility of a lunar eclipse.

As the IGN recalls, the last visible partial solar eclipse in Spain took place on August 21, 2017, although in poor condition at sunset. The next one will be seen on October 25, 2022, in the northeast of the Peninsula and the Balearic Islands.

The next total visible solar eclipse in Spain will take place on August 12, 2026, followed by another on August 2 of the following year. Shortly after, on January 26, 2028, an annular eclipse can be seen in Spain.

Tags: eclipse, next, place, sun, will have