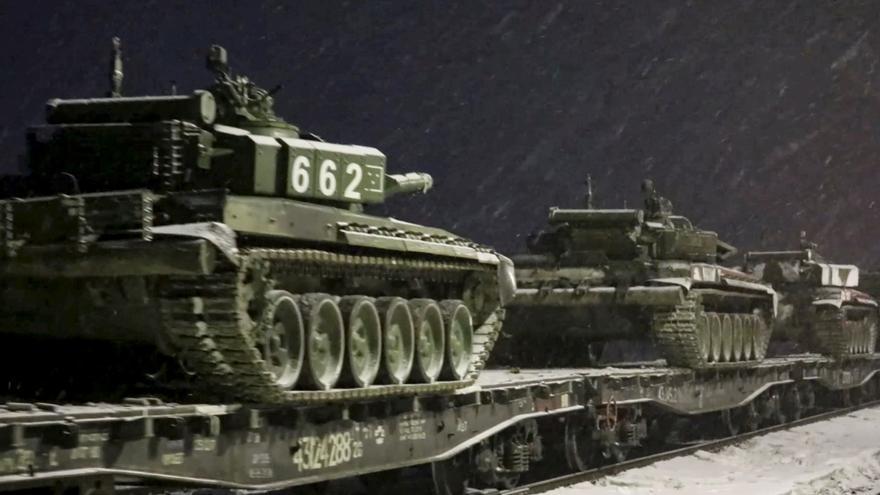 For November 7, 1983, in the midst of the Cold War between the Soviet Union and the United States, NATO had scheduled the simulation of a large military exercise with the code name Able Arche (the Skillful Archer).

They assumed the worst possible scenario.

- Then the United States responded with a massive nuclear attack.

An ancient drill wiped Kiev off the face of the earth

Interestingly, in the Able Arche simulation, the first city wiped off the face of the Earth by a thermonuclear bomb was Kiev, the current capital of Ukraine. Luckily, it was just a simple drill. But at the head of the Soviet Union was a paranoid: Yuri Andropov, former head of the KGB and the man whom Vladimir Putin considers his master. Andropov never believed that Able Arche was just a simulacrum. He was convinced that the United States was going to wipe the Soviet Union off the map by nuclear attack. And he ordered to prepare the Soviet intercontinental ballistic missiles for an immediate massive attack against the West.

The world was about to be destroyed.

His way of doing this was through the Strategic Defense Initiative, which in its time came to be known as "Star Wars." And the goal was to build a sophisticated weapons system, including laser weapons, located on satellites orbiting the Earth. They were determined that he would be able to prevent any nuclear attack the Soviets might launch against US territory.

- Either by missiles launched from nuclear submarines.

On March 23, 1983, President Reagan announced with great fanfare his Strategic Defense Initiative. When it was finished, the United States could attack the Soviet Union without fear of retaliation from the Communists.

Immediately Yuri Andropov gathered his nuclear scientists. The conclusion was devastating. The Soviet Union did not have the technological or economic capacity to do anything like the American Strategic Defense Initiative. So Andropov had only one way out: Attack the United States with all his nuclear weapons before Reagan's project was finished. An invitation to the end of the world.

Probably the smartest man in mankind

Both in theoretical aspects:

- Designed the implosion lens that allowed Trinity to be built, the first atomic bomb in history

- As well as the first and most important supercomputer of humanity, the famous JOHNNIAC (JOHN vNeumann. Numerical Iintegrator and TOautomatic Ccomputer).

A supercomputer that worked continuously for more than 50,000 hours, from 1953 to 1966. And in that time it allowed solving extremely complex mathematical problems, predicting the weather, calculating the trajectories of the first space rockets... And designing, to a large extent, the strategy that President John Fitzgerald Kennedy continued to clash with Soviet leader Nikita Khrushchev during the Cuban Missile Crisis.

John von Newman thought that the most dangerous part of the Cold War between the Soviet Union and the United States would occur at the beginning, paradoxically while there were very few nuclear weapons. Then the temptation to use them against the enemy would be very great. But Von Newman believed that before long nuclear weapons would proliferate in such numbers that if used they could destroy the Earth. And then a peculiar situation would have been reached: Mutual Assured Destruction. In that case neither the United States nor the Soviet Union could win a nuclear war. There would be enough atomic weapons to destroy the entire Earth if they were used, so no one could win a war.

In reality, towards the end of the 50s of the last century, we lived in a situation where the nuclear arsenals of the United States and the Soviet Union had the capacity to totally destroy the world many times over. For John von Newman a definitive peace had been reached. With the strategy of mutually assured destruction no one could win a war anymore. And for more than 25 years the world lived in the enforced peace of mutually assured destruction. Then it occurred to Ronald Reagan and his advisers that a new technological advantage like the Strategic Defense Initiative might enable him to win the war against the Soviet Union. But he was wrong.

The warning of nuclear winter

In the early 1980s, University of California at Berkeley scientists Luis Walter Álvarez, Helen Michel, and Frank Asaro discovered that around the world, right on the boundary between Cretaceous and Tertiary strata, 65 million years ago years, there was a thin layer of Iridium. This element is extremely rare on Earth, but very common in asteroids. Álvarez and his colleagues argued that the iridium layer came from the impact of an asteroid on Earth. And the place of the impact of the asteroid was found in the Chicxulub crater of the Yucatan, in Mexico. Just after the impact of that asteroid, more than half of the species of plants and animals that inhabited the Earth, including all the dinosaurs, became extinct practically at once. But the explosion was not the only problem.

The asteroid impact sent millions of tons of dust and soot into the atmosphere. And that blocked out sunlight for decades. The plants were unable to photosynthesize. The herbivores died from lack of food and then the carnivores. The world entered an extreme ice age. Some organisms survived such dire situations. For example, some small mammals similar to mice and voles survived in the soil by eating seeds and roots. The seeds of plants and the resistant spores of microorganisms held out for decades, until dust and soot stopped darkening the atmosphere. Little by little life revived after the apocalyptic catastrophe.

Then a series of atmospheric scientists sounded the alarm. Paul Crutzen, John Birks, Owen Toon, Richard P. Turco, and Carl Sagan in North America, and Vladimir Aleksandrov and Georgi Stenchikov in the Soviet Union made a decisive discovery. They discovered that the smoke from the fires and the dust that would be released into the atmosphere in a nuclear confrontation, even if it were restricted and used only a small part of the Soviet and American arsenal, would be dire. They would block the Sun's light for years and produce a nuclear winter with consequences very similar to those that extinguished the dinosaurs. Humanity would not survive.

The politicians, this time yes, understood the scientists

Ronald Reagan understood that he could never defeat the Soviet Union. It would simply be enough for the USSR to detonate part of the nuclear warheads of its missiles in its own silos for the nuclear winter to destroy the world. Andropov couldn't win either. Thus, at the end of the 1980s, as a consequence of the threat of nuclear winter, and with the fundamental help of scientists, Ronald Reagan and Mikhail Gorbachev signed the nuclear disarmament treaties between the USSR and the USA.

Despite this reduction in weapons, both the United States and the Russian Federation still have enough nuclear weapons to unleash several times the nuclear winter that will extinguish humanity (and most of the species that live on the planet). Now, about to that Putin will invade Ukraine if someone doesn't fix it, the Doomsday Clock is barely 100 seconds to midnight. The Doomsday Clock is a symbolic clock that began to work in 1947. It was the beginning of the Cold War and was born at the request of the board of directors of the Bulletin of Atomic Scientists, an institution made up mostly of Nobel Prize winners.

In the Doomsday Clock midnight represents the destruction of Humanity by a nuclear conflict. Only in very few moments in the past, like during the Cuban Missile Crisis between Kennedy and Khrushchev, or during the Able Arche drill, was the Doomsday Clock so close to the fateful hour. On the verge of an armed conflict in Ukraine, many scientists are confident that John von Neumann's hypothesis is still valid. Because if so, Mutual Assured Destruction will prevent an atomic confrontation that triggers nuclear winter. But we cannot forget that John von Neumann, in addition to being a great genius, was known by the nickname of Juanito el Vividor. His excessive passion for women, parties, friends, adventure and science made him, according to his friends, "the human being who enjoyed life the most".

Could John von Neumann's inordinate passion for life make him mistakenly believe that no one will unleash a conflict that cannot be overcome and that can only lead to death?

Professor of Genetics at the UCM.

ACADEMIC CORRESPONDENT OF THE ROYAL NATIONAL ACADEMY OF PHARMACY