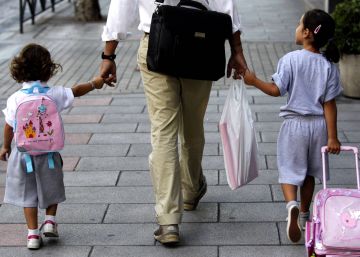 The shared custody regime implies, on the one hand, an equal rights and obligations of the parents with respect to the minor, but also the need for an agreement between them that alters as little as possible the development of the life of the common child. In fact, in a 2014 ruling the Supreme Court (access here to the text) has already established as a requirement to establish joint custody “the need for a relationship of mutual respect between the parents that allows the adoption of attitudes and behaviors that benefit the minor, that do not disturb their emotional development and that despite the breakdown affective of the parents maintain a familiar frame of reference that sustains a harmonic growth of their personality “. The best interests of the minor, therefore, is the fundamental element that determines the most appropriate regime when a custody case reaches the courts.

This concept defined in Organic Law 8/2015 of July 22, translates into preserving the maintenance of the minor’s family relationships, protecting the satisfaction of their basic needs – both material, physical and educational as well as emotional and affective-, weighing the irreversible effect of the passage of time in its development or to ensure the need for stability of the measures that are adopted and that no more rights are restricted or limited than those protected by them.

In this sense, the distance between the domiciles of both parents plays a determining role, sometimes becoming the main or even the only argument to deny joint custody. As the jurisprudence of the Supreme Court points out, “a considerable distance between the parents’ homes makes the adoption of the joint custody system unfeasible, given the distortion and alterations that it may cause in the minor’s life regime”, especially if they are of age school. But the assessment of this distance is not only a matter of kilometers, the time between transfers, the communication network between homes or the insularity also influence.

The time between trips

The duration of the transfers may determine the custody regime, although the distances between the parents’ residences are not excessively great. For example, the Provincial Court of Barcelona in a judgment of July 2020 (access the text here), denied joint custody despite acknowledging that the distance between the father’s home and the mother’s was not important, because he considered that it “made it difficult to move daily and to practice extracurricular activities.”

In the opposite direction, the Provincial Court of Vizcaya ruled, recognizing in a 2019 sentence (access here to the text) that the inconvenience of investing more time in transfers to go to school “cannot be comparable to the damage that can be caused to the minor by her removal from a stable and continuous relationship with her mother.

In another case, this time resolved by the Malaga Provincial Court (access here to the text of the sentence), the time used in the displacements did not imply withdrawing joint custody either, but it did imply a modification of the agreement between the parents regarding the day on which the minors were transferred. The distance between the maternal and paternal homes was barely 39 km by highway, but the journey used to last several hours since it occurred on Sunday afternoons coinciding with the return from the beach for many.

One option to solve the distance between the parents’ places of residence is to educate the minor in an educational center located in a town that is midway between the two homes. This was the solution agreed in a case that reached the Provincial Court of Vizcaya (access the text here) in order to maintain joint custody despite the fact that the mother had moved 60 kilometers from where the father of the daughter lived together.

The fact that the parents reside in different localities does not prevent joint custody from being admitted as long as “the distance between them allows the execution of said regime.” This was pointed out by the Córdoba Provincial Court, in a case in which the mother had to reside with the mother for work reasons 30 kilometers away from the home of the father of the minors. The court underlined in its judgment (access the text here) that there was a highway that allowed the distance between the two towns to be covered quickly, and considered it acceptable that “the journey from the city where the father lived to the school for the minors lasted slightly longer than a urban route that would imply crossing the city center or the roads with the greatest traffic intensity ”.

This good communication between towns is much more complicated between islands where transfers cannot be made by road. Therefore, in a judgment of July 2020, the Provincial Court of Santa Cruz de Tenerife (access the text here) established that insularity, given that the minor lived with his mother on the island of La Palma and his father on Fuerteventura, prevented the adoption of joint custody.

Separation from siblings only in exceptional cases

Nor was it possible to adopt the joint custody regime due to the distance between the parents’ homes, in a case in which the Valencia Provincial Court made an unusual decision: the separation of the siblings (access here to the text of the judgment). So the 8-year-old son stayed with the father and the 3-year-old daughter with the mother. Although the court admitted that what is recommended in the Civil Code is that the siblings stay together, it justified its ruling by relying on the expert report that advised their separation on the grounds of “the different age and stage of growth in which the children are, who it makes them have different ties to the parental environment ”.