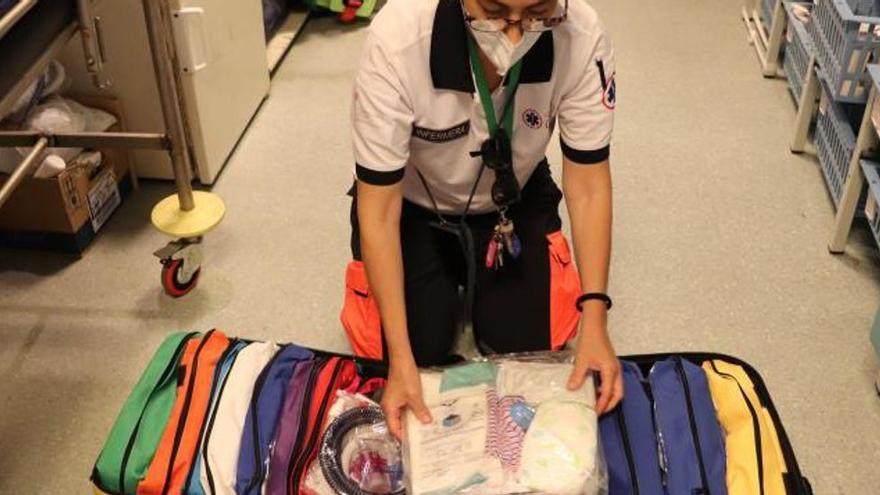 "The most important thing at that time is to transmit calm and tranquility, that they know that you will be by their side at all times, that they will not be alone", says Aparicio, who highlights that, in the case of Ibiza, one of the Advantages in these cases is that the distances are short and the ambulance with health care to attend to the woman and the baby arrives quite quickly.

The first step, he explains, is that the person who meets the woman - "they are almost always accompanied" - details in what situation the childbirth is. How are the contractions going or if the head is already visible, as happened in the case attended yesterday. In that first moment, it is also necessary to make sure that it is not a risky delivery, such as that the child came from the breech or that there was a placenta previa. "In that case, it would be necessary to run a lot to get to the hospital," says the nurse, who assures that, luckily, this is not the case for most births that have to attend by phone.

The same assures the head of Gynecology of the Ibiza and Formentera Health Area, Rodolfo Moreno: "All the cases that I remember have ended well." Of particular note is the specific training that 061 staff receives on childbirth care. In fact, in the ambulance, in the pediatric support suitcase, there is a red bag with the essentials for the first care of the mother and the baby. The head of the service details that in most cases these are "hasty deliveries": "They occur in less than four hours and usually go well." Many of the women have been mothers before and have a higher pain threshold than usual, so they feel less contractions and when they are aware that they are in labor they no longer have time to get to the hospital, so They only have to call 061.

"We are indicating to them how to proceed, although the normal thing is that the baby is born relatively alone", indicates Aparicio. "It is explained that they do not have to stretch, they simply accompany the baby in each contraction," says the nurse, who continues: "When the baby has already been born we tell him to put it skin to skin with the mother and not to cut the umbilical cord ". They also ask that, even if they are in a warm area, they keep the newborn and the mother "covered" while the ambulance arrives. "It always comes", says Aparicio, who explains that to try to "relieve tension" in those complicated moments they ask if it is a boy or a girl, if it is the first or not, what they plan to call it ...

The thing to prepare hot water, a recurring scene of out-of-hospital births in series and movies "is not necessary", although it is useful for cleaning. What is essential is clean clothes. Not only so that the baby and the mother do not get cold but also, and very important! to receive the newborn in the safest way possible: "They are born with a little fat that can make it slip from your hands".

While the ambulance races to arrive as soon as possible, the hospital prepares to care for mother and baby. "A low Maternity midwife, on the third floor, in the ER, on the first floor, awaits them at the door, with a small set to attend to them," explains Moreno, who details that the first thing to do is check the tension of the woman, who has a contracted uterus, who has delivered the placenta and if there are tears in the birth canal. This, he indicates, is usually common in these deliveries, since they occur so quickly that there is no time for it to mold. In the case of the newborn, they make sure that he is well and only if necessary is a pediatrician notified.

Aparicio confesses that the tranquility for everyone, those who are at home and who assists them on the other end of the phone, comes with the baby crying: "The relief you feel is directly proportional to how hard he cries." The last born at home in Ibiza did not give any scare in that sense since, according to the health workers who attended him, "he cried hard at birth".