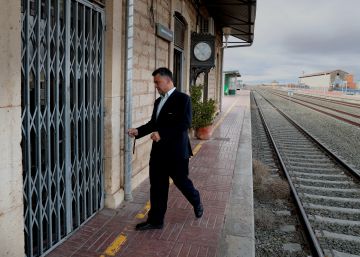 Ghost train stops and abandoned terraces mark the landscape of the Sanabria Valley. This region of Castilla y León, located 100 kilometers northwest of Zamora, received this year’s news closing of the last point of sale of train tickets What stay. Since that day the box office at the Puebla de Sanabria station has remained with the blind down, the heating in the waiting room turned off despite the low temperatures and the closed bathrooms. A small sign, unnoticed in one of the doors that connect to the platform, offered a telephone number as an alternative to purchase tickets. No sign of the self-selling machine that Renfe promised instead. The company’s motive: its low use.

“It’s not just the train,” explains Raúl Barrado, mayor of Malpartida de Plasencia, an Extremaduran town of 4,000 inhabitants that was also affected, like another hundred municipalities. “We must add the closure of bank offices, health centers, clothing stores, food …”. Businesses that are extinguished faster than their users in the face of falling customers or reduced to a digital service to reduce costs, as Renfe proposed. “People are running out of another alternative than leaving here,” Barrado laments.

Like the sale of tickets, the digital option has also gained weight in the banking world due to the continuous closure of ATMs – six offices per day in the third quarter of 2019 – which in 2017 had already left more than 1.2 million of Spaniards without a bank in their town. In the absence of more updated data, everything indicates that this figure has increased. More than 20,000 branches have disappeared since 2008, and more than half of the municipalities in Spain have neither bank offices nor ATMs, according to the Bank of Spain.

The mobile phone has become the basic tool for managing accounts in these places, but the digital divide makes it a useless resource for an aging population with no resources to learn. “We have been fighting for years to visualize that this is a widespread problem,” says Estefanía de Régil, one of the founders of emancipatic, a non-profit association dedicated to instructing adults in the use of new technologies. “There are many people over 60 who only know how to use the mobile phone to call and send whatsapps. Others have no smartphones and nobody teaches them how to use these devices, ”he says from his experience. “It happens in big cities too, although it is more frequent in rural populations, where services are lacking and where the digital alternative is not an option, it is that they have no choice.”

Adif began restoring the face-to-face sale on Wednesday in the hundred stations that, like Puebla, lost service with the beginning of the year, given the multiple complaints of platforms, unions and mayors of the affected municipalities. This rectification, in fact, became one of the key requirements for the formation of the new Government, after the deputy of Teruel There, Tomás Guitarte, take this condition to the then presidential candidate Pedro Sánchez. “It is a demand for all of Spain, not only for Teruel. The train is an essential service and spreads very impoverished and aged regions of the country, ”says the party, which has requested that an impact study be carried out and an alternative is sought.

However, the service will continue “for six months,” according to Adif, until Renfe finishes adapt to train privatization. The company, the only operator of the roads until in December the French SNFC and the Italian Trenitalia-Isla disembark, already warned that it will eliminate the face-to-face sale at the stops with less than 100 daily travelers, transferring it to Correos, where in many locations it opens only An hour in the morning.

Juan Eugenio Mena, Extremadura from the platform in defense of the Ruta de la Plata Train, says that the closure did not surprise him: “With the excuse that we are not profitable, they only cut services and needs to the most disadvantaged. A skinny dog, everything is fleas. ”

One in four inhabitants of the province of Zamora does not have a bank branch in its location. In that area, the lowest rate of access to cash in Spain coincides with the oldest population in the country, with an average age of 50.7 years, according to the INE. Managing your account from your mobile or making purchases online can become an odyssey in this region.

“The Internet here is African,” sums up the mayor of Lubián, Felipe Lubián Lubián, whose last names denote their origin in this Zamora population of Alta Sanabria. While most of Spain is about to enter the 5G era, the connection barely reaches its localities. The data of the shops fail and many hoteliers cannot even offer reservations on-line. Even so, its town has been one of the most fortunate: at least the branch that remains open once a week, although the network causes continuous failures that render operations useless. In the same region, the town of Otero de Bodas has not had telephone coverage for a month and a half. The digital alternative, directly, does not exist.

The closure of bank branches has been followed by the disappearance of all types of businesses. Almost 1.5 million people live in municipalities where there are no supermarkets. Most, according to data from COWS, the supermarket employer, lives in villages that do not reach 330 inhabitants and where one in three is over 65 years old.

The Asturian village of Carrandi is one of these examples. Gabriel Sakc of Cyber ​​Volunteers, arrived in this old mining town belonging to the council of Colunga last November as part of the project of Expertclick, supported by the Spanish Banking Association to fight the digital divide.

In this small mountain town there are no stores, gas stations, or pharmacies. Even the service of Mass has disappeared. The buses run only once a week and the Internet connection works well only in the social center, created recently by the neighbors and where almost all the activity of the town is concentrated. “For these types of populations, which are very isolated and their inhabitants have a high dependence, learning to use the Internet is essential. Many have trouble moving around, and knowing how to use their cell phones to request medical appointments or access their pension is vital. The problem is that most don’t know how. ”Sakc says.

Although the Internet is offered as an alternative for areas that begin to lack physical services, the digital option sometimes also encourages the disappearance of proximity businesses, increasingly scarce in rural Spain.

Carlos Mato, was born in the same shoe store that he runs today, the only one left in Puebla de Sanabria. A century-old trade that has passed from generation to generation. But now, the local accounts are going downhill. Electronic commerce sinks their business and customers are scarce. “People buy more online and, above all, in the surrounding villages, where if you want anything you have to take the car,” says the clerk. Their problem, which share a good part of small and medium-sized businesses, as the Spanish Confederation of Commerce has warned on several occasions, is accentuated by the loss of customers involved in the demographic bleeding of rural areas.

A few meters from the shoe store, Teresa Escudero, 50, works with her husband in the appliance store. He refuses to buy online. “It’s throwing stones on your own roof. The other day I saw Amazon’s data: 500 million orders this Christmas, but they barely pay taxes. And we, 21% every month. They are leading us to ruin, ”he cries enraged. The last clothing store in Puebla de Sanabria has already placed the closing clearance sign. For its owner, Jesús Centeno, 50, closing this family business “is a pain of the heart.” Ten years ago his trade began to plummet: “First the depopulation and now, above, the sale on the Internet… ”