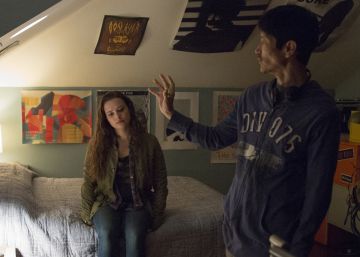 "It is tremendous to convert the consumer or certain sectors of that consumer public into a kind of censorship office, which can set off alarms for any matter. Although in some cases the political correctness is positive in the sense that it reflects a greater sensitivity towards sectors that have been either invisible or underestimated. Collectively we have gained another kind of sensitivity or self-consciousness and suddenly the alarm goes off, "explains journalist and writer Jordi Costa.

Costa also warns of the danger of linking fiction with reality: "Establishing cause and effect relationships with fiction is very problematic and we can not tend towards a future of absolutely aseptic fictions that do not bother or offend anyone, because one of the functions of art it's precisely asking uncomfortable questions. "

Content has been changed for all kinds of reasons. After 9/11, numerous films and series had to alter or eliminate sequences before their release to avoid references to the attacks and the fall of the twin towers. In cinema, it happened in Armageddon, Spiderman, Men in Black 2; on television, in Friends, the credit titles of The Sopranos or those of Sex in New York. "In the US there is a television museum and it would be good to document it when the change has taken place and why, because the history of censorship is also the history of culture. The moment in which censorship goes from being an administrative body to being something in which the user can intervene, I think that says a lot of the moment, "says the journalist.

The one in the Netflix series is not the only change that has been seen this year. HBO retouched recent sequences of Game of Thrones because contemporary elements appeared like a paper cup from a coffee shop and a plastic water bottle. The digital erasure was done in silence, without advertising. Although this time, that coffee will be forever recorded in dozens of memes that flooded the networks shortly after detecting the failure. In cases like these, the alteration suffers an error, as with the edition of books. But in content times by streaming, it is impossible to accumulate editions.

At the end of this year, Disney releases its digital platform with which it will face Netflix, Amazon, HBO. The content he will offer will include many of his historical films. One of them will be Dumbo The film, from 1941, includes a character named Jim Crow, which was based on a famous white actor who painted his face black and played black characters. The term Jim Crow ended up being considered contemptuous later and Disney decided to correct any racist connotation by eliminating the character as much as possible. Dumbo It is also in the historical archive of the Congress since 2017, which will allow, when there are few possibilities of seeing the original version, to appreciate in perspective the cultural moment of the forties in comparison with the current one.

"You can not turn the world of fiction and art into a kind of open bar in which any group suddenly blows up the alarms and the corporation, so as not to offend that sector, immediately correct what it has done. In this sense, platforms such as Netflix should protect the creator's discourse more, because if not, we are creating a new reality in which the most democratized are direct censor impulses or trying to regulate the discourse of others, "Costa concludes.