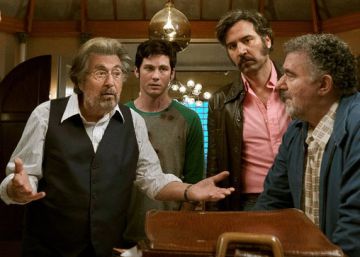 We abuse Nazism and the invocation of the spectra of Auschwitz, both in public conversation and in fictions. Mike Godwin patented the rhetorical law (and ironic, although many take it to the letter) that bears his name, according to which, the longer a political discussion lengthens, the more likely someone is to mention the Nazi word. In fiction, as in the new series of HBO with Al Pacino, Hunters, this banalization is expressed by the camp, that is, with a loud and harmless cartoon.

The continuous protests of the Auschwitz Memorial, which condemns all fictions that do not adhere to historical truth (and with Hunters they have work for a while) they join in the teasing of those who believe, like Godwin, that calling the ideological opponents Nazis is a rhetorical excess that disables any argument. And they are right.

Nazism and Auschwitz are banalized, but it is not due to a lack of awareness or to the very worrisome anti-Semitic outbreaks or to the deniers who retail in the extreme right, but rather the opposite: we appeal to Nazism because it is our moral horizon and the Ideological space from which we want to flee at all costs, and we fantasize about Auschwitz because it is no longer a place, but the contemporary idea of ​​hell in Western culture.

When we imagine Hades today, we can’t think of anything more terrible than a death camp. They say in the Auschwitz Memorial that there is no reason to fable because historical truth is more terrifying and unlikely than any fantasy, and it is so: we have not yet been able to honor with fiction what the documented facts reveal. That is why we will continue to use the word Nazi as an insult (because there is no worse one) and that is why we will continue caricaturing and going around the Auschwitz myth: because we care so much.

What to watch on television today? Joaquín Reyes will talk about dreams with Dani Rovira and José Sacristán will remember his parents on laSexta