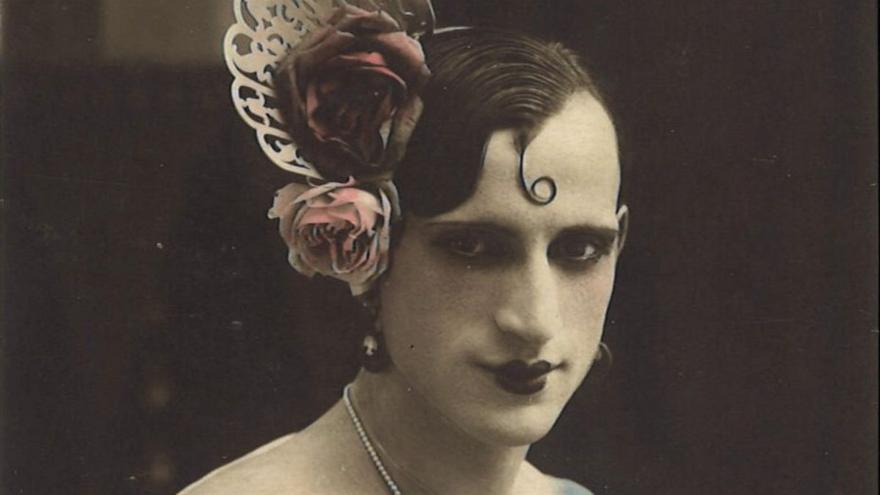 100 years ago, the same Madrid that housed the seat of the dictatorial government of Cousin of Rivera, gave shelter to a group of homosexual artists and creators who managed to live their sexual condition with a visibility inappropriate for the moral canons of the time. They triumphed with daring shows of transformism, they looked ambiguous and proud on the covers of magazines and newspapers, they published lubricious stories full of desire between people of the same sex and they walked through the streets of the city never hiding their difference.

The history of literature has told hairs and signs of the loves public and private figures such as García Lorca, Luis Cernuda or Vicente Aleixandre, who coincided in Madrid in the 1920s. However, in popular culture there are no references to other creators with whom these three poetry icons shared time and sensitivity in a city that lived the ‘happy twenties’ with an intensity and hedonism similar to those that were breathed in Paris, Berlin or New York.

Artists such as the Cartagena transformist Edmond de Bries, whose fame was so great that not even the queen Victoria Eugenia he wanted to miss the premiere of his show at the Fuencarral theater in September 1920, where he sang mischievous melodies covered in feathers, silks and rice powder. Or your friend the versatile creator Álvaro Retana, who always played sexual indefiniteness in his texts and poses, and who wrote for De Bries ‘Las afternoons at the Ritz’, a hit of the time whose chorus he repeated to the rhythm of cuplé: “What a pleasure it is to dance the fox-trot with a maiden that speaks to us of love ”. Or the painter and couturier Jose Zamora, who used to perfume the gatherings of Valle-Inclán and Gómez de la Serna with his mannerisms and feminine looks.

The account of the twentieth century in Spain usually frames the 1920s under the shadow of the dictatorship, the hangover of the flu pandemic and the war in Morocco, but he goes on tiptoe when referring to the moral and customs relaxation that was experienced in certain artistic and intellectual environments of cities such as Madrid and Barcelona. Now, an exhibition organized by the City Council of the capital has rescued from oblivion the happy moment of creative effervescence, modernity and sexual freedom that a group of gay creators whose works and life trajectories from those years would seem typical of a later century.

The exhibition ‘Cuestion de Ambiente’, which will be open to the public until the end of October, gathers in the space Center an assorted collection of photos, letters, drawings, charts, press clippings, and biographical reviews of a dozen characters that enriched the cultural life of Madrid in that decade without concealing their sexual condition.

Apart from those mentioned, the exhibition reviews the adventures and creations of figures such as the painter from La Mancha Gregorio Prieto, friend of Lorca, Cernuda and, above all, of Vicente Aleixandre, of whom he was a personal confidant without ever hiding his homosexuality; or the lesbian dancer Carmen ‘Tortola’ Valencia, an icon of the moment that is defined in the exhibition as “the most photographed woman in Spain at that time”; or Antonio de Hoyos, Marquis de Vinent, who wrote fast-paced novels that scandalized the well-thought-out minds of the time, despite which he boasted: “I plan to write whatever I want, work whatever I want, and have fun as much as I can.”

The painter Gregorio Prieto, with a friend.

They maintained close relationships between them and it was common to see them together in the Levante café, in Fornos or in the Henar Farm, where they always showed themselves naturally. “It was a generation ahead of its time who lived their homosexuality out of the closet,” he defines Joaquín García Martín, curator of the exhibition, which also features a collection of professional portraits of second-tier actors posing proudly Women dresses. “It is surprising to see the success that transformism had in those years and to what extent ambiguity was an element with which many artists of the time decided to play,” says the expert.

One hundred years later, the show aims to illuminate a part of popular culture that had stayed silenced, or at least without its right line in the story of the century. “It also aims to vindicate a group of artists who dared to live their sexual freedom in much more difficult times than now. They were the first modern in Spain ”, adds García Martín.