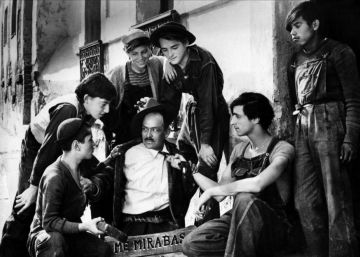 When Mario Vargas Llosa He began to grope The city and the dogs at a lonely table in the El Jute bar made him aware that he needed a structure marked by his faith in Sartre, his admiration for Faulkner and a Flaubertian discipline. This was explained in his 1997 prologue to what he considers the definitive edition of one of the Nobel Prize's top works. But what he was not so aware of in that Madrid tavern near the Retiro Park was that he would also use the influence of Luis Buñuel to build atmospheres and characters.

The filmmaker, on the other hand, must have recognized some breath of his own when reading it. And with time, Vargas Llosa also: "It's possible," he admitted in an interview published in the French magazine Positif in 1989. "It's a movie that I liked a lot. The universes are very similar. El Jaibo, a character from Los Olvidados, could well have been El Jaguar from my novel. " The cross between the director and the writer would have reached more than having prospered the desire of the first to adapt to the cinema The city and the dogs. For some time it was his intention and they entrusted it to him Carlos Fuentes and José Emilio Pacheco to the Spanish-Peruvian author, Vargas Llosa explains to EL PAÍS.

Writer and filmmaker met, briefly, in Paris. "I only saw it once in my life," says the Nobel. "I accompanied my former boss at Radio Francia Internacional, Jean Camp, to a hotel where Buñuel always stayed, near Montparnasse. It must be the year 1964 or 1965. I remember that he was saying goodbye in a very effusive way of Rafael Alberti. He knew Jean, he was the son of a Hispanist. " Also remember that Buñuel was very kind. "I did not see at any time that artist who systematically broke the conventions and standards, he was very affectionate with us. I was impressed by your cordiality, "adds Vargas Llosa in a telephone conversation. "He told very funny anecdotes, as in his films he tried to get some character who said he was willing to give in anything but one. And that one represented everything. "

The city and the dogs had been published by Seix Barral in 1963 and had received the Biblioteca Breve award in Barcelona one year before. Although Don Luis then gave no sign of having read it. "He did not tell me anything," says the author. "But years later, Carlos Fuentes told me he wanted to take her to the movies." Again, the Mexican writer established a bridge of the master with authors of the boom literary Latin American. He revealed it in a letter that dates from 1964 and is in his Princeton file, as indicated by Xavi Ayén in his book Those years of the boom: "Buñuel is crazy with the city and the dogs, although to take her to the cinema he sees problems of censorship almost insurmountable."

Among the tests that mark the relationship of Luis Buñuel with the Latin American Boom, there is not only evidence of the direct ones, also of the border ones. To the list of Carlos Fuentes, Gabriel García Márquez, Julio Cortázar, José Donoso and Mario Vargas Llosa, pure representatives of the literary movement, joins another of his most marked influences: Juan Rulfo. According to Javier Herrera, a student of Buñuel, the teacher valued getting involved in his work Pedro Paramo. "There is a copy in your file that is outlined and underlined so as to draw a script from it," says Herrera. Nothing more connected to the world of the filmmaker than the rumor of the dead that dyes the whole book of the Mexican author. A work recognized by García Márquez as a determining inspiration in its atmospheres and writings. The silent mystery of Rulfo's literature multiplied with the rich imagery he also explored as a photographer. Just thinking about the strength that Buñuel had printed to that universe with moving images multiplies the frustrations. Not only of both creators, especially those of us who could have enjoyed them as spectators.

That appreciation was a round trip: "We were all great fans of his cinema," says Vargas Llosa. "In my case, especially from the Mexican era. What he filmed in many cases during that period were melodramas, but he always managed to put something unusual in them, fantastic with what made them transcend and turn them into works of art. There was for us a magical realism recognizable in Buñuel, without a doubt, that leaves its mark in our novels. It is a fantastic and little explored nexus, "he adds.

Javier Herrera, expert in the filmmaker's work, he has studied it. Not so much with Vargas Llosa, but with other authors that Buñuel wanted to adapt. "The main reference comes almost always through Carlos Fuentes", explains Herrera. They were great friends and studied it in depth, which gives evidence in memoirs such as Diana or the solitary hunter and in recently recovered works such as La balsa de la medusa, Fuentes's monographic study about his cinema, discovered by Herrera and published in the Fundamental Work Collection of the Banco Santander Foundation in 2018.

Through Fuentes, the director shows interest in filming works by Julio Cortázar and José Donoso. The attraction was mutual. Buñuel was always a pure filmmaker, inventor of absolutely new ways. But for that he drank as much of literature as of painting and, above all, of his own inner world, full of ghosts and signs of the unconscious. His surrealism sown in the European avant-garde connected with the world that in the second part of the 20th century spurred the Latin American authors of the boom and came to be called magical realism.

But it was an interest plagued with frustrations. When García Márquez had not consecrated himself for the success of One hundred years of loneliness and he was still looking for his life as a columnist and film writer in Mexico, he dreamed of being adapted by the teacher and gave him a script entitled It's so easy that even men can. Buñuel barely paid attention to him.

Yes, he showed more interest, instead, Aura, of Sources or by The Maenads, story of Cortázar published in the volume End of game. For the Argentine author, that was a moral kick: "I never thought that I would be lucky enough to write him personally to tell him what his cinema has meant to the Argentines of my generation who once approached in their youth the pure wonder of The golden age and felt that all was not lost while there were poets like you, rebels like you, "Cortázar writes in a letter that is in the legacy of the Filmoteca Española and Herrera has rescued along with other documents in his book Buñuel y his file: "For all that, you are one of the few reasons why I am happy to have lived in this time. I'm telling you that, without turning, because I know you'll understand me. "

Also Donoso was in deals for The city without limits, a novel that would eventually lead to the cinema Arturo Ripstein, as a tribute to the first intention of his teacher. All this represents the documentary evidence of an artistic kinship whose wealth encompasses apparently remote worlds, but certainly close.