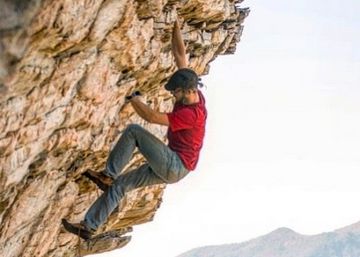 The echo of "Noooooo!"It bounced against the wall and was heard with an overwhelming sharpness. The climbers who prepared themselves at the base instinctively raised their eyes to see a body falling silently as if it were a scene projected in slow motion. There was no more screaming, just the silence of the acceptor and the noise of the impact: Austin Howell, 31, had just lost his life after suffering a fall of 25 meters when he was climbing ropeless in Shortoff Mountain (North Carolina, USA). It was the past June 30, and although this type of accidents are infrequent (very few climbers are able to do without the rope), it is the second in the last 10 months. On August 20, the Italian high mountain guide Philipp Angelo (36 years old) rushed to the void from a height of 600 meters when he climbed in single integral the Walker Spur of the Grandes Jorasses. Both climbers fell for the same reason: a grip broke in their hands.

Riley Collins, direct witness of Howell's accident, told the magazine Rock and Ice He could see how the grip broke: "He had only a few meters to finish the track. It was not his fault. I had prepared the route very well but the rock song gave way … "

A rope that was in the Walker below Angelo also said that he clearly heard the sound of the rock breaking. Immediately after, the body of the Italian passed in free fall a few meters …

Both climbers presented different motivations to dispense with rope safety. While Howell had become famous through his Instagram account Freesoloist and he devoted himself body and soul to climbing without rope mainly difficult sport climbing routes, Angelo was one of the best mountaineers of his generation, and he carried with extreme discretion his occasional flirtations with the only integral. Both agreed on one point: their search had nothing to do with the food of adrenaline. Conscious of the rejection that the integral one causes in the uninitiated public (and also in many climbers), and of a controversy that now revives with these deaths, Howell had written on his website: "Climbing, for me, has been a path towards peace. Climbing in integral solo correctly is not, in any way, a shot of adrenaline, but rather a feeling of control and serenity. If you do it for the adrenalin kick, you're an idiot and this will kill you. This is not about surviving an escalation, I want to own the way. "

Angelo maintained a close relationship with the north face of the Grandes Jorasses, one of the mountaineering temples and the place where he lost his life. In 2014 he fulfilled a dream by climbing the Polish route alone. Two years later, along with the Catalan Marc Toralles, he climbed the Manitua route, on the same wall, and in between climbed the Via Bonatti to the red pillar of the Brouillard or the Pilar Gervasutti in the neighboring Mont Blanc de Tacul.

The figure of Howell went viral in 2015, after hanging a video in which it exceeded a wall of a hundred meters climbing completely naked. No cat feet, no clothes, no magnesium bag … just your fetish hat. At the time of dismissing the use of the rope, climbers choose difficulties well below their capabilities, to preserve the greatest possible range of safety and control possible adversities. But nobody can know if a grip will break or not, and this is what really scares in this type of exercise. Howell defined his trip without a rope: "Climbing in single integral is a statement that I can climb this road with plenty of capacity, even if I screw it up a bit. Any idiot can be lucky once, the second is the only integral. If you do not want to at least repeat, then skip this. "