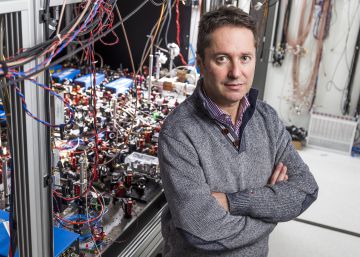 Google announced on Wednesday a milestone of quantum computing. One of its prototypes has achieved what is known as "quantum supremacy": make an operation in a few minutes that in a conventional computer would take thousands of years. IBM, which also develops a quantum computer, questioned the finding, and argued that its largest supercomputer was able to replicate the experiment in 2.5 days. The commercial debate is already served, but there is little doubt in the scientific community that quantum computing lives days of passion and glory. Juan Ignacio Cirac (Manresa, 1965), director of the Max Planck Institute for Quantum Optics and one of the most reputable Spanish scientists, describes here the moment in which he lives his discipline.

Reply. Yes, we are living very special moments. Those of us who have been working in this field for 20 years were waiting for this kind of interesting thing to start happening, although it has been more or more two or three years ago when technology companies began to show their interest in building quantum computers, and then governments when much more interest sprang up. That said, there is enthusiasm, but also a lot of caution. These results do not indicate that we already have a quantum computer.

P. But it seems that there is no going back. The 53 qubits Google computer works and is a milestone.

There is enthusiasm, but also a lot of caution. These results do not indicate that we already have a quantum computer

R. Yes, it is a milestone. It can be argued if it goes much faster or just much faster than a conventional supercomputer, but that is details. There has been a very important change of prototypes, which were quite imperfect, to this prototype that already works much better than the others. There has been a leap that makes new doors open.

P. What are the next immediate steps, for next year?

R. Three things: put some more qubit, reduce errors and start looking for interesting applications. We already know that if we had a very large and error-free quantum computer, we could do many things. The problem is that these prototypes that we have now are not large and still have errors. But that does not mean that only with some improvements these prototypes can already help solve interesting calculations better than classic computers. These companies – Microsoft, IBM, Google – are already thinking about how to help solve these problems.

P. The researcher Scott Aaronson compare this milestone not with the arrival on the Moon, which was achieved and period, but with the eradication of measles, where conventional computers improve a bit and trace their unevenness with quantum and there is a transition stage of two steps forward and one back .

R. It's something like this. Exact. But there is another analogy even better, that you have already used, which is that of the Wright brothers and the first flight compared to commercial flights. Those prototypes showed that you could fly 100 meters, but that still didn't work at all. To get to commercial airplanes, many years were missing. The same goes for quantum computers. But now the interesting thing is to go that way to the large quantum computers and while we do look if these small first "quantum flights" already help to make some application.

P. There is a second comparison proposed by Aaronson: the Kasparov chess game against Deep Blue. First Kasparov won, then Deep Blue by a little, but Kasparov himself admits that a few years later he had already lost by beating.

R. This is a very good analogy with respect to quantum supremacy. Now the Google quantum computer has done something that would take more time for a classic computer, but perhaps there is still a more refined algorithm to better program the classic computer and that now, in two months, yes, it wins that of Google. But when the quantum computer starts adding qubits and eliminating errors, there will be no way to win it.

P. Google researchers point out that their contribution is good for the discipline, and that in the end it is good for IBM to respond as it has done, refining its processes to obtain better results with a supercomputer.

R. It is very good news and it is not the first time that happens. There have already been times when scientists have come up with algorithms to solve problems with quantum computers and that, seeing them, other scientists have proven that these ideas could be used for algorithms in classical computers. This race therefore had already triggered interest in the software. In the case of IBM there is an additional detail: IBM has its own quantum computer and they are competing, but it seems that Google has surpassed them. And they try to counteract it.

P. It is a more commercial battle.

R. In the scientific community it also occurs. When there is significant progress, there are several groups of scientists who are trying to make it in the world. When some announce it the others have the right to doubt that they have really managed to do what they say. It may not happen at this level, which appears in all newspapers, but it happens.

P. It has happened with other technologies, such as autonomous cars. They emerge from the cave, people pay close attention to them but then disappear until they are fully ready for deployment. Will this valley be the same with quantum computing?

R. That is going to be like that, because to have quantum computers, it really takes a lot of time for technological development. But in that dark time, in that valley of death, new ideas also emerge, new directions that perhaps have more applications than the original ideas. Scientists continue to work, and the fact that the industry is overturned helps us a lot.

P. The leader of the Google team, John MartinisHe said that to destroy the current encryption systems a quantum computer of 100 million qubits will be needed. Now we have one of 53.

R. Exact. But in the photo of that computer, if you look, there are lots of cables. For each qubit you need at least one cable that must also be at a very low temperature. Imagine if you have to put 100 million cables. They do not fit. You have to look for other technologies.

P. There is talk of long-term applications to improve fertilizer production or improve materials and batteries. But will we see anything before?

R. These first computers are not going to solve those big problems. These small computers have no impact on large applications. But since they can do something better than classic computers, perhaps they can help with problems that are not strictly academic. In that the community is turning. They can be things like solving optimization problems, such as the so-called traveler problem, which has to go through many cities and choose the shortest path, which is a very complicated problem for supercomputers and perhaps these first quantum computers can help. It is not such a theoretical problem because a transport company must solve it. Then there are the issues related to the processing of data in artificial intelligence so that it goes faster. There are also more exotic experiences, such as a random number generator that cannot be falsified and are certifiable.