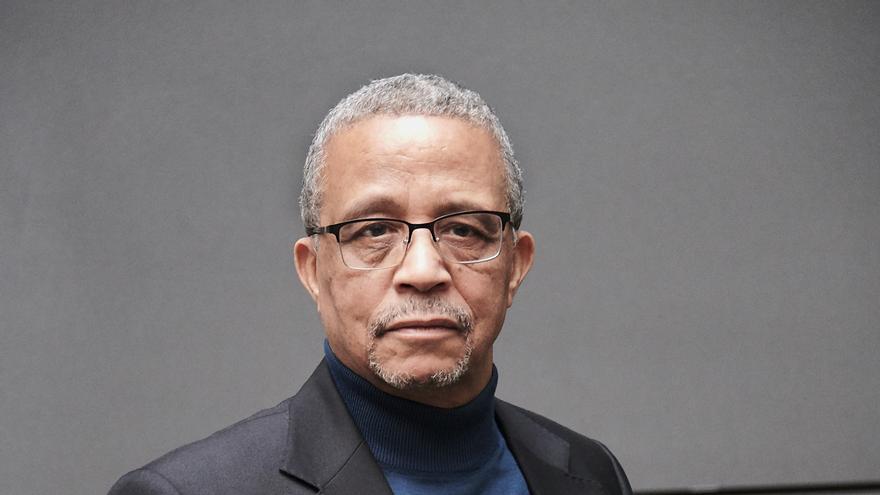 The salt of all forgetfulness It is the 27th novel by Yasmina Khadra and the 32nd by Mohammed Moulessehoul. The Algerian writer with a woman’s name says goodbye to the literature with this work and two more that are ready to see the light. “I’m not tired, but I want to leave because I’m tired of living in unhealthy environments,” he admits in a video call with elDiario.es. He refers to the publishing and media sector in France, which he describes as “racist” without shaking his voice. According to Mohammed, the French have been doing the vacuum for years and that is why he prefers to chat with foreign journalists and those outside his host country.

But the promotion of his latest novel has coincided in Spain with a phenomenon that has taken him by surprise: Carmen Mola. The revelation of the three screenwriters who hid behind a female pseudonym has once again put their personal case on the table.

Yasmina Khadra has been the touchstone against which to compare Carmen Mola’s editorial trick. And no one better than him to explain the differences. The first is that his latest novels have a photo of Mohammed himself on the cover, so there is no room for doubt.

“Aren’t Carmen Mola’s novels good?” “Well, it is what it is today,” he continues without waiting for an answer. “It is not a good time for genius, but for deception. It is not a time for generosity, but for opportunism. It is not the time of wisdom, but of false maneuvers,” he reflects. Although he proclaims himself as a firm defender of the work in front of the author, he recognizes that he was far from choosing a female name as a strategy to favor his sales: “Mine was a matter of life and death,” he reveals.

Mohammed was born in 1955 in the Algerian desert. His mother was a nomadic woman and his father an army nurse who enrolled him in a military academy when he was just nine years old. His first novel, HouriaHe wrote it in the barracks at the age of 18, but did not publish it until a decade later, in 1984. By 1989 he had already written five books under the skeptical gaze of his superiors.

“At that time I was the only writer in the Algerian army and I never saw a military officer open a book. Reading was not in the army’s tradition and, in general, the authorities had always considered writers as subversives,” he reveals . All his manuscripts had to be reviewed by a military committee without any training or literary interest. Not only did this committee decide whether to pass the screen or to censor certain parts, but it could rule that Mohammed was a threat to national stability. But stopping writing was not an option because literature was his “only refuge.” It was then that he created Yasmina Khadra. The idea was given to him by his wife, giving him her two maiden names.

The phrase she pronounced then has gone around the world: “You have given me your name for life and I will give you mine for posterity,” he repeats. Mohammed defines it as an act of mutual “love and respect” and as a way of linking his wife “to what he was most attached to: writing.”

The first novel as Yasmina Khadra was The madman with the scalpel (1990). In that same year he took out The Foire des Enfoirés and The caliphs of the apocalypse (1991). All three were novels with little reader success until it arrived Morituri five years later, the first installment of the trilogy by curator Brahim Llob. “Perhaps one of the reasons for my lack of success was the female pseudonym, especially in the Arab world,” he acknowledges, which is another distinction with Carmen Mola’s strategy, conceived from the beginning with a commercial component.

As sales increased and the ability to remain anonymous became difficult, Mohammed decided to come out and reveal who Yasmina Khadra was. It was 2001. A year earlier he had managed to graduate from the Algerian army, travel to Mexico and then settle in France. On The writer (2001), took advantage of his own story to write about the pseudonym and start giving interviews as Mohammed Moulessehoul, although he decided to continue signing the novels as Khadra.

“A work only exists when it is talked about. And the proof is that for three years I have been boycotted by the press and my books have not performed so well in France. Promotion is important, especially at a time when the talent does not make the success but the noise around it, “he says. But why choose a nom de plume of woman?

“If I had only wanted to protect myself, I would have chosen any name,” he says without going into more detail. Instead, he acknowledges that “it has been a pleasure to change some mindsets.” She assures that, in a “macho world like the Arab-Muslim”, some men have begun to sign as women thinking that “perhaps they were going to become famous people”: “They do not understand that feminism is not what gets the celebrity of their author, but his talent. ”

While he believes his pseudonym has been able to help open the publishing market more to women with Muslim names, Mohammed denies that Yasmina Khadra was a decoy. “I think that when you talk about literature you have to talk about the work. The author can be anyone, it doesn’t matter, but the work is unique, it is the one that survives the writer and the one that illustrates minds,” he defends. For him, the pseudonym is nothing more than a “lifting”.

Nor has he tried to print any feminine traits in his texts. In fact, the first novel she wrote with a gender perspective was The dishonor of Sarah Ikker, in 2020, which had as a backdrop the abuse of women in the Maghreb. But he has taken advantage of his anonymity to avoid falling into any taboo.

“I prefer not to hide anything from the reader. I grew up venerating literature and for a long time I was unable to separate the writer from his work. For me, when a work was beautiful, the author was also beautiful. But I discovered that it was not true, that the work could be beautiful and the author monstrous. ” He does not believe that he has misled his readers even during that decade of anonymity. “Now everyone knows that I am a man and the only very offended are in the Arab world, but I don’t care because I am very grateful to this pseudonym,” he admits. “Saved my life”.

With The salt of all forgetfulness Published by Alianza Editorial, Yasmina Khadra recalls the Algeria of his youth through Adem, a teacher abandoned by his wife who does not raise his head. In which a hopeful atmosphere floats that the protagonist is unable to catch. “It was the moment of independence from France, when there were many disappointments and much contempt. I wanted to narrate that nervous depression that reigned even though it had no reason to be,” he says. This parallel between Adem and the Algerian people reveals “a kind of break with all the dreams that animated us during the liberation war.”

This type of “white” novel has been interspersed during all these years with the detective novel and with the more political books. Mohammed has stepped into the shoes of a terrorist in Khalil (2018) and even in that of Muammar Gaddafi in The last night of the Rais, although he admits that this is his hardest novel. “It is the one that made me suffer the most because it was something more physical than mental. Gaddafi got into my dreams every night and I swear that I woke up sweating. However, it was the one that took me the least time to write: about three weeks,” he reveals.

A man who writes at the rate of one book a year could be assumed to have a certain withdrawal syndrome from now on. But he denies it. “I will continue writing, but not publishing because I do not want to suffer more,” he emphasizes about the alleged mistreatment of French literary circles. Now that he can barely read due to a failed cataract operation, the only relationship he has with literature is his own shorthand texts on a huge computer screen. “I have become my favorite author,” he jokes.

“I think I have written excellent books. I have never cheated my readers and I will miss them. But when you are a true talent, you cannot live as an outcast. I will not allow worthless people to do to me. more damage, “he concludes.