'No one was looking towards here' rescues the memory of the creators and groups that in the worst years of the HIV crisis used art to denounce the silence and collusion of governments, pharmaceutical companies or the media

No one was looking there. Although it had been circulating around the country since the end of the 1960s, and in June 1981 the first official cases of the disease were reported, ronald reaganthen president of the United States, did not publicly pronounce the word AIDS until October 1985. No one was looking there. And if they did, it was condescendingly or pitifully, if not outright hateful. "AIDS is not only God's punishment for homosexuals, it is God's punishment for a society that tolerates homosexuals," said the preacher Jerry Falwelland the former mayor of Houston Louie Welch came to propose as a solution "shoot the fagots".

At people living with HIV, including a handful of artists, had no choice but to organize themselves to build the counter-narrative. And they did, leaving a trail of posters along the way, flyersstickers, t-shirts, installations, films and other actions that constitute what Andrea Galaxina, alias of the art historian Andrea Díaz Cabezas, calls "some of the most profoundly political and radical works of contemporary times" in No one was looking this way. An essay on art and HIV/AIDSthe book that she herself has just self-published on her own label, El Primer Grito.

"The importance of the art that was produced in the context of the HIV/AIDS crisis," he writes, "is based on the fact that it served, first of all, to articulate all the knowledge accumulated by anti-AIDS activism as well as to spread that knowledge; also in that it worked like a political analysis of the crisis pointing out the culprits and doing informative work. And lastly, in that he transformed the sick body into a political body."

Collectives such as Gran Fury in New York, Akimbo in San Francisco or General Idea in Canada strove for direct, radical work permeated by urgency that often questioned some of the traditional assumptions of what art is and that in some cases transcended the circumstances and environment for which it was made.

Perhaps the clearest example in this regard is Silence = Death, a poster devised in 1986 to underline, in the words of one of its six authors, Avram Filkenstein, "the lethal effects of passivity in the face of crisis." It couldn't be simpler: on a black background, a pink triangle with the vertex facing up, a white legend that says "Silence = death" and a small text calling for action.

The triangle referred to the mark of prisoners in Nazi concentration camps, a circumstance that was partly problematic because of its victimization, although they were wrong: the mark of genocide is an inverted triangle. They didn't realize it until they saw the printed poster, but they welcomed the mistake, partly because it saved those misgivings they had "and also because it referred to New Age spirituality, which is a roll in which they were all a little", explains Díaz Cabezas in conversation with EL PERIÓDICO DE ESPAÑA.

The poster was posted on the streets of New York in March of that year and was distributed by LGBT bars and bookstores. Some, including the famous Oscar Wilde, rejected the offer to put it. But 36 years later, that poster and that slogan, silence = death, continue to be an icon beyond AIDS activism that, as Andrea Galaxina says, "anyone recognizes or knows and that continues to function at other levels such as racism or homophobia, because it continues to challenge with the same force".

On the cover of 'New York Crimes'

Among all those names and groups that were using art as a weapon against the epidemic, which were not that many either, although they were very active and very radical in their message, stands out Gran Fury, linked to ACT UP, the main protest movement of people with HIV . Finkelstein would be an important part of this group made up of 11 artists who in the second half of the 1980s and early 1990s displayed sharp activity.

His actions often took place in public space. they photocopied 10, 50 and 100 dollar bills with the inscription "Fuck your profits" to protest against the attitude of the pharmaceutical industry and distributed them on Wall Street. They made their own version of the New York Times to denounce the insufficient coverage of the crisis by the media, the new york crimesidentical in appearance, opened the vending machines and wrapped with it the copies of the Times of that day. Invited to design a campaign for buses in New York and other cities, they photographed gay and lesbian couples kissing, at a time when misinformation, homophobia and fear were running free, under the title: "Kissing does not kill; indifference and greed, yes".

The Pope and the penis

In 1990 the group participated in the Venice Biennale, where they starred in what was perhaps their most notorious action. on the construction site The Pope and the penis They rescued the image of an erect penis that they had previously used in a poster to promote the use of condoms at a size of more than half a meter and compared it to one of Pope John Paul II along with a text with some statements by a New York cardinal: "The truth is not in condoms or clean needles [...] Good morals are good medicine.". "It was a scandal," says Díaz, "the president of the Biennale threatened to resign if the image of the Pope was used, which achieved the desired effect and not only was the work widely discussed, but it also helped to give visibility to the situation of people with AIDS in Italy".

Gran Fury was active until 1996, when one of its members, Mark Simpson, died. His work, and that of other groups and artists collected in the more than 240 pages of no one looked this waycontributed to concrete achievements such as the flexibility in drug approval or the fact that the AIDS case definition made by the US Centers for Disease Control and Prevention also included conditions that developed mainly in women, a circumstance that until it was recognized had left a large part of the female population with HIV undiagnosed. 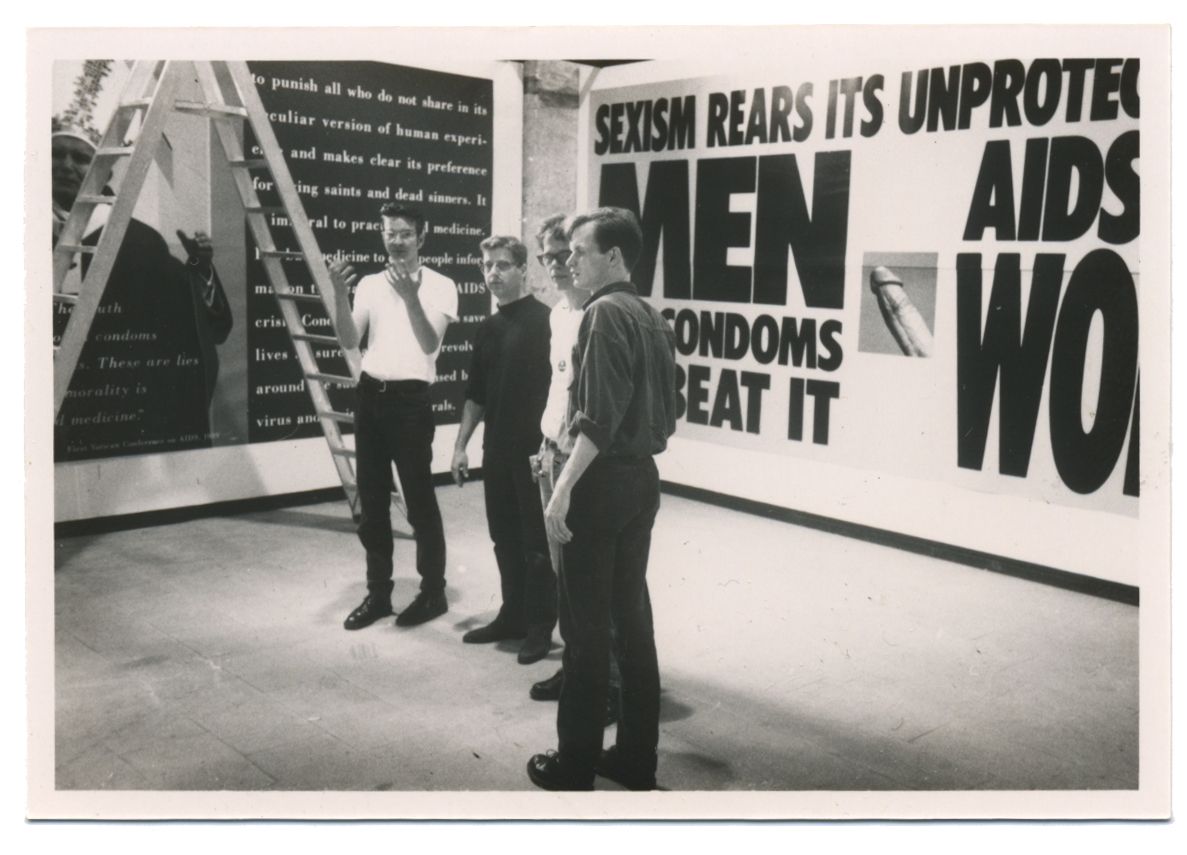 But above all they opened a crack. "His proposals for him were absolutely radical," recalls Díaz. "They questioned, in a quite shocking way, concepts that are at the base of the history of Western art since the Renaissance such as the notion of author, the originality, the uniqueness of the work... And, in a certain way, they showed that art, perhaps not on its own, but that it is one more instrument to change reality".

"What the AIDS activism of those years tells us," he concludes, "is that it is possible to radically transform reality using means and strategies that are not what the system foresees. At a time when no one I was paying attention, in that they were dying disgustingly abandoned, they wove a support network. And art was part of those structures".